Why more presidential hopefuls are embracing the Donald Trump way

Trump's say-absolutely-anything attitude is catching on 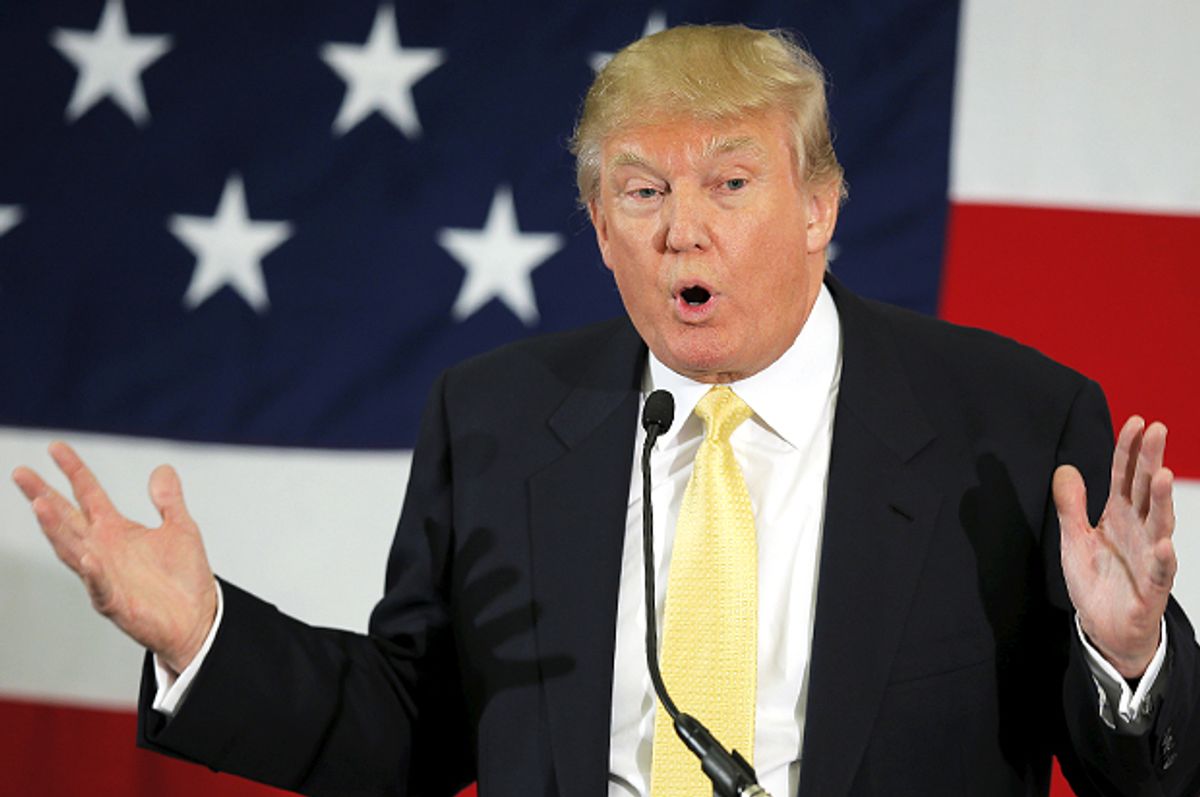 Since announcing his 2016 White House bid, Donald Trump has been the central focus of the campaign -- by one estimate, he has garnered almost 40 percent of all election coverage on the network newscasts. Clearly, The Donald’s attempt to turn 1600 Pennsylvania Ave. into Trump White House has attracted so much attention because the candidate is seen as a Bulworthesque carnival barker who will say anything, no matter how hypocritical, factually unsubstantiated or absurd.

Yet for all the hype he’s generated, Trump is not the only presidential hopeful willing to make utterly mind-boggling statements.

Take Hillary Clinton. Earlier this month, she said, “there can be no justification or tolerance for this kind of criminal behavior” that has been seen on Wall Street. She added that “while institutions have paid large fines and in some cases admitted guilt, too often it has seemed that the human beings responsible get off with limited consequences or none at all, even when they have already pocketed the gains.” Her campaign echoed the message with an email to supporters lauding Clinton for saying that “when Wall Street executives commit criminal wrongdoing, they deserve to face criminal prosecution.”

Clinton’s outrage sounds convincing at first -- but then, audacity-wise, it starts to seem positively Trump-like when cross-referenced with campaign finance reports, foundation donations and speaking fees.

According to an Associated Press analysis, Clinton has already raked in more than $1.6 million worth of campaign contributions from donors in the same financial sector she is slamming on the campaign trail. Additionally, Clinton’s foundation took $5 million worth of donations from at least nine financial institutions that secured special deals to avoid prosecution -- even as they admitted wrongdoing. The Clintons also accepted nearly $4 million in speaking fees from those firms since 2009.

Oh, and that anti-Wall Street email from Clinton’s campaign? It was authored by Clinton aide Gary Gensler, a onetime Goldman Sachs executive who later became a government official.

Then there is Jeb Bush. He recently trekked back to Tallahassee to deliver a speech portraying himself as a clean-government reformer. He asserted that before he became Florida governor, "lobbyists and legislators grew a little too comfortable in each other's company” but he also insisted that he “refused to go along with that establishment” and “wasn’t a member of the club.”

A review of Bush’s own gubernatorial emails shows that he was very much a member of the club. He sought public policy counsel from lobbyists on everything from government contracts to medical malpractice legislation to state land purchases. Bush also approved a plan for corporate lobbyists to help his administration pass a bill exempting the state’s pension investments from Florida’s open records laws. And, of course, he is now raising presidential campaign money from lobbyists.

Bush’s speech, which bashed legislators who become lobbyists, was held at Florida State University -- a school whose president had previously become a lobbyist after serving as Florida House speaker. If all that wasn’t enough, emails show Bush’s event at FSU was arranged by the Florida Chamber of Commerce -- a corporate lobbying group that has funneled cash to a political action committee backing Bush’s presidential campaign.

In these and so many other spectacles, the candidates appear to be assuming that voters will never know any context -- they are assuming, in other words, that voters are goldfish who will forget their entire world every 15 minutes or so.

Trump may get all the attention for flamboyantly embodying such a cavalier attitude. However, the cynical view of the electorate -- and the attendant say-absolutely-anything attitude -- has now become the pervasive zeitgeist of the entire 2016 campaign.