Amazon ruined our "gayborhood": Tech-bros are swallowing up Seattle's Capitol Hill — are LGBT districts across the country endangered? 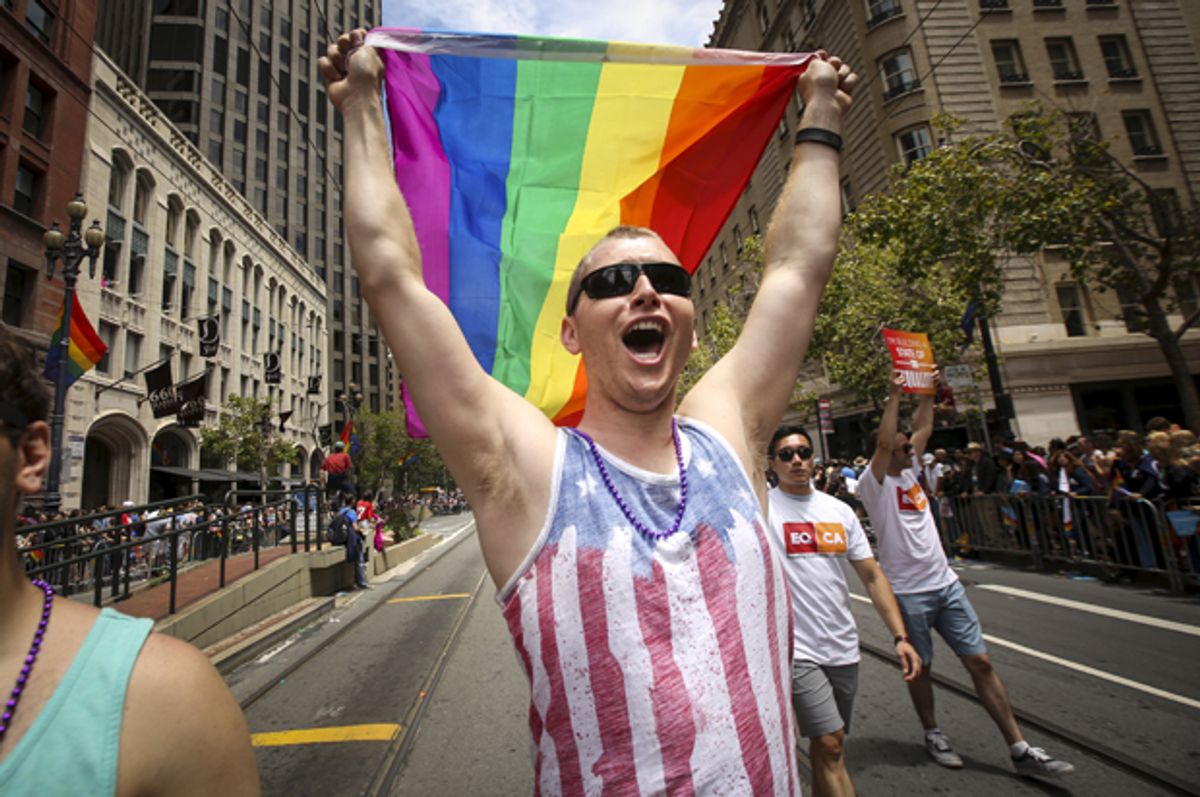 “They’ve taken an area that was formerly a home for gay people, for queer people, for artists,” says John Criscitello while showing me around Seattle’s Capitol Hill neighborhood, “and they’ve turned it into a destination drinking spot.”

Criscitello, an artist who lives and works on Capitol Hill, is 48 years old but looks a decade younger. He’s tall and muscled, with tattoos covering most of his skin and blue eyes that stand out against the gloomy Seattle sky. He hasn’t been in the city long -- he moved from New York just four years ago -- but in that short time, he’s seen the neighborhood change immensely. His guerrilla posters, wheat-pasted to buildings and telephone poles, say things like “Welcome rich kids” and “We came here to get away from you.”

For the last half-century, Capitol Hill has been Seattle’s Castro, its Boystown, its Gayborhood. Well before they could get married in Washington or any other state, gays and lesbians could find community, safety and affordable housing on the Hill. But Capitol Hill has moved from a place that was a little gritty, a little divey and very queer to a party zone for straight people. Weekends on the Hill feel like Mardi Gras, and bars that were once reliably safe for the queer populace are filled with the neighborhood’s new residents -- heterosexual tech workers and their girlfriends. The two cultures -- the old queer folks, the new tech workers -- sometimes clash, and in the most liberal neighborhood in one of the most liberal cities in America, hate crimes are on the rise.

For Criscitello, the shifting nature of the neighborhood isn’t just about losing his seat at the bar; it’s about his ability to stay in the city at all. The average rent in Seattle is now more than $1,800 a month, a 40 percent increase in the past five years, and it’s only getting higher. Purchasing a home is even more out of reach. In this once working-class city of lumbermen and Boeing machinists, the median home price is now $535,000, a 19 percent increase since March 2014, and bidding wars are common. Redfin reports that more than 40 percent of homes are going over the asking price, many in cash. As longtime Seattle realtor Penny Bolton told me, “People are coming here who make a lot of money, and they’re coming from places where they had a lot of money.”

Capitol Hill is just a few miles from Amazon’s Seattle campus, and thousands of tech workers have moved to the neighborhood in the past few years. With the influx of highly paid software developers and engineers, the cost of living has risen, driving out many working-class queer people and artists. Tim Ellis, a real estate agent and editor of SeattleBubble.com, explains the population shift this way: “It’s hard to find good developers, so tech companies are hiring outside Seattle, bringing in people from the Bay Area who come in with a really high income. That can’t not have an effect on prices.”

The rising prices determine not just who can afford to live in the neighborhood, but what the neighborhood actually looks like. Criscitello points out all the new construction, and there is a lot of it. There are new developments on nearly every block, and cranes rise high over the skyline. This was once a neighborhood of auto dealers and single-family homes, and the old low-slung, one-story buildings are being torn down as luxury apartments with corrugated metal siding go up.

“This building on the corner of 11th and Union is just gigantic,” Criscitello says, pointing to a gleaming, glass-encased structure. “And it's not even the biggest one. If developers agree to preserve the facade, which is about a 2-foot-thick section, then they can build higher. It's kind of a metaphor for what's actually happening: They're destroying the neighborhood and giving you this fake idea that it's still what it was.”

Criscitello isn’t alone in his complaints. Shelly Brothers is the co-owner of the Wild Rose, the oldest (and only) lesbian bar in the city. The Rose is a little dark, a little spare, with not much on the walls besides rainbow flags, and it’s on the busiest block in Capitol Hill, right in the heart of the Mardi Gras. I spoke with Brothers one afternoon after the bar opened. There weren’t many customers yet but by nightfall there would be -- mostly lesbians, sure, but more and more straight folks as well.

“People come from all over,” Brothers says, “and they have no idea that the Hill is gay.  But it was pretty amazing when I moved here. Thirty years ago, we were one of the only places on the block. There was a lot of housing that was pretty cheap to move into, pretty cheap to stay in, and the landlords would let you do what you wanted with it. That was very conducive to the gay community.”

But no more. Many of the new developments seemed designed to be exclusive. They have underground parking, rooftop patios and private gyms. The businesses that have cropped up to serve these residents are pricing out the very places that once made Capitol Hill interesting. “Nobody I know has $30,000 to pay first, last and a deposit on any of these retail spaces,” says Criscitello. “One by one, the places where people of modest means can shop disappear, the places where they can eat disappear, and they places where they can live disappear.”

Seattle is hardly the only city with a disappearing gayborhood. The rapid gentrification of cities from San Francisco to New York has resulted in the displacement of queer residents in many historically gay districts, and the evidence isn’t just anecdotal -- data backs it up as well. In "There Goes the Gayborhood?" Amin Ghazian analyzed the “index of dissimilarity,” which demographers use to measure segregation, and reported that San Francisco’s Castro, Chicago’s Boystown, and New York’s Chelsea neighborhoods have 8 percent fewer same-sex male households and 13 percent fewer same-sex female households than a decade ago. In Capitol Hill, the shift is even more dramatic: The number of same-sex households fell 23 percent from 2000 to 2012.

And as the people go, so do the businesses that serve them. The last lesbian bar in San Francisco, the Lexington, closed earlier this year. The bar’s owner, Lila Thirkield, announced the closure on Facebook: “When a business caters to about 5 percent of the population,” she wrote, “it has tremendous impact when 1 percent of them leave. When 3 or 4 percent of them can no longer afford to live in the neighborhood, or the City, it makes the business model unsustainable.”

“San Francisco as we know it is dying,” wrote Samantha Allen on the Daily Dot,  “and the closing of the Lex is nothing but the most recent warning sign that the city is being consumed by wealthy white heterosexual culture.” Wealthy white heterosexual culture will soon have a new hangout: The Lexington was purchased by former San Francisco Mayor Gavin Newsom’s upscale restaurant group.

The shrinking gayborhood can’t be entirely attributed to gentrification. For starters, not every LGBT resident is going to be priced out if rents skyrocket — only the most vulnerable to a spike in living expenses. And as homosexuality has become more accepted in mainstream American culture, queer people have assimilated. You don’t necessarily have to move to a gayborhood now; you can be gay in suburbs or small towns without worrying about discrimination in a way that wasn’t as possible even just a decade ago. And, many argue, gentrification actually starts with the gays. As columnist America Foy wrote in the San Francisco Bay Times, “Our community went to depressed areas and spiffed them up. Our community started businesses in those neighborhoods. Our community elected politicians in those areas to represent us. So, for those railing against gentrification and unaffordable housing in San Francisco, here’s a simple reminder: It’s all our fault.” No matter whose fault it is, the shift is happening, and quickly.

In Seattle, not everyone is concerned. Advice columnist Dan Savage has lived in the city for nearly 30 years, and he sees angst about the evolution of the city as misplaced nostalgia. “Seattle was already ruined when I got here,” Savage says. “Every few years there seems to be a fresh wave of people claiming that Seattle's golden era was 11 minutes ago and now it's past. We have to be rational urbanists about the way cities work,” he continues. “Neighborhoods rise and fall. Queer neighborhoods shift around. Pioneer Square was the queer neighborhood in the ‘20s and ‘30s and ‘40s and we don't rend our garments all day long about whether or not Pioneer Square is still gay enough to suck a dick in. I'm not trying to be complacent, but a new queer neighborhood will rise.”

And yet, Savage doesn’t have to worry about getting pushed out -- he owns a home on one of the nicest streets in Capitol Hill. It doesn’t matter how many tech engineers move to the neighborhood; he’s a bestselling author and syndicated columnist. His money insulates him from rent hikes and housing speculation. But it’s clear as you walk around Capitol Hill today and see as many Seahawks flags as rainbow flags that the gayborhood is changing, and quite possibly, dying.

Still, John Criscitello isn’t ready to give in just yet. We pass by one of his posters pasted to an electrical box. It says “u r a dick,” with the Amazon logo turned into a cock and balls. “This influx of money comes in and it smothers queer culture. It can start to end. It is ending right now,” he says. “But I'm a tough old dog. They can try to drive us out, but I always find a way. I won’t be banished just yet.”

Katie Herzog is a staff writer at Grist.org. Her writing has appeared on Salon, The Guardian, Vox, and she currently at work on a book of essays called "Not Safe For Work."