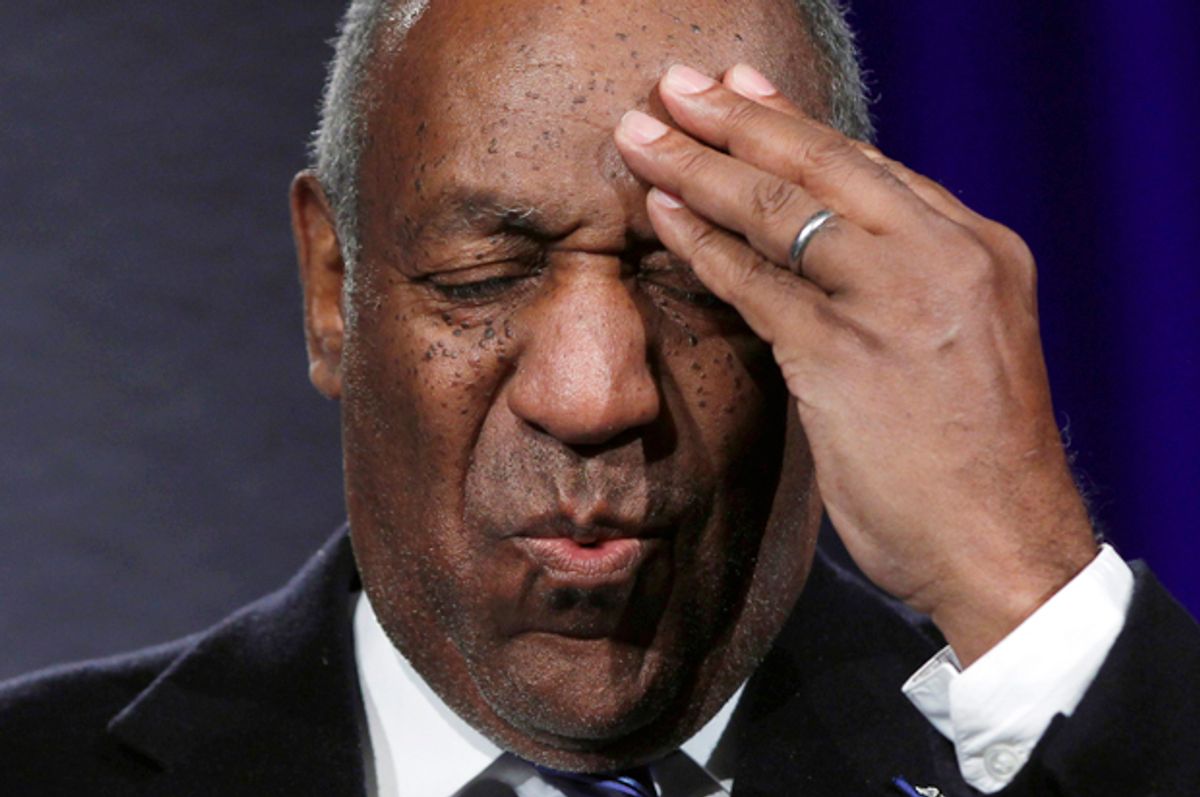 Just before the Cosby sexual assault allegations reached their tipping point, journalist Mark Whitaker released a biography of Bill Cosby entitled "Cosby: His Life and Times" that both overlooked and neglected to further investigate the sexual assault allegations that had dogged the man for many years. It's difficult and painful to read in hindsight, given the proximity of the biography's release to the wave of abuse charges that followed, and given the dark double life Cosby has been accused of leading all these years.

But looking back, there are many other profiles of and interviews with Cosby that are equally tough to read given what we know now about Cosby’s status as an alleged serial rapist who has now been accused of sexual assault by more than forty women, whether because of how naive they seem in hindsight, or because of how ominously foreboding they are. Here’s a look at nine of them:

This profile of Bill Cosby’s marriage from the late ‘80s lauds Cosby and Camille for their loving marriage and stable home life and compares the couple to their “Cosby Show” counterparts.

"Cosby is a man who has always made clear choices and given them public dignity. He made a choice from the very beginning to be a black comedian who does universal humor, just as he made a choice to marry a lovely girl named Camille 22 years ago and remain true to that union. He knows better than anyone the special kind of beauty a marriage that has endured brings to his life and his art. "My life is a very, very happy one," he says. "It's a happiness of being connected, of knowing that there is someone I can trust completely and that the one I trust is the one I love. I also know that the one she loves is definitely the one she can trust.” Who would expect less from a man like Bill Cosby and a woman like his wife? And who could ask for more - in marriage or in life?"

In another fawning profile of Camille Cosby, this New York Times picture paints an idyllic picture of the pair’s marriage, including Camille's fond admonishments when Bill has "gone too far."

"Like her husband's wife on the television show, a character who was based on her, Mrs. Cosby juggles the roles of mother, wife and professional with skill, calm and an old-fashioned sense of right and wrong. Friends say she is still the first to laugh at her husband's jokes and understands his need to be "on" all the time, without competing with that need. Whenever she thinks he's gone too far, she responds with an endearing, 'Oh, Billy.'"

In the New York Times in 2004, Cosby defends his inflammatory remarks about the behavior of poor black people, during which he addresses himself in the third person, turning an interview with a journalist into a bizarre act of moralizing performance.

''Mr. Cosby was addressing the 50 percent dropout rate that he knows to be true,'' Mr. Cosby said of himself in a telephone interview from San Francisco, where he was raising money for a program to get teachers into low-income schools. ''Was Mr. Cosby taking about all lower-income people? No.’'

In a 1984 TV Guide profile of Cosby, writer Kathleen Fury details Cosby’s abusive behavior, calling the interview “unpleasant,” dubbing Cosby “one of the most arrogant celebrities” she had ever met and noting that Cosby holds grudges against journalists who pry too far into his personal life.

“Bill Cosby doesn’t like journalists much. He bears grudges toward a number of publications that have, in his opinion, ventured into too-personal areas of his life. For example, TV Guide published an article 15 years ago that told how many cars he owned. He mentioned it to me at least twice, in anger. Perhaps as a result, our interview was unpleasant. He made no attempt to be amiable and was by turns combative, defensive, challenging, threatening and hostile. The most innocuous line of questioning could set him off. ‘I haven’t read much about your father,’ I started, since his new show is about fatherhood and family life. ‘My father has nothing to do with this show’ he snapped."

In a 1992 feature for the Associated Press, writer Dana Kennedy finds him similarly menacing, writing later that "Cosby immediately took control of our interview by treating me to a fairly hostile 14-minute discourse on why he distrusted the press."

“I don’t pose,” he says, pouring a cup of coffee and lighting a cigar. It may sound like a simple warning. In fact, it’s one of many. Cosby settles into his deep-pile gray sofa, flanked by four rag dolls with black faces and one snow white teddy bear. His face is unusually grave, the tension in the air remarkably thick. “Tell me what you want to ask and we’ll see how it goes,” says Cosby, slowly measuring his words. “If it doesn’t go well, I’ll give you a piece of fruit — I’ll give you an apple or a pear, and you can be on your way."

This Philly Mag piece from 2006, in the midst of the Andrea Constand civil suit, is very tough and fair, but features some chilling anecdotes about Cosby’s U.S. tour where he calls poor African American audience-members onstage in order to "get America’s underclass to take responsibility.” Below, we hear his onstage interaction with a woman named Quiana, who he brings up to tell the audience about how she recovered from "the excesses of drugs, sex and violence.”

Then Quiana tells her story, but she isn’t doing it to Cosby’s satisfaction, because, as she tells it, she was a mess, and then she found Jesus. A simple segue. Cosby has to join her, center stage.

“When you found out you were pregnant, how far ahead could you see?” he wants to know. “At 13, what were you ready for?”

“This is a wonderful message that I want to go out to parents who are afraid to talk to their daughters… But you’re skipping over the good parts. I want you to talk about how frightened your little behind was.”

Cosby won’t let her off the hook. No, there’s more to the story, having a baby at 14, and finally Quiana tells the audience:

“I didn’t become this little promiscuous kid just because I woke one day and became that. … I was sexually molested as a little girl for years.”

“It is a beautiful, and dangerous, moment. Cosby pushed her, which was important. Then he told Quiana the meaning of her story. He did not try to take away her idea that Jesus was a big help, though he made it clear: If you’re going to go to Him, you’re not off the hook. And, of course, she’s just the proxy for his message to the crowd, and the public-radio audience in Mississippi listening in, and anybody who will watch the documentary being filmed here and now. Bill Cosby wants the world to know: Personal responsibility is the name of the game.

A Time magazine profile from 2001 titled “I Do Believe in Control” has lots of portions that feel creepy in hindsight, detailing the intense control Cosby excerpts over all areas of his life, including when it comes to drug and alcohol consumption.

“Even Cosby's lifelong aversion to alcohol and drugs is described in terms of control: "After one drink, I wasn't in control anymore, and I didn't like that feeling." (Today Cosby collects fine wines to serve to friends, but he does not partake.)”

In a People Magazine piece praising Cosby’s late-in-life academic accomplishments, the comedian gives an odd shout-out to feminism when he explains why he turned down a role in a “Wizard of Oz” remake.

"He let down his own kids terribly when he was too busy to play the Tin Man in the film version of The Wiz, the all-black recasting of The Wizard of Oz. Actually, suggested Cos, 'In this age of women's lib, I'd like to see them have a Tin Woman.' As for himself, 'I'm not sure I wouldn't have made a better Wiz. Or it would have been fun to play the witch.'"

In a 1996 Ebony profile spotlighting Camille and their marriage, the author writes of Camille’s difficult time adjusting to Cosby’s extremely sociable nature and his “love of people,” as well as being “left alone at night” as Cosby hit the comedy clubs.

“Camille had to adjust to being left alone at night. She first tried going to the clubs where her husband was performing. But as the nights wore on, this became monotonous. “He used to introduce me to friends and say, ‘Why don’t you go out with so-and-so,’’ Camille remembers. ‘But I just might not want to go out with so-and-so. Finally I did meet people I liked and we would go out.’ Still, Camille did not like the waiting and it took her a good two months to become accustomed to it. And there were other difficulties. ‘I also had to get used to being with a lot of people,’ she explains. ‘I lost the privacyy I had known all my life. I also had to get used to entertaining and smiling and being gracious. This is natural with Bill. He’s much more of an extrovert than I am. He just loves people, period.”

Much of Smith's biography from 1997, replete with Cosby's moralizing, is alarming when read now, like when he talks about how disgusted he is to see so much rape on TV ("they all seemed designed to do the same thing -- show women having their clothes torn off") and when Cosby talks about his sex life as a middle-aged man.

"Now middle-aged, Cosby appeared to be coasting. He described slowing down in an article for Ebony. He wrote that he was having trouble keeping weight off, wasn't able to keep his body as finely tuned as he used to. As for such basics as food and sex, Bill felt these areas were also not going to get any better. 'When you reach middle age, you find that everything you eat turns to gas... your stomach changes, too, as to what it can and will accept.'  And in the bedroom, 'you come home late... you get into bed and touch and start to make your move. She says 'No' and you roll back over the other way and say to yourself, 'Thank you so much' because you were not all that serious in the first place. All you wanted to do was go on record."