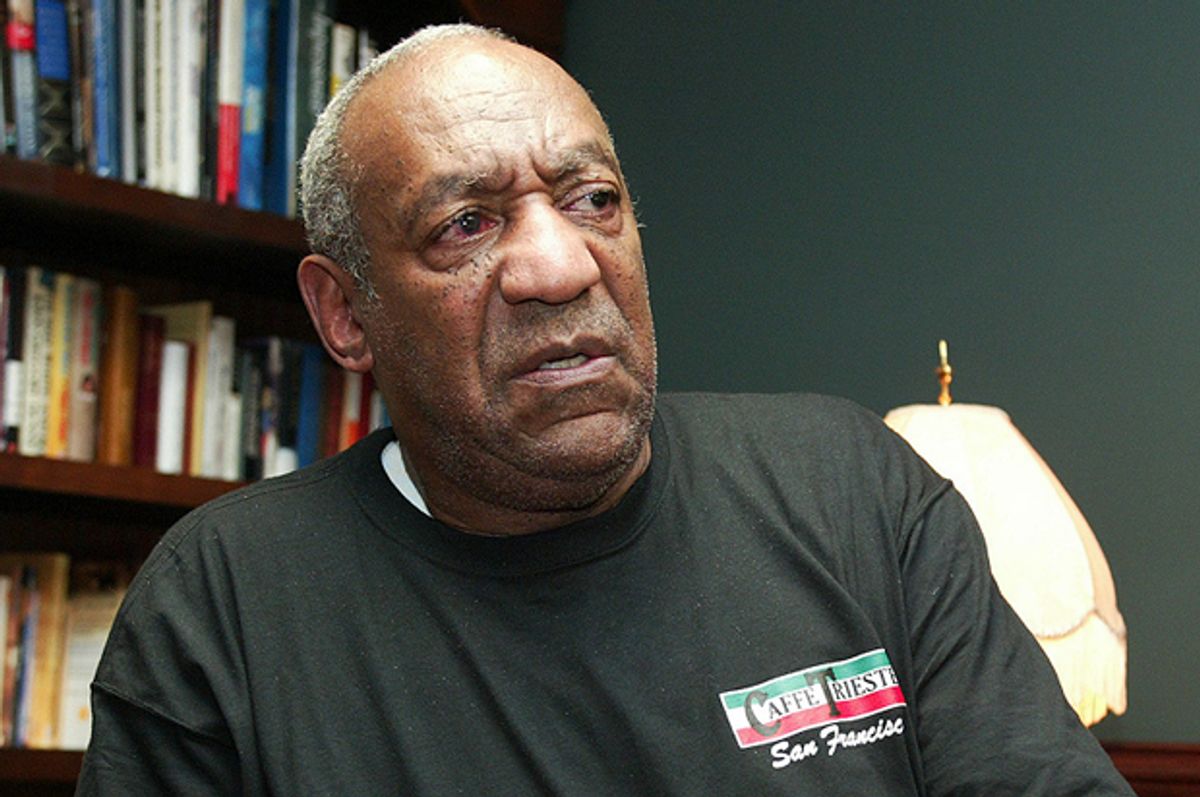 These are their faces. These are their names. And they're not even the whole group. They were friends, acquaintances, previous lovers. They are 35 who say that Bill Cosby sexually assaulted them, facing out from an astonishing New York Magazine story by Noreen Malone, with stunning images courtesy of Amanda Demme. And if you believe that the stories of nearly four dozen women over a span of nearly fifty years seem consistent and credible enough to be truthful, then you have to wonder why. You have to conclude the answer is: Because he wanted to.

Bill Cosby has spent most of his adult life as a powerful, rich, attractive celebrity. He has had an image both friendly and approachable, but just tart enough to suggest he had an edge in there too. And though his long-term marriage and children have been fodder for his entire persona, he could always get women. Lots of women. So he did. In a 2005 deposition, he cooly said, "I think I’m a pretty decent reader of people and their emotions in these romantic sexual things, whatever you want to call them." He mentioned affairs with "at least five women, and having a 'romantic' interest in two more."

But despite the fact as recently as this month headlines have still persisted in referring to his alleged favorite modus operandi -- drugging women -- as being about sex, this isn't about sex. This is about assault. This is about a very specific tactic that seems to have been what got this guy off. As author Alice Dreger observed Monday, "Cosby's consistency — I think this isn't 'just' drug IN ORDER to rape. Looks like being INTO drugging to rape (paraphilia)."

We've been hearing the accusations against Cosby for years. His settlement with Temple University employee Andrea Constand nearly ten years ago involved a dozen Jane Doe witnesses with similar stories: Cosby would give them a pill to relax. Cosby would offer them a drink. Then it would get very fuzzy. Some said they said they were touched inappropriately. Others claimed they were forced into sexual acts. Others only remembered waking up later with a sense of what had happened. Since last fall, dozens of other women have stepped forward, and though their outcomes have varied, the circumstances have had a chilling similarity. In the new New York profile, Victoria Valentino, who says Cosby assaulted her in 1969, says he told her, "Here, this will make you feel better." And then, she says, "I could hear the words in my head, but I couldn’t form words with my mouth, because I was so drugged out."

Former friend Joyce Emmons, who says it happened in 1979, recalls, "I had a terrible headache, and I said, ‘Bill, do you have some Tylenol? I have a mother of a headache.' And he said to me, ‘I have something stronger.'" And then, "and I had no clothes on, and there was Bill’s friend totally naked in bed with me." Barbara Bowman, who was a young model when she met him in the mid eighties, says that "Cosby drugged and raped [her] repeatedly; she didn’t realize for two years what was happening." Janice Dickinson says he gave her a glass of wine and then, "I woke up the next morning, after the incident, with my entire life altered forever, knowing that Bill Cosby had raped me."

Former publicist Joan Tarshis, who says Cosby raped her in 1969 when she was 19, concludes that she thinks Cosby's legacy has been forever altered because of the sheer number of fellow alleged victims who have spoken out — just as O.J. Simpson's was, despite his criminal trial acquittal. "When you hear O. J. Simpson’s name, you don’t think, Oh, great football player. That doesn’t come to mind first," she told the magazine. "I’m thinking it’s not going to be, Oh, great comedian. It’s going to be, Oh, serial rapist. And that will be our legacy.”

Back in a 2002 "Primetime" segment on serial rapist Matias Reyes — whose confessed to victims include the Central Park jogger — N.G. Berrill, the psychologist who examined him, said that "I think he's not dissimilar to a lot of predators…. or psychopaths. They enjoy the hunt. They enjoy preying on others." Three years ago, a fascinating, alarming conversation on Reddit explored rape from the perspective of assailants themselves, including one who claimed to be "a post-college age male who raped several girls through use of coercion, alcohol, and other tactics over a course of 3 years." he said he'd grown weary of "the sluts and sorority girls that would easily throw their c__t after you" and preferred the challenge of "a girl who was a bit damaged." And writing in the Washington Post in 2013 writer Josh White spoke to serial rapist Aaron Thomas, the notorious East Coast Rapist who's believed responsible for at least a dozen sexual rapes over the span of several years. In conversation, Thomas shed similar light on the workings of the mind of someone who sexually assaults again and again. "They were objects,” he said. “Whoever came down the street, an object." And he rationalized that because he stuck mostly to threats and overpowering his victims, "I never hurt anyone."

They did it because they wanted to. They did it because they could. Earlier this month, the Times asked experts about Cosby's alleged pattern — especially for involving incapacitating the women. "Doing it in this way would allow him to play out his fetish, but also to think of himself as someone who isn’t hurting women," said Robert Weiss, founder of the Sexual Recovery Institute. "It lets him off the hook, on a psychological level, because they’re not fighting him." And how can you have hurt a woman who wasn't fighting you, right? How could you have hurt almost fifty of them, even when they come out and say that you did?