Huckabee's sad desperation: Being the "outrageous" candidate is tough with Trump in the mix

The Holocaust, "Daisy," Dred Scott -- Mike Huckabee is working very hard just to get people mad at him 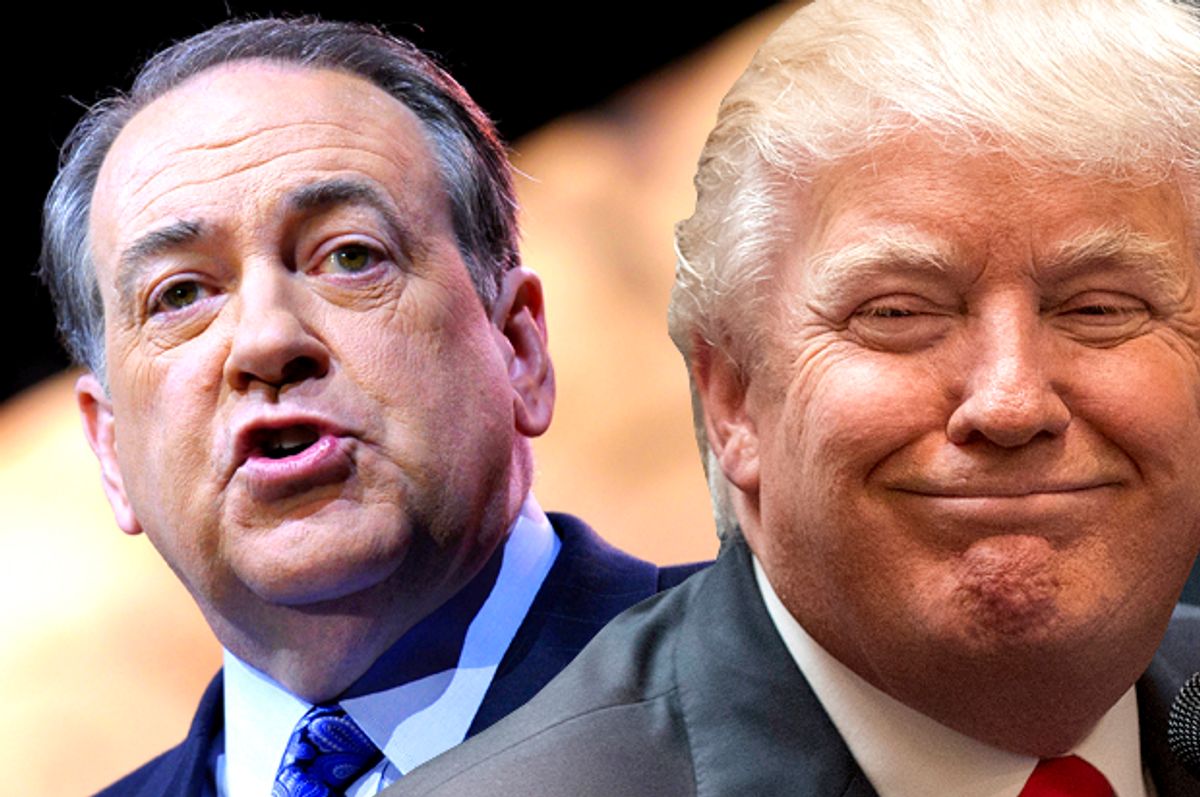 Republican presidential candidate and Bible-based cancer cure salesman Mike Huckabee made some news over the weekend when he drew a direct line between the multilateral diplomatic agreement over Iran’s nuclear ambitions and the Holocaust. The deal, Huckabee opined to Breitbart News, will “take the Israelis and march them to the door of the oven.” To Huckabee’s utter delight, he managed to draw a condemnation from President Obama, who said Huckabee’s remark “would be considered ridiculous if it wasn’t so sad.” The former governor of Arkansas has since transformed the quote into a tool for online engagement and it will almost certainly show up in fundraising materials before long.

While Huckabee is being roundly and rightly condemned, it’s not as though he’s particularly far afield from the mainstream conservative and Republican response to the Iran deal. If you ask any other Republican candidate or top-flight conservative pundit, they’d probably tell you that the deal with Iran is worse than the 1938 Munich Pact, in which Great Britain and its allies ceded portions of Czechoslovakia to Nazi Germany in order to prevent war. An invocation of the Munich Pact is no less a reference to the Holocaust than what Huckabee said – the immediate consequence of the Munich agreement was thousands of Czech Jews being rounded up by the SS and shipped to concentration camps. Referencing Munich 1938 is the more polite way to condemn a nuclear weapons pact by connecting it to the 20th century’s most horrific campaign of mass murder. Huckabee’s getting headlines because he put a bit more edge on his Godwinning of the Iran debate than we’re used to seeing.

There’s also the question of why Huckabee is behaving in this fashion. The generally agreed upon assumption is that he’s joining the rest of the second- and third-tier candidates in trying to steal a little media attention away from Donald Trump. Rand Paul chainsawed through the tax code, Lindsey Graham destroyed his cell phone, and Mike Huckabee grimly invoked genocide. And it’s probably true that Huckabee is trying to break through the Trump-dominated noise, but I’m pretty sure he’d say the exact same thing if Donald Trump weren’t a candidate.

The entire Huckabee campaign to date has been one crazy, attention-grabbing stunt and statement after the other. Before he appropriated the Holocaust to criticize the Iran deal, Huckabee borrowed Lyndon Johnson’s “Daisy” ad to try and shock and scandalize us with the threat of nuclear annihilation. When the Supreme Court issued its ruling striking down gay marriage bans as unconstitutional, Huckabee questioned the authority of the court (“the Supreme Court is not the supreme being”), said he would defy the court’s decision as president, and likened the ruling to the Dred Scott case in calling for civil disobedience. On transgender rights, he said he wished could have faked being transgender in high school so that he could shower in the girls’ locker room. When all of polite society was recoiling from the Duggar family over allegations of sexual abuse and cover ups, Huckabee rallied to the Duggars’ defense and said they were victims of the media.

This has been Huckabee’s shtick for a long time – he’s a cable news pundit who is running for president. He’s been trying all along to run the sort of campaign that Trump is running, only Trump is actually succeeding at drawing media attention to himself and improving his standing in the polls. Huckabee has officially been in the 2016 race for nearly three months, and his national poll numbers have been dropping precipitously since early June. In Iowa, where Huckabee won a surprisingly lopsided caucus victory in 2008, his numbers have been in steady decline. And, as was the case in 2008, Huckabee’s fundraising has lagged behind nearly every major Republican candidate.

Huckabee’s chief currency is outrage, and he’s burning through it quickly. Once you bring the Holocaust into the mix, there aren’t many more places one can go to shock the sensibilities of the reporters and pundits for whom he’s putting on this performance. And while he has the misfortune of being matched against Trump, the master of the effortless media circus, this routine wasn’t doing Huckabee much good before Trump entered the race. When President Obama called Huckabee’s Holocaust remarks “ridiculous” and “sad,” he was aptly describing a candidate who wastes a lot of energy just trying to get people angry at him.