My fifth-grade teacher slut-shamed me 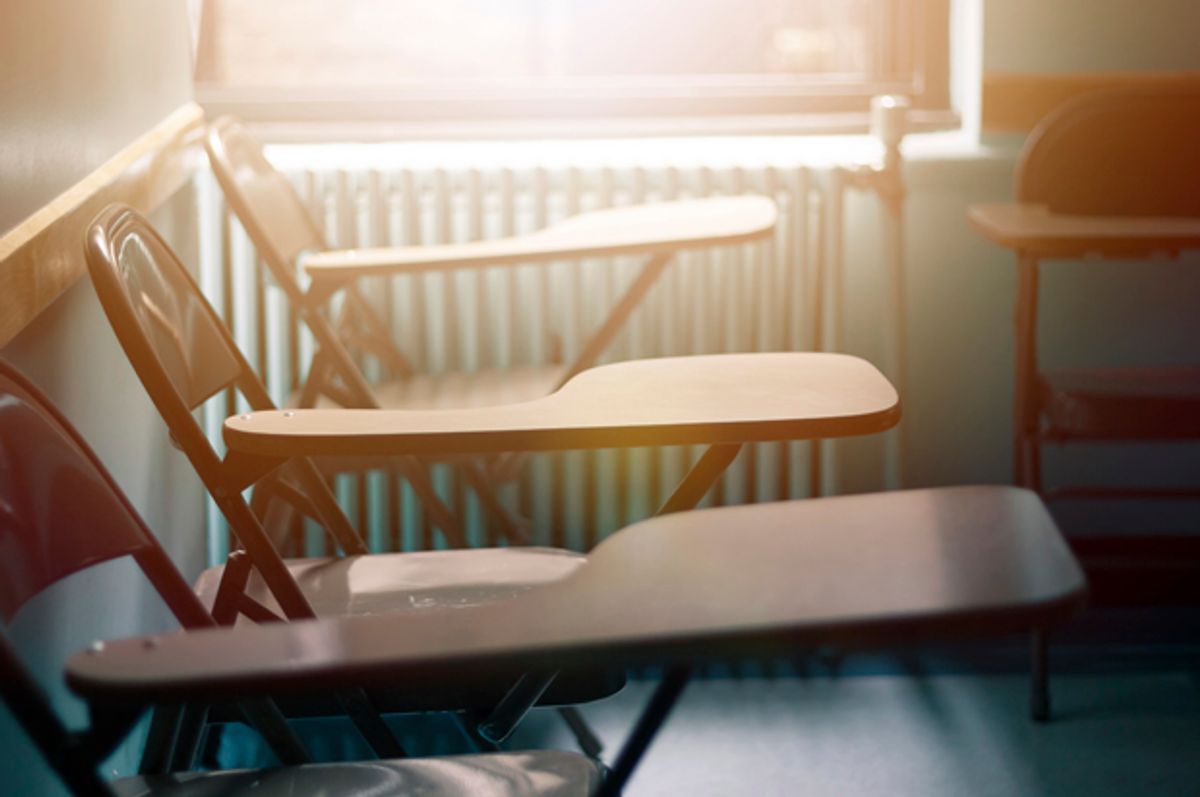 Slut-shaming is a phenomenon that has touched women of all kinds and has become a powerful force of discrimination in our society. We asked women who have experienced it firsthand to share their stories in hopes that it will inspire you reconsider the way you view other's sex lives—and your own.

The timing was horribly convenient: The week immediately following my first menstrual period happened to coincide with my new school's uncreatively named Puberty Program, during which the fifth-grade class was corralled into the school’s multipurpose room so we could sit on the floor and be enlightened about all the magical changes happening to our bodies. But my body seemed to be the only one in the fifth grade that was currently experiencing any of those changes. I looked around at the popular girls, the ones who managed to look flouncy and delicate while beating the boys at soccer during recess. They sat with skinny, tanned legs stretched out in front of them, their flowered sundresses flat against their chests, looking bored.

Watching them, I felt like a whale. Not a graceful, peaceful whale darting through the ocean and waving friendly hellos to ferry boats, but an awkward, exposed whale stranded on the beach and disgusting everyone with its smell as it rots to death.

We spent the first part of the afternoon watching presentations by bumbling, sweaty gym teachers who had not signed up for this. They just wanted to be blowing their whistles at the red, humiliated faces of chubby kids dangling helplessly from the chin-up bar. Instead, they had to spend the afternoon pronouncing sticky words like “vulva” and “testicle” at the red, humiliated faces of pubescent kids trapped in the room with them.

Next was a question-and-answer period in which we could anonymously write down our most embarrassing concerns on index cards to be read aloud in front of the entire grade and answered by whichever unlucky gym teacher had drawn the short straw that afternoon.

But I wasn’t listening. The maxi pad I’d pilfered from my mom’s bathroom closet that morning hadn’t lasted as long as I’d expected, and the wadded up toilet paper I’d crammed between my legs in a bathroom stall as a stop-gap measure had now, to my horror, dislodged itself. I shifted around on the floor, beginning to panic as my makeshift sanitary napkin slid backward in my underwear, inching toward the waistband of my shorts. To find a position that would best prevent its migration, I tried sitting cross-legged, then tried copying the reclined position of the seemingly unfazed girls around me, finally settling on tucking my knees beneath me so I was rather uncomfortably kneeling on my heels and clasping my hands in my lap.

I looked up just as the gym teacher, Mrs. Abbott, pulled an index card out of the stack, cleared her throat apprehensively, and read aloud: “When is it OK to have se…x?” She had realized the meaning of the question halfway through the last word, and she immediately looked as if she regretted not substituting something less terrifying for that final “x,” something like “…ven cats.” “When is it OK to have seven cats?,” she would have asked, and all the fifth graders staring her down would have chuckled—Never! It is never OK to have seven cats, silly!—and she could go back to inventing creative new permutations of Wiffle ball.

I wondered vaguely who had written that question. But I didn’t dare look around the room for a hint among the faces of my classmates, in case that slight motion would somehow cause the toilet paper in my underwear to shift again. My feet, trapped between my enormous whale butt and the linoleum floor, were starting to lose feeling inside their Adidas Samba sneakers.

As I stared straight ahead, I began to sense the creeping, peripheral heat of suspicious glares and knowing smiles. The air around me became stagnant, saturated with curiosity and accusation. A voice near my right shoulder whispered, “Emily.” Then another, brassier voice said loudly, “That must have been Emily's question. Right, Emily?” I didn't move. It was too hot. My feet began to ache dully.

More from The Daily Dot: White woman called out for Facebook lie about being attacked by black men at Walmart

Mrs. Abbott smirked and cleared her throat for about the thousandth time that afternoon. Then she said, “Well, let me answer Em​... er... the question.” Before the last syllable escaped her lips, the room erupted in laughter. I felt its pressure pounding against my ears, threatening to crush my skull. A line of sweat lost its grip on the elastic band of my sports bra and plummeted down my stomach into my lap.

Mrs. Abbott met my eyes. My classmates watched her as she spoke directly to me: “It’s not OK to have sex because you feel like it or because you want to. Sex is a gift for your husband or wife. Think of it this way: If you have a fancy piece of jewelry and you give it to one person, then give it to someone else, then to someone else, nobody is going to want it anymore. It will be used, maybe with some scratches on it, because it's been worn out by so many people. Who is going to want it then?”

I tried to imagine a scenario in which a fancy piece of jewelry would find itself re-gifted to so many different people. The fanciest jewelry I knew about was a necklace that had belonged to my mother, but it had been stolen by the suspicious characters who had helped us move into our new house​ in this terrible new town​. (At least that’s what my mother suspected, and she was usually right about people’s character. Maybe the movers had sold it to a pawn shop, where it would be sold to someone else who could give it as a gift. By that time, it might have some scratches on it like the jewelry in Mrs. Abbott’s story, I supposed.)

Suddenly, I pictured Mrs. Abbott having sex with a faceless man, wearing nothing but my mother’s dinged-up, pawn-shop necklace and looking ashamed about ​the whole thing. Embarrassed, I broke eye contact with her and looked down at my sweaty, clasped hands.

The male gym teacher had chosen the next index card. Amazingly, he hadn’t learned from his colleague’s mistake. He, too, neglected to look over the written question before reading it aloud: ​​“What if you puncture one of your nuts?”

The room was filled with gasps and nervous chuckles, and I was no longer the center of attention. Once again, I was just an anonymous whale.

Almost two decades later, I discovered my middle school diaries, which I had begun keeping just months after that awful Puberty Program. Reading the words I had written so long ago, I once again became that girl who believed she was a disgusting embarrassment because she had been labeled the school “slut.” I relived the experiences that had robbed her of her self-esteem. And I decided to share them with the world in my upcoming book, UnSlut: A Diary and a Memoir.

More from The Daily Dot: 5 reasons George W. Bush is still one of the worst presidents ever

Beyond sharing my own story, I started the UnSlut Project to amplify the voices of women all over the world who have survived slut-shaming in various ways throughout their lives. Through sharing these experiences, the project reaches girls who need to know they are not alone and that they, too, can overcome sexual bullying. I like to imagine that in multipurpose rooms in schools all around the world, anonymous whales are transforming into confident, hopeful, powerful young women.