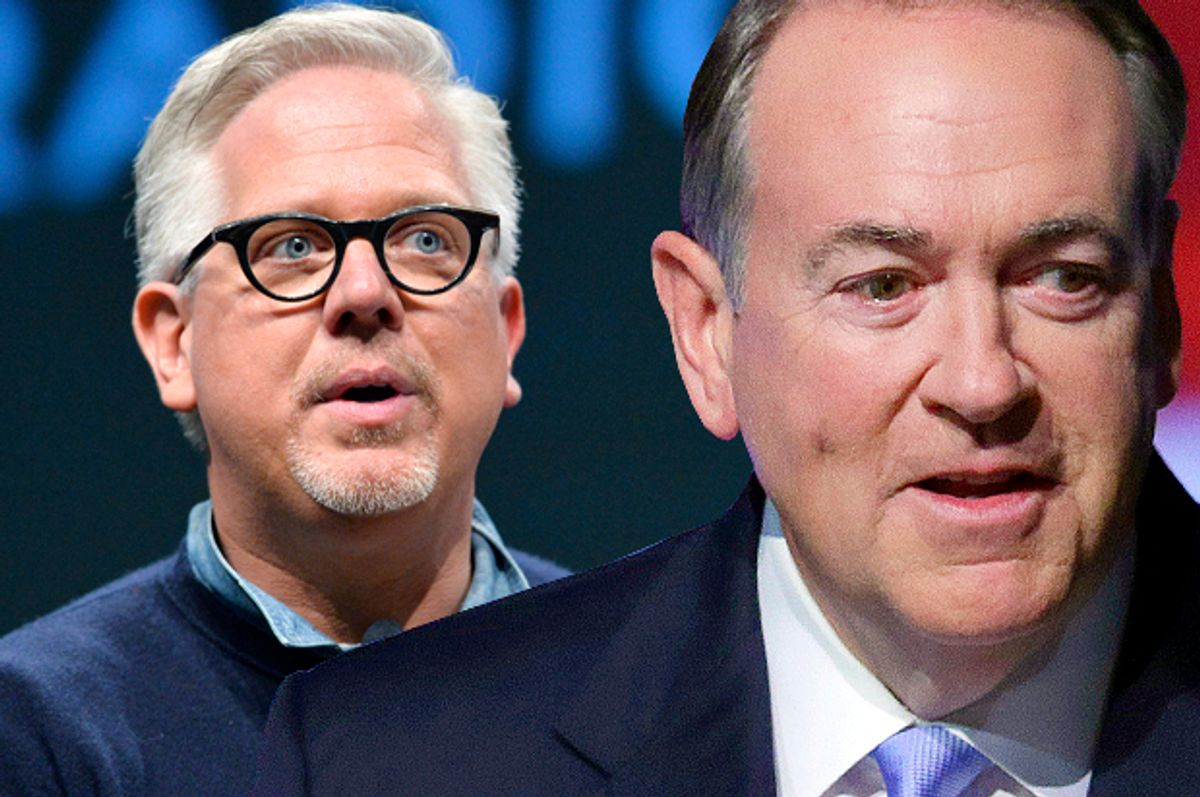 Last month, after some speculation, it was announced that the longtime chief and architect of Fox News, Roger Ailes, had re-signed with the company for a multi-year contract, and would be jointly reporting to Rupert Murdoch and his sons, Lachlan and James. It has previously been reported that the Murdoch sons are not fans of the right-wing network, which led to some hope on the left that they would, after taking over, come in and sweep the floors. Unfortunately, it seems Ailes will be promoting misinformation and fear for years to come, which is not too surprising -- it would be naive to expect a complete reorganization at a company that has been so profitable for the corporation.

Indeed, there is a lot of profit to be made in the business of right-wing media, which is full of money-making charlatans preying on the ignorance of their followers. For every big-time right-wing media star in America, there seems to be untold amounts of merchandise that goes along with it. Whether it's Bill O’Reilly, with his annual ghostwritten “Killing” books, or Glenn Beck, who has his own clothing company and online store, selling everything from $750 quilts to $195 knives, being a conservative talking head seems to give one the ability to print money. In fact, the further right you go, the more it begins to resemble outright quackery. Whether it's useless and overpriced products or just plain scamming, dedicated conservatives seem to be particularly susceptible to political commodification. The following list looks at some of the most outrageous products and scams that are promoted to the conservative audience.

Alex Jones, the man who worked up all the loonies about the Jade Helm conspiracy sells enough supplements to open up his own GNC. Things like “Patriot Blend 100 percent Organic Coffee,” “Vacuum Sealed EnerFood” (in case something should go terribly wrong), water filters that remove 90 percent of fluoride, and of course, “Survival Shield X-2 - Nascent Iodine,” which, among other benefits, can protect one from radiation exposure.

“Super male vitality,” which retails at an affordable $89.97, has been used by Alex Jones himself “to maximize vitality when working up to 12 hours a day or more in the fight for freedom.” In fact, this product works so well for Jones, that, in his words, “I actually had to stop taking it before I go on air or else I would want to do hours and hours of overdrive with complete focus on the topics at hand.” And then, of course, there’s the $24.95 book, “The Case Against Fluoride,” which, well, you know.

Jones doesn’t just sell quack supplements. At his store, there is also a wide array of survival products, just in case a nuclear holocaust or totalitarian takeover occurs. These include up to one year food supply ($1,795), survival coffee (25 year shelf life), emergency radios, and the RAD Survival Straw ($54.95), which removes 99.99 percent of radiological contaminants in the water.

It shouldn’t come as a surprise that the granddaddy of modern conspiracy theories, which generally attract paranoid individuals, would open up a store selling overpriced supplements and products for every imagined danger. Out of all the right-wingers cashing in on their fear-mongering, Jones is the most reminiscent of a snake-oil salesman. Like the surveillance industry, Jones spreads fear, and then profits off of it. His 2 million viewers eat it up.

Everyone knows that Super PACs are shady and full of dark money from corporations and billionaires, but if it happens to be a conservative, Tea Party-associated Super PAC, there’s a good chance its just plain fraudulent. POLITICO reported earlier this year that during the 2014 campaign cycle, 33 PACs that “court(ed) small donors with tea party-oriented email and direct-mail appeals” raised $43 million (74 percent from small donors), but only spent $3 million on ads and contributions, compared to $39.5 million on operating expenses.

This seems to point to one great scam movement targeting the fear and credulity of conservatives, many of whom are probably old and un-savvy in the digital age. These fringe PACs usually jump on certain scandals (real or otherwise), like Benghazi, or send out anti-establishment messages, like “Stop Jeb Bush,” to get dedicated conservatives to open up their wallets. On Red State, Erick Erickson writes:

“I think more and more older conservatives are getting scammed by con men living well off other people’s money. I doubt very much that much, if any, of the money is going to support these causes...It is a terrible blight on the conservative movement and on the tea party in particular that the hucksters have come up to cash in.”

Glenn Beck, the former Fox News host, has done quite well for himself since leaving the network -- starting the successful media company, The Blaze, while continuing his nationally syndicated radio show. He is now reportedly worth around $250 million, and makes some extra cash from his own clothing line, 1791 Supply & Co. Denim, which he started “to be a beacon of light, to be a company that believes that all people are capable of being the best versions of themselves.” Beck also claims that he was inspired after seeing a Levi’s ad that was promoting a “European Socialist” message. Compared to the 1791 commercial, with a bearded grizzly man in Alaska building his very own rocket (aimed at Russia?) and Glenn Beck providing his best rugged American voiceover, the Levis ad does seem rather European. Beck reads:

“These were the first American blue jeans, the jeans that built America, and they were built in America. Built in a time when things were timeless, when you knew things would last. A time when people worked for their dreams, and their dreams worked for them. Americans built locomotives and put a man on the moon. Well, maybe you’ll never get your chance to go to the moon. But as an American, you can sure as heck still shoot for it!”

For such a rugged working-class message, it’s hard to imagine someone like the man in his commercial buying a $190 pair of jeans, which is what they go for.

But Beck doesn’t just sell jeans. He also sells everything from camping tents to grooming products, like the “Papa Wolf Beard Oil,” (his very own snake oil) “made with only the finest ingredients to revitalize your skin & tame that wild mane, keeping you dapper until the next sunrise.” Beck’s store sells soap, knives, leather conditioner, boot oil, bush smart fire bullets, a $645 “ranger tent,” and a $165 “leather camp stool.” Beck has commodified patriotism, masculinity, and nostalgia, just as Jones commodified fear and paranoia.

“You are supposed to read the disclosure and the disclaimer that is a part of the messages. You know, we are simply the conduit to send messages, these are sponsored and I can't always vouch for the veracity.”

So said Presidential hopeful Mike Huckabee to Media Matters, after being asked about how he rents out his email list to scammers, among them the medical quack Dr. Russell Blaylock, who promotes pseudo-science cures and preventative strategies for “Alzheimer's, dementia, Parkinson's, and other neurodegenerative disorders.”

Once again it seems that right-wing scams are preying on the elderly. Blaylock has previously appeared on Alex Jones’ Info Wars, exposing Obama’s so-called “Nazi Healthcare System,” and has also been promoted by Newsmax, Dick Morris, Herman Cain, and Scott Brown.

Promotional scamming is nothing new for the conservative movement. Back in 2012, Goldline, a Glenn Beck promoted company, was ordered to pay $4.5 million to defrauded customers, after it had been found to be essentially a scam that misled customers into buying overpriced gold coins. Lately, conservative media outlets have been promoting shady investments, like marijuana stocks.

The American conservative movement seems to be more about making money than influencing society. But is it really surprising that a movement which embraces fear, nationalism, and credulity is full of con-artists? The conservative extremist is a perfect candidate for being ripped off, with all of his or her distraught emotions being commodified. Whether it be paranoia of the government or nostalgia for classic American culture, when someone is full of such emotional zeal, it is easy to open up their wallets, and what better place for it to happen than the consumption crazed United States of America.