Bill Cosby and the power of #TheEmptyChair: "It would be hard to be the same person after reading that many rape accounts"

In the wake of the powerful NY Magazine cover image of Cosby's accusers, women share their own stories 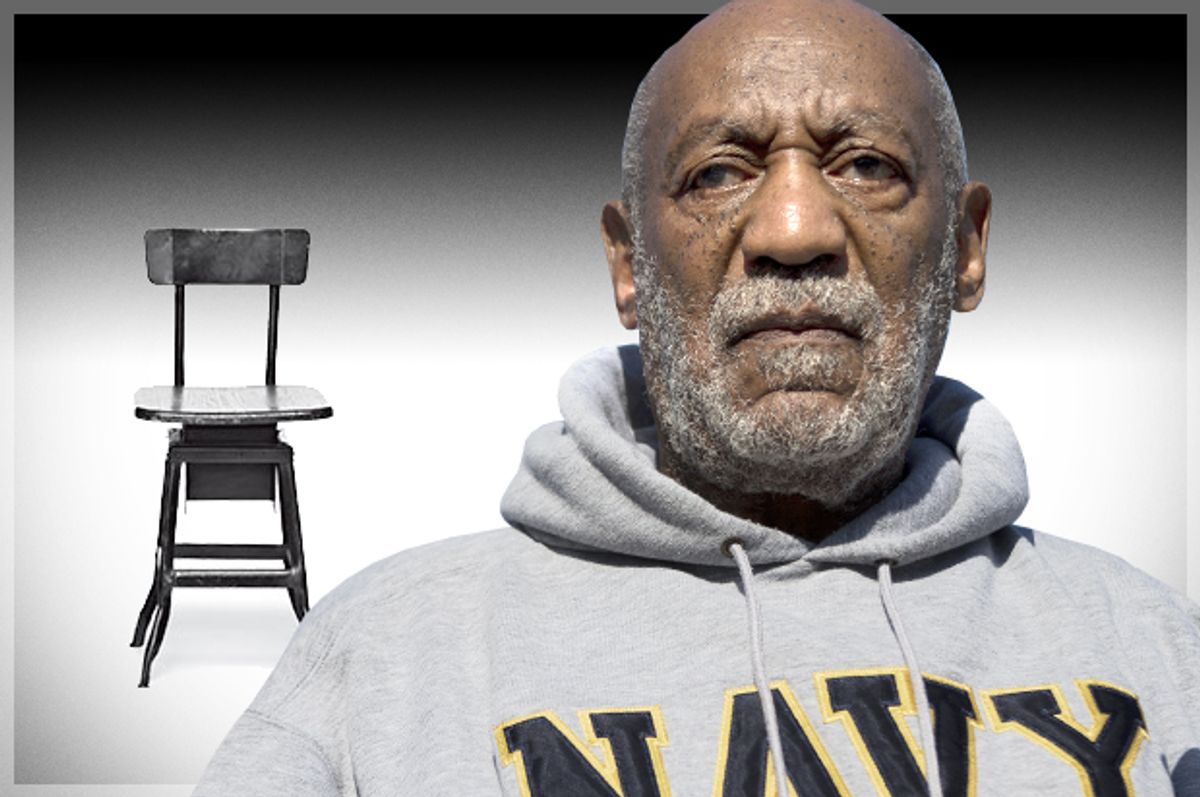 The scandal of Bill Cosby's alleged drugging and raping of dozens of women continues to unfold. The New York magazine cover depicting 35 women -- all accusing Cosby of sexually assaulting them -- also includes one quietly eloquent image: An empty chair. That icon has provoked a conversation on social media, where writer and radio host Elon James White is spreading the word about the widespread nature of sexual violence by tweeting the messages he receives from abused women. (Find the posts on Twitter under #TheEmptyChair.)

We spoke to White about the power of the image, the horrors of rape, and the best way to get troubling news out. This interview has been slightly edited for clarity.

That entire New York magazine cover is powerful, but the empty chair has been the most resonant image for a lot of people. Why do you think that resonated so hard?

We're dealing with the fact that so many women don't come forward. Even in the situation with Cosby -- that cover had 35 of the 46 women who placed accusations. So that chair represented almost a dozen women -- not to mention the number of women who have not come forward. And then the various reasons people who don't report their assault, because we're a society that blames the victim, that asks them why they got raped instead of trying to figure out who raped them.

Do we have even a ballpark guess at how large that proportion is -- what percentage of women don't report sexual assault or rape?

The Rape, Incest and Abuse National Network has some statistics about this -- they say 68 percent of assaults are not reported to police, and 98 percent of rapists will never spend a day in jail.

What made you want to spread the word on social media?

This is a conversation that's been taking place for quite some time. Black women, feminists, especially, have been having this conversation online at "I believe you you/ it's not your fault" -- publishing stories about this for a while. We've been covering this on my radio show for quite some time. When the [magazine] cover hit, it seemed like the time to address this issue again, especially since the media would pick up on the cover, being able to put people's stories out there, and allow them to have a voice. A lot of times people are afraid to speak out, they're afraid of being demonized -- they've got a lot to lose. So being able to give people space to speak without being attacked -- it just seemed like the right thing to do?

How many messages from assault victims have you received so far and which has been the most disturbing or memorable?

I don't know how many messages I've gotten -- a couple hundred at this point. I've posted something around 120 and 130 and I still have some to go through. I can't point to one specific one and say, "This is particularly powerful," or whatever. At this point I've read over 120 accounts of rape in various ways -- it's all horrifying. And the fact that we're not having this conversation: It basically took 35 women, making these allegations against Cosby, before we would finally listen. And even then, it took the media basically giving a shit about it before they started looking into this.

Have you been surprised by anything, learned anything, from getting all these messages, putting them online, seeing people's responses...?

I didn't think this many people would send them, and I didn't realize that people would trust me to create some sort of safe space like that. It's a lot. And there are still more to go. It started out on Twitter, now I'm getting messages on email and Facebook people are asking me to share.

Black men have been accused of rape in this country -- in many cases falsely -- for centuries. Were you skeptical of the charges -- did it ever seem like just another case of a black man being accused of a crime?

I don't think race has anything to do with the accusations against Cosby. I understand the historical context of rape accusations. But we have stats on this -- we know that for the most part, women do not lie about rape. And whether he's a black man or not, the fact is the conversation needs to happen. Black women suffer violence, I think, more than any other group of women. Black, white -- it doesn't matter, it's about violence toward sexual assault victims, and we need to deal with that.

It's hard not to read what you're posting and not be horrified. But what do you hope this directs us to do? What are your hopes regarding this catastrophe you're documenting.

Well number one, I hope we will learn to believe women. They are obviously not the only victims of sexual assault. But they often talk about how no one believed them. They'll be told, "I don't believe you, I know him and he's a good guy..."

I'm hoping people are shocked into the reality that these [people] are not making this up. These accounts are anonymous -- these people are not trying to get money, not trying to ruin someone specifically -- they're just sharing their own truth. I'm already seeing people say, "I didn't realize it was this bad." The only reason you didn't know is because you weren't listening. So many people have been doing this work -- there's a whole website dedicated to this. People really need to stop and listen and learn.