Hell freezes over in Washington: Believe it or not, Mitch McConnell is right about something! 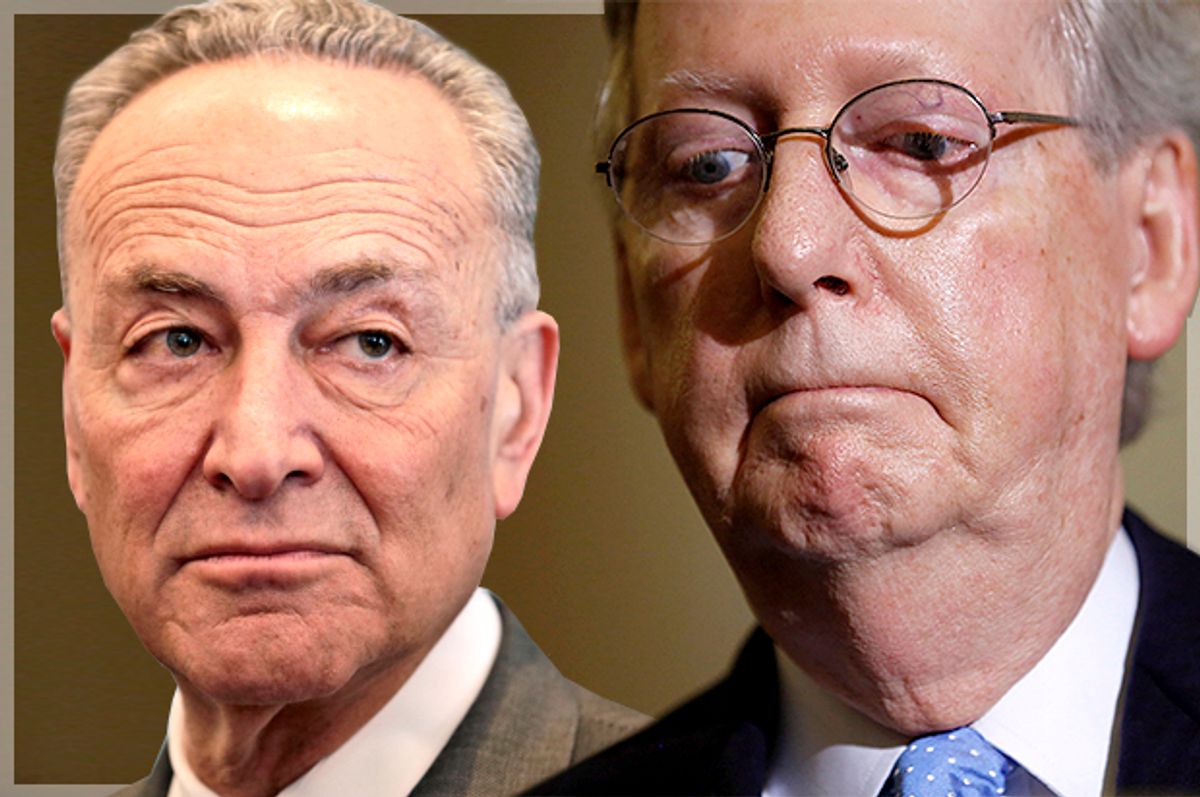 Both Democrats and Republicans want to pass a bill before this week’s deadline that extends and replenishes the highway trust fund, which helps pay for state infrastructure projects for roads, bridges and (to a lesser extent) mass transit. But Republicans in the House and Senate have very different conceptions of that bill. While normally this would be an opportunity for liberals to munch popcorn as they enjoy the intra-party theatrics on the right, there’s absolutely a preferred path here, one that takes a big subsidy away from Wall Street while protecting against a corporate tax giveaway around the Christmas holidays.

The House has already passed a short-term highway bill that funds continuing operations for only five months. This would be the 35th short-term bill, incredibly, since 2009. House leaders maintain that they want to pass a longer-term measure, but need time to complete their work at the end of the year.

Of particular interest should be the timing. This patch would last until December 18, the last day of Congress before the Christmas break, also known as the time when Congress slips things into law while everyone is off holiday shopping and trimming the tree. And there’s a plan for what to do with a long-term highway bill too: fund it through a corporate tax amnesty, allowing multinationals to bring home their foreign earnings with a minimal tax hit, well below the normal 35 percent range. Future Democratic leader in the Senate Chuck Schumer and Republican Rob Portman have already teamed up on this, using the enticement of infrastructure funds to alter the way the corporate tax system works.

Under the Schumer-Portman framework, the U.S. would no longer tax profits earned overseas when they are “repatriated,” instead assessing a low tax rate on all foreign corporate profits, regardless of repatriation. Since the U.S. rebates taxes paid to the host country where profits are earned, this means that U.S. companies would by and large pay no taxes on foreign profits at all. This is a zombie idea that keeps returning, driven by corporations wanting to lighten their tax burden and shift it over to the public. If you’re going to do something like this, it makes sense to sneak it in during Christmas season.

But Senate Majority Leader Mitch McConnell doesn’t want to risk a short-term bill. He would rather pass highway funding that extends beyond the Obama presidency, taking his chances on a potential Republican ally in the White House and a better deal in the future. This puts McConnell at odds with Paul Ryan and those who want to use the highway bill as a pretext to ratchet corporate taxes lower. The White House, incidentally, has supported the five-month stopgap.

After weeks of bargaining with Barbara Boxer, the ranking Democrat on the Transportation Committee, McConnell came out with a bill that pays for infrastructure for three years through a $47 billion grab-bag of funds. Some of the pay-fors are silly; for example, selling off oil in the Strategic Petroleum Reserve to pay to fix potholes at a time when oil prices are at multi-year lows is just bad business. And really, funding for roads should be paid for with a user fee to travel on those roads, with the first increase in the gas tax since 1993.

But there are some good items in the McConnell-Boxer bill. In fact, one-third of the cost is offset by finally limiting an egregious subsidy to big banks that has existed for over 100 years: Nearly 3,000 banks get a 6 percent dividend on “stock” they hold through participation in the Federal Reserve system, tax-free in the majority of cases. It’s literally free money, an entitlement program that has flowed to banks at a very generous rate, initially to entice them into the system. But nationally chartered banks must purchase stock and join the system, so there’s no reason for such a high dividend (no matter what substitute bank lobbyist and Fed Chair Janet Yellen claims), which automatically pays for the stock outlay several-fold over time.

McConnell-Boxer, taking the offset from the Progressive Caucus’ budget, would reduce the 6 percent dividend to 1.5 percent, saving over $16 billion. If highway users won’t pay for these projects, getting rid of useless bank subsidies is the next-best thing. Plus, a longer-term bill limits the opportunity for Chuck Schumer, Paul Ryan and the Obama Administration to save corporations hundreds of billions of dollars by relieving their tax burden.

House leaders in both parties have said they will not look at the Senate’s multi-year highway bill, which is poised for passage this week. Making matters even more complicated, the Senate attached a reauthorization of the Export-Import Bank, which conservatives allowed to expire because they consider it corporate welfare, an inversion from the days when Democrats made the same charge. The White House, which supports Ex-Im these days, insisted that its reauthorization accompany the highway bill. The question is now who will blink first, the House or the Senate, or whether they will let highway funding expire.

Neither version of the highway bill is a particularly good way to set policy. Another short-term extension makes state projects uncertain. Funding three years of a six-year bill is similarly haphazard. But as a choice between two imperfect options, the longer-term approach is clearly superior. It removes the possibility of a distasteful corporate tax “reform” bill in December. It finally kills the indefensible bank subsidy. And considering that the White House already wants to pay for infrastructure with a corporate tax amnesty, the threat of a worse deal under the next President doesn’t sound so bad.

Keeping up maintenance on roads and mass transit projects is the kind of feel-good policy that members of Congress love to tout in campaigns. Democrats may not want to see a long-term bill when they want to challenge Republicans for control of the chamber in next year’s elections. But faced with the choice of the McConnell option and a Chuck Schumer-backed scheme to give a tax handout to the largest corporations in America, I’ll take the McConnell option every time.