The BPD thanked them for their cooperation, but look at those cops -- what choice did people have? 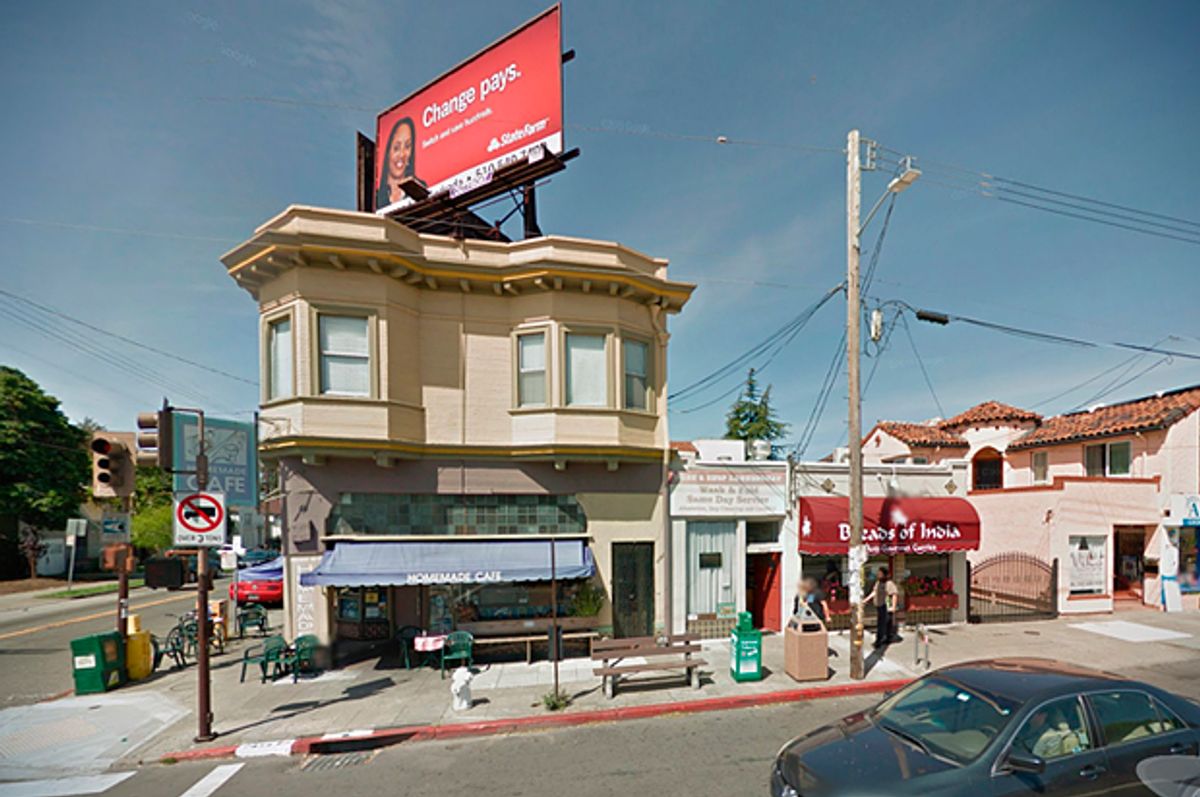 The Wash and Shop Laundromat (center).
--

Emilie Raguso's coverage of a police manhunt wasn't extraordinary because the of who the suspect was or what crime he committed -- a young black male with "silver teeth" who robbed a laundromat at gunpoint -- or because it ended in any particularly compelling fashion -- the police never found him -- it was extraordinary because of how casually Raguso reported what the accompanying images strongly suggested was a full-scale military invasion of a Berkeley, California neighborhood.

Everything conspiracy mongers mistakenly think is being done across seven southwestern states by highly trained special forces units in Operation Jade Helm 15 is, in fact, being done -- only it's being done by poorly trained police officers dressed up like soldiers in cities across America. The situation in Berkeley on Monday is merely emblematic.

Raguso's prose is measured, conveying the idea that nothing out of the ordinary was happening. The police statements she reproduced -- "We are currently searching the area for the suspect who may be in the block" -- are equally innocuous, suggesting that the situation is being professionally managed by a police force that deals with armed suspects like this one on a daily basis.

But the art accompanying that measured prose is something else entirely. Instead of the police cruisers and uniformed officers one would expect to see in photographs accompanying an article about a manhunt for a laundromat robber, readers are greeted with images of heavily armed soldiers emerging from military-grade armored vehicles.

The caption assures readers that these are, in fact, members of the Berkeley Police Department searching for a petty thief armed with a single handgun -- but that assurance isn't all that reassuring. What warranted this response? Berkeley Police spokeswoman Officer Jennifer Coats said "cash was taken during the robbery, but there were no injuries reported to the victim." Had Berkeleyside not chosen to include those photographs, the events of the day would have seemed so mundane as to barely warrant mention on the local news.

The story here isn't that the police have become militarized -- that's beyond dispute at this point -- nor is that a reporter elected to capture the events as they unfolded in a style designed to flatten affect. The story is that police using military-grade equipment can invade a neighborhood for hours on end and release a statement that describes the them as having "arrived on the scene and quickly established a perimeter."

That's technically true, but it's a technical truth deliberately designed to obscure the reality of what happened in Berkeley yesterday -- a way to convince the public that, in fact, nothing out of the ordinary happened at all.