It's tempting to narrate the awfulness of random people to a captive hashtag audience. Here's why we should resist 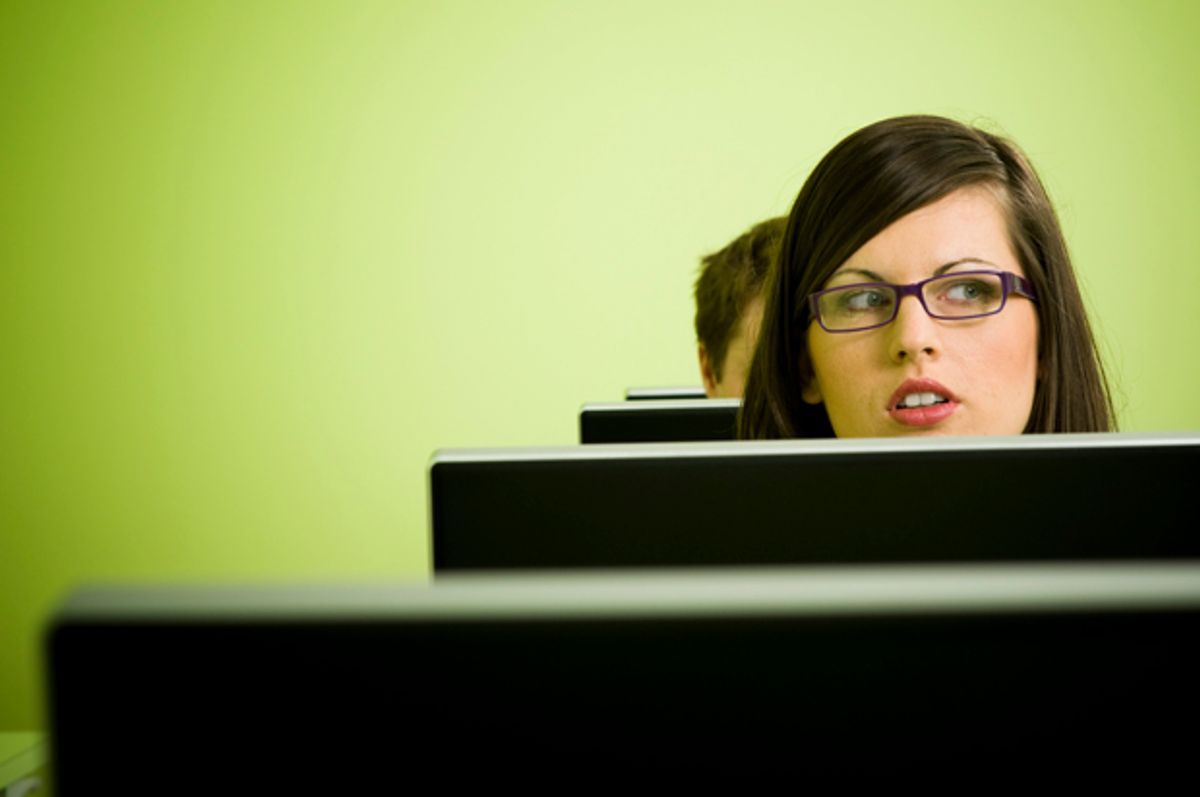 In case you were wondering whether Puritanism, nosiness and ruthlessness had gone out of fashion, this story, as reported by Metro UK on Friday, should let you know they are alive and well. As they put it:

[A] woman has been outed for apparently sexting another man while at a ball game with her husband.

The woman was outed by two Twitter users – sisters (and expert spies) Brynn and Delana Hinson – who were sitting behind the couple at an Atlanta Braves baseball game on Wednesday.

They claim the woman was sexting a man named Mark Allan, who was suspiciously saved in her phone under the name Nancy.

Why do we even know about this? Oh, because the “expert spies” posted about it on Twitter, where Brynn wrote the extremely classy, “When there’s a married couple in front of you but….hoes ain’t loyal so me & @lanabaybee8 expose em!”

As if that weren’t enough, they also made a video of the writing of the note they left for the husband telling him what his wife was up to, because they’re selfless like that.

If we accept at face value that this story played out exactly as the sisters say, I have a few questions: First off, who does that? Who thinks that what strangers do on their phones—yes, even in public—is their business, let alone worth butting into and exposing to the world? Why were the sisters interested enough to devote what looks like a fair amount of effort into documenting and sharing these texts, let alone inserting themselves into the story by passing on a note to the husband? Who was this woman supposed to be loyal to—her husband or you? Is “hoes” the correct plural spelling of “ho?” What were they trying to accomplish?

I strongly suspect the answer to the latter had far more to do with their desire for online attention than anything happening in front of them in the stands.

I asked Sherry Amatenstein, LCSW, a New York City-based therapist and author of "The Complete Marriage Counselor," for her take. She told me:

"This incident happened at the same time the movie '37,' about the Kitty Genovese tragedy, is being filmed. In that instance neighbors allegedly overheard their neighbor in the wee hours of the night being brutally attacked, then killed, and stayed safe behind their windows. The world would be a lovelier place if we helped others in trouble," Amatenstein said.

"This ballpark incident is the opposite: it's about gossip and ‘fun' and making yourself a 'heroine' on social media and nothing about caring about this husband. [This] is not something to take pictures of and blast out into the cyber-ether. This woman was not the morality police. It's none of her business.”

Exactly. Amatenstein also drew a link between this supposed “exposé” and Gawker’s outing of a married male executive’s attempts to buy sex from a male escort, saying, “Just because we can doesn't mean we should.”

That seems obvious, yet in both cases, putting private citizens under scrutiny in the name of breaking a story was given higher importance than basic empathy. I’d venture what the sisters did was even worse; Gawker at least could make the claim (though I’d disagree) that this is the journalism they’ve been doing for years; it’s familiar territory and it’s what readers expect from them.

The Hinsons have none of that going for them. They seem to have cooked up an elaborate scheme to shame this couple without knowing anything more than what they saw during a few minutes of texting. Would they want the contents of their phones exposed to the masses? I’m guessing not, especially considering that Brynn’s Instagram account is a private one.

Male sex blogger Exhibit A wrote a recent post about his own history with cheating, specifically of being the guy women use to cheat on their partners and musing on the Ashley Madison hacking. He, like, I would venture, most people who’ve experienced cheating, doesn’t find it as simple as calling women “hoes.” He wrote:

Without doubt, there are terrible, dishonest people who use sites like Ashley Madison to betray their partners – but to view every single user in cold, judgemental [sic] black-and-white is to ignore the reality that stares us in the face. All of us have either cheated or known someone who has. All of us have lied to a partner at one time or another. Even if it didn’t involve sex, all of us have done something to betray a partner’s trust.

Blanket condemnation achieves nothing. The more we try to paint infidelity with broad, monochrome strokes, the more we reduce our chances of understanding the individual choices that people make. Maybe most of those will still appear bad and selfish, but there will be others that many of us can understand – can even empathise with – if we open ourselves up to that.

I realize I run the risk with this piece of getting a reputation as the writer who always rushes in to stick up for adulterers, by empathizing with cheaters or expressing my support for “the other woman.” I’m willing to risk that, because I’m not arguing for cheating; I’m arguing against what’s become a form of slut-shaming as blood sport, with the exposers fancying themselves Good Samaritans telling the world that behind closed doors, not all marriages are as perfect and monogamous as they may look from the outside. You’re not doing a social good by “helpfully” writing a note to a man to say his wife is cheating, or broadcasting that in real time online—even if the man really did appreciate the tip, as Brynn told Metro UK. That’s not the point; if we agree that Gawker was wrong to out a private person, we can’t then pile on and applaud these women’s actions.

I’m also not saying that if this happened in front of me at a public venue I wouldn’t have looked. I’m nosy, I love gossip and I’m a naturally curious person. But if I had seen this woman sexting, I would hope what I’d have done is whisper furiously to the person next to me and try to read the couple’s body language. I’d have wondered how long the affair had been going on, if the husband suspected, what the other man thought about his role. Yes, I’d have cared, and maybe been drawn into the juiciness of strangers’ lives, but I think I can safely say I would not have had the impulse to become a sexist social media vigilante.

Yes, it’s sexist to call a woman a ho, to presume you know what she should be doing with her personal life when you’ve literally never seen her before and will likely never cross paths with her again. It’s disgustingly opportunistic to gleefully write a note to the husband, setting off what could be the end of a marriage, all in the name of Twitter likes and supportive comments from people who use hashtags like #exposethehoes.

Metro UK summed up its article on the Hinsons’ exploits with the pithy sendoff, “The perils of the social media age, eh?” So let’s talk about that for a minute. I wholeheartedly believe that what these sisters did is far worse than what this wife could possibly have done, even if she’s cheating on her husband with dozens of guys. Why? Because that’s an issue for them to sort out as a couple; what the Hinsons did was take something they observed that had nothing to do with them, post it online and act like they were doing a public service that deserved accolades and fame.

Yes, we do live in the age of social media where an incident like this is possible, but if I ran a company, I would never hire the likes of anyone who’d boasted about what the Hinsons have. They took sensitive, deeply personal and potentially damaging information and for no apparent reason, save a prank or perhaps a dire need for media attention, turned it into an international story.

It’s not social media that’s causing people like the Hinsons to think they deserve heroine status for being nosy, spiteful and invasive; social media is just a tool they’ve used to do so. What I hope they realize is that they’ve just made a permanent Google record for themselves, and it’s not a pretty one—oh yeah, and that other people’s intimate relationships are still personal, even if they’re sexting at a baseball game. If you think they deserve praise for this noxious stunt, you’ve probably never sent a text or email you wouldn’t want the whole world to read—right?