"You can't rape your spouse": Trump counsel's "inarticulate comment" is a hallmark of rape culture 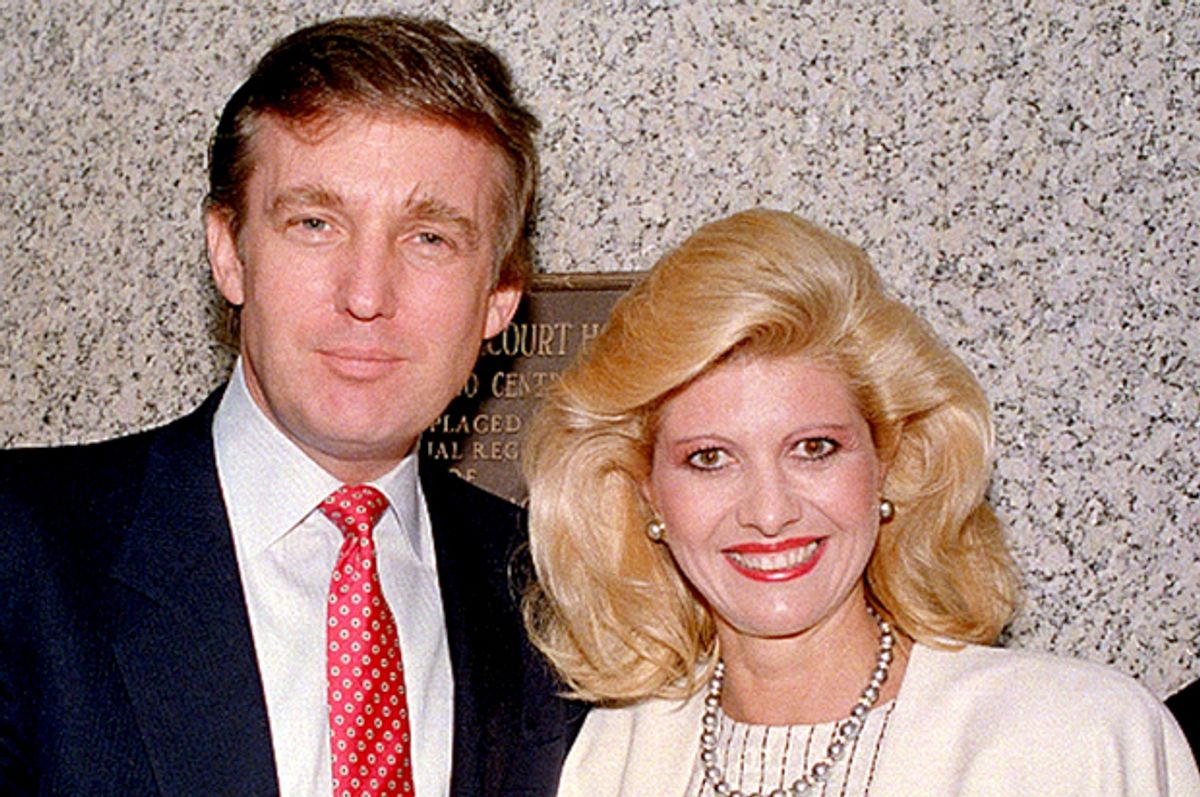 This whole rape thing is so confusing. Like, if you drug and sodomize a 13 year-old child, maybe it's rape, but is it, as Whoopi Goldberg once famously asked, rape-rape? If a rape results in pregnancy, is it no longer a "legitimate" rape? If you're accused of drugging and sexually assaulting dozens of women over the course of five decades, is that really more important than your show business legacy? And similarly, if you're married, are all bets are off, or what?

In a disturbing Daily Beast story Monday, writers Tim Mak and Brandy Zadrozny took a look back at an incident from reality show veteran and full time Twitter troll Donald Trump's marriage to ex-wife Ivana Trump. As the writers noted, in the 1993 biography "Lost Tycoon: The Many Lives of Donald J. Trump," author Harry Hurt III described a "violent assault" that allegedly took place after Trump had surgery to remove a bald spot. Hurt wrote of an angry confrontation between the spouses and then said, "He jams his penis inside her for the first time in more than sixteen months. Ivana is terrified… According to versions she repeats to some of her closest confidantes, 'He raped me.'" Later, "As she looks in horror at the ripped-out hair scattered all over the bed, he glares at her and asks with menacing casualness: 'Does it hurt?'"

Back in 1993, Trump — who earlier this month wondered aloud "Who's doing all the raping?" — vehemently denied the incident, calling the book the work of "a vindictive and jealous person." And when the book was published, Trump's team obtained a statement from Ivana, which appeared on the first page of the book. In it she stated that "During a deposition given by me in connection with my matrimonial case, I stated that my husband had raped me. [O]n one occasion during 1989, Mr. Trump and I had marital relations in which he behaved very differently toward me than he had during our marriage. As a woman, I felt violated, as the love and tenderness, which he normally exhibited towards me, was absent. I referred to this as a 'rape,' but I do not want my words to be interpreted in a literal or criminal sense." The New York Times reported when the couple divorced in 1990, "Cruel and inhuman treatment by Mr. Trump was cited as the grounds for the uncontested divorce." In a statement Tuesday, the former Mrs. Trump said, "The story is totally without merit."

Whatever your thoughts on the varying accounts of what happened 26 years ago, what's especially relevant about the Daily Beast story is how those events are being framed right now. It's how the special counsel at The Trump Organization, Michael Cohen, tried to put it all in context just this week. "You’re talking about the frontrunner for the GOP, presidential candidate, as well as a private individual who never raped anybody. And, of course, understand that by the very definition, you can’t rape your spouse," he explained. "It is true. You cannot rape your spouse. And there’s very clear case law." He also added, "I will make sure that you and I meet one day while we’re in the courthouse. And I will take you for every penny you still don’t have. And I will come after your Daily Beast and everybody else that you possibly know. So I’m warning you, tread very f__king lightly, because what I’m going to do to you is going to be fucking disgusting. You understand me?"

But look, here's a New York Times story on "New laws recognizing marital rape as a crime," noting in particular where the law stands in Mr. Trump's own Empire State: "The state's highest court threw out a provision of state law that barred prosecutions in marital rapes." The story is from 1984. And guess what? Since 1993, marital rape has been criminalized in all fifty states.

I don't know how much a special counsel to an organization is supposed to know about the law. But Trump's people certainly attempted to distance themselves from Cohen's remarks Monday evening, saying, "Nobody speaks for Mr. Trump, but Mr. Trump." And I do think it's great that somebody over there at Trump HQ finally got the memo that you can rape your spouse and that that is in fact "very clear."

In a statement to CNN Tuesday, Cohen walked back his remarks, saying, "As an attorney, husband and father there are many injustices that offend me but nothing more than charges of rape or racism. They hit me at my core. Rarely am I surprised by the press, but the gall of this particular reporter to make such a reprehensible and false allegation against Mr. Trump truly stunned me. In my moment of shock and anger, I made an inarticulate comment -- which I do not believe -- and which I apologize for entirely." He actually made it twice but who's counting?

The laws around rape — and not just marital rape — continue to evolve on a state by state basis. We have a deeper understanding now of intimate partner sexual assault and abuse, and rape no longer has to fit a narrow definition of a single and specific man-on-woman act. But the basic gist is the same — spouses are entitled to consent, and a violation of consent is a crime. So here's a tip for those within the Trump circle — and beyond — for going forward: If you want to say it didn't happen, that's totally fair enough. If you want to say that it couldn't have happened because they were married, you might want to read a law journal or a even newspaper first, preferably one written in the last thirty years.