Donald Trump's spirit animal is Tony Soprano: How he built a campaign full of "Goodfellas" wannabes

A "special adviser" to the Donald said some horrifying things about rape recently. This is completely unsurprising 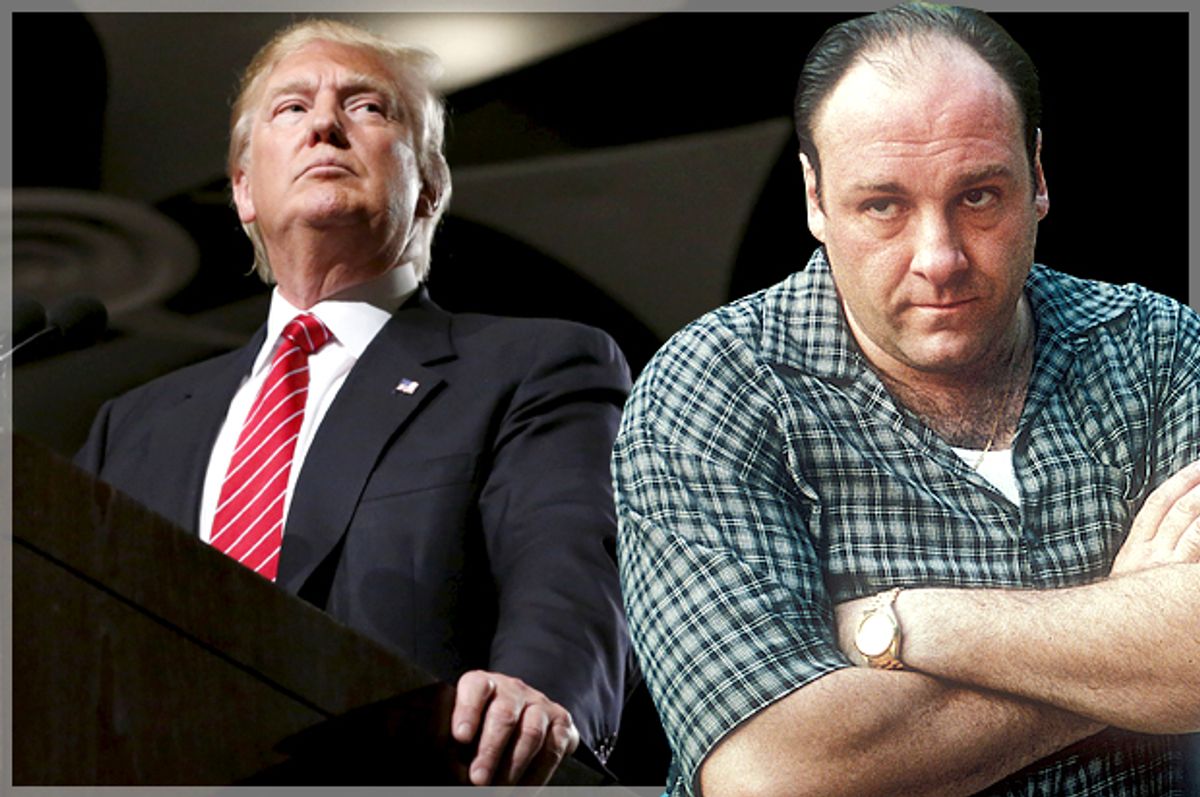 It's hard to believe that only a couple of weeks ago everyone assumed that Donald Trump was finished for saying that John McCain wasn't a war hero. The glee with which the Republican poobahs declared him dead was palpable, and the blithe assumption that one of the beltway media's favorites, John McCain, was unassailable on his war record was universal. They were, of course, all wrong. Donald Trump can say anything and get away with it, at least as far as 25 percent of the GOP base is concerned. And remember this: That 25 percent adds up to millions of Americans.

Many of us pointed out the contrast between the uproar over Trump's McCain insults and the more muted response to his degrading comments about Mexicans, but in the end it didn't add up to much. Trump's numbers continued to rise. We don't know if they will rise again on the revelations that his former wife once accused him of rape during their contentious divorce nearly 30 years ago; but the media, at least, has decided that nobody will care about that since his wife issued a statement at the time saying that she didn't mean it.

Even still, you have to wonder whether the comments his "special counsel" and spokesman Michael Cohen made this week might be something that finally forces Trump on the defensive. Here's a sample of what he said to a Daily Beast reporter when asked for comment about the charges aired in Trumps divorce back in 1991:

Threatening reporters will likely not hurt Trump. People like that. In fact, they cheer it on both sides of the aisle. Neither is it likely that the "special counsel's" erroneous assertion that marital rape is not illegal hurt Trump. The sad fact is that marital rape wasn't illegal in many states until quite recently. As Irin Carmon wrote in this piece for MSNBC, many right wingers still maintain that it shouldn't be. This quote from O.G. movement leader Phyllis Schlafly best exemplifies the rationale:

“I think that when you get married you have consented to sex. That’s what marriage is all about, I don’t know if maybe these girls missed sex ed... When it gets down to calling it rape though, it isn’t rape, it’s a he said-she said where it’s just too easy to lie about it … Feminists, if they get tired of a husband or if they want to fight over child custody, they can make an accusation of marital rape and they want that to be there, available to them."

I thought Schlafly was against all Sex Ed, but apparently she thinks it's fine as long as it teaches women that saying "I do" on their wedding day is the last time she'll ever be asked if she wants to have sex.

Schlafly's comments track with another Republican, a state Senator, who shared a bit of wisdom from his daddy, who told him that he should be careful because if he gets a girl pregnant she'll claim she was raped. He charmingly elaborated on the idea by saying, "some girls, they rape so easy." So basically, in the view of these conservatives, all women, married or not, commonly lie about being raped. And this is used to excuse their heartless insistence, of fairly recent vintage, that a woman should be forced to give birth to her rapist's offspring.

So none of Cohen's comments are likely to hurt the Donald with his fans. Even if they think Ivana Trump was telling the truth in her original deposition, they would tend to think she had no right to deny him his marital prerogatives. This is why they like Trump -- he takes what he wants.

Trump’s key lieutenants tend to fit the same consumer profile as his discount luxury-brand targets: They are men with middle- and working-class roots; lacking in elite credentials; mesmerized by made-for-TV displays of lavish wealth. They are impressed with brashness and bored by subtlety. They are amused by dirty jokes and averse to irony. They are likely to buy a Trump-branded necktie sometime this year, and if they feel like splurging they’ll get the matching cufflinks, too.

This isn’t a caricature I came up with; it is central to the ethos of Trump’s political operation. On the day after the 2012 election, one of Trump’s advisers described for me the billionaire’s appeal to blue-collar voters: “If you have no education, and you work with your hands, you like him. It’s like, ‘Wow, if I was rich, that’s how I would live!’ The girls, the cars, the fancy suits. His ostentatiousness is appealing to them.” That may be crass, but it didn’t strike me as elitist: Trump’s political advisers see themselves as descendants of this same tribe.

That description is very reminiscent of another tribe with which one might be familiar if you watched "The Sopranos." The swagger, the ostentatious show of wealth -- and the threats.

But if you recall Henry Hill's narration in "Goodfellas," you might also see the rather ugly subtext to that up-from-the-working class identification:

"To us, those goody-good people who worked shitty jobs for bum paychecks and took the subway to work every day, and worried about their bills, were dead. I mean they were suckers. They had no balls. If we wanted something we just took it. If anyone complained twice they got hit so bad, believe me, they never complained again..."

That's what Donald Trump's candidacy really promises. Goodfellas only look out for themselves.

If Trump remains at the top of the field for much longer, it's hard to imagine that his "special counsel's" style of speaking won't end up spurring some people to take a closer look at Trump's business dealings over the years. This piece by David Kay Johnston in the National Memo raises some very interesting questions along those lines. But I wouldn't expect the real dirt in these matters to come from an enterprising journalist's shoe-leather reporting. This is the kind of thing at which GOP oppo-research teams excel. If Trump takes a tumble in the polls because of information along these lines, he shouldn't threaten the media company that revealed it. It was most likely fed to them by one of his rivals, perhaps even this guy.