Jon Stewart's secret White House visits: When access looks too cozy, integrity and independence are on the line 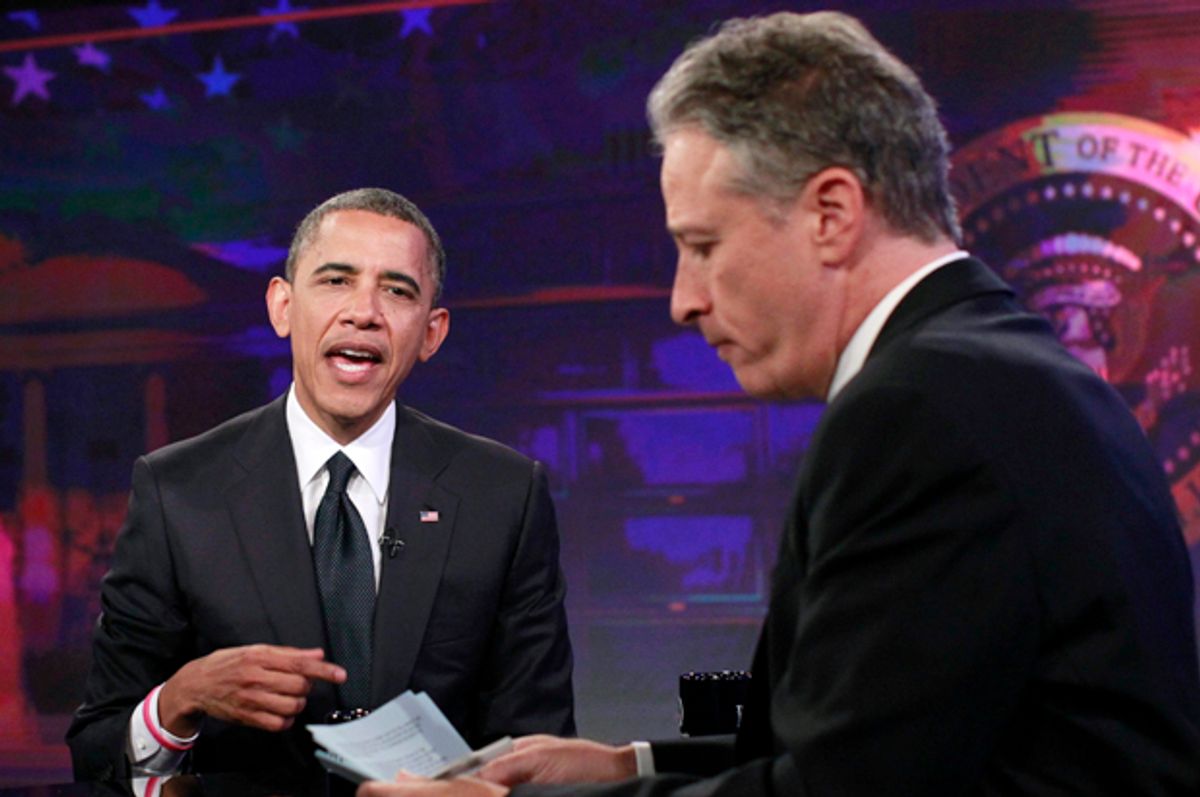 Jon Stewart is funny. Jon Stewart is cool. Jon Stewart, it's hard to deny, has even been that rarest of things: A newscaster/pundit who has been a good influence on a president and the nation's politics. A new Politico story documents some of it:

The 52-year-old funnyman is widely credited with changing how the government treated military veterans and Sept. 11 first responders and for the cancellation of a hyperpartisan CNN talk show. His broadsides against President George W. Bush’s Iraq War and a series of Obama missteps had a searing effect on how Americans thought about Washington.

These weren't the only cases in which Stewart put an important issue on the nation's agenda, as Politico points out:

Last month, Stewart had another straight-to-the-camera moment, channeling his disgust over what he said would be a “we won’t do jack s—t” national response to the gun rampage in Charleston, South Carolina, that left nine African-Americans dead... Many credit Stewart with helping set the tone for the sweeping national debate about the appropriateness of flying the Confederate flag, and its eventual removal from the South Carolina state Capitol.

At a time when much of the the nation has frothed at the mouth over being led by a suspected homosexual Kenyan socialist, Stewart has directly engaged the lunacy of the far right and its media enablers. After numerous attempts for a lefty or liberal media presence to counter Rush Limbaugh and Fox News -- remember all the excitement about a progressive radio network? -- Stewart has put substantial left-of-center issues, many of them driven by simple common sense and humanity, at the center of the conversation. And he's done it without covering himself with the earnestness that's often the plight of lefty crusaders. (Sarcasm, apparently, helps.)

The Politico story, which chronicles his rise and importance, documents all of this quite well, and makes clear that centrists, moderate liberals, and dedicated progressives are likely to miss him when he steps down next week.

But the news that Stewart has been taking "secret" meetings at the White House has me a bit uneasy. The Politico story began with an anecdote that would have been charming in another context: "Jon Stewart slipped unnoticed into the White House in the midst of the October 2011 budget fight, summoned to an Oval Office coffee with President Barack Obama that he jokingly told his escort felt like being called into the principal’s office." And in February 2014, the White House summoned Stewart a few hours before the president stood up to Vladimir Putin over the mess in Ukraine.

For a journalist -- or whatever kind of 21st century hybrid Stewart is -- to have access to people in power is important. You need to keep those channels open. But secret visits at potentially triumphant moments? This sounds a bit like co-opting. And part of Stewart's currency is his independence and integrity.

After the news came out, Stewart went on Larry Wilmore's show and spent most of the time -- when he wasn't being teased about having already checked out -- talking about the White House trips. "I don’t know if they were secret," he said. "I’m in the visitor log. And they took pictures of the meeting." (He and Obama, Stewart says, spent their time eating nachos and watching the celebrated John Goodman film "King Ralph.")

Well, I'm still uncomfortable. Earlier journalists and television anchors had access to power in general and the White House in general, and the results were a mixed bag. It led them to keep a lot of things secret for the sake of continued access. The tradeoffs may -- or may not -- have been worth it for the nation as a whole. But a lot of us thought we were in a different era now. Especially with an ornery guy like Stewart. And since the rant-right considers "the liberal media" -- a nonsensical term, of course -- to be in bed with the evil state, this could echo in ways that makes both The White House and "The Daily Show" look bad.

Don't get me wrong -- I still love Jon Stewart and the way he's opened up the conversation. There's no previous television figure in recent decades who compares. But if he and Obama want to hang out -- and the recent interview shows how strong their rapport is -- I'll be more comfortable after both of them have gone back to being civilians.