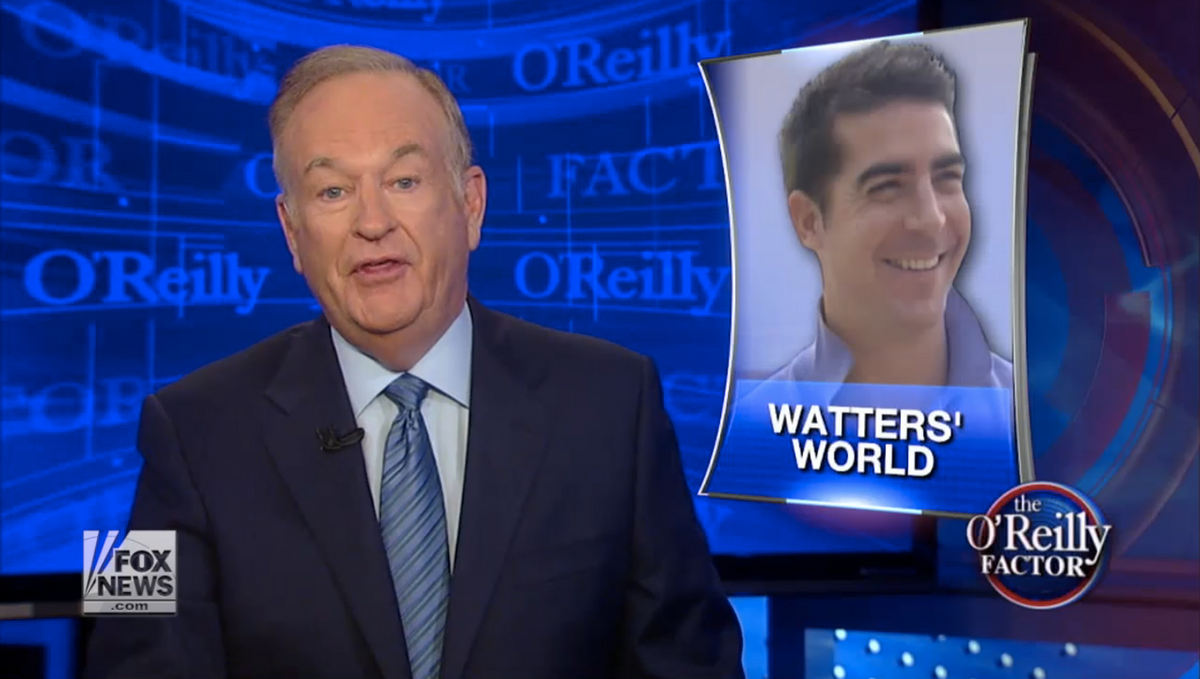 Finally, the heroes at "The O'Reilly Factor" are aggressively taking on a serious issue that affects us all on so many profound levels, it'll be difficult to know exactly which historical accomplishments ought to be mentioned during their presidential medal of freedom ceremony, sure to be forthcoming. And by "serious issue," I mean specifically a homeless man in New York City who urinated in the street. For this obvious and extreme trespass against decency -- nay, our American way of life itself -- Bill O'Reilly and his sidekick Jesse Watters decided that this man, who reportedly suffers from schizophrenia and is perhaps at the lowest point in his life, should be publicly shamed, exposed and ridiculed on an episode of the highest-rated cable news show on television.

But let's back up for a minute and give a full-reckoning of what is, all snarking aside, just the latest example of "The O'Reilly Factor's" longstanding and contemptible treatment of homeless Americans. To wit: Earlier this month, "Factor" producer Jesse Watters launched a campaign to go around shaming homeless people in Manhattan, ambushing a handful of them inside Penn Station on camera. Watters condescendingly badgered a half-dozen or so of them with questions about whether it was legal to sleep inside the train station -- because, again, this is an issue of significant national importance, requiring that people who fight to survive, and barely do, every minute of every day be harassed by smarmy cable-news frat boy.

In his new segment, Watters began by interviewing various New Yorkers about what he considers to be a desperately urgent public safety issue: people, you know, making pee-pee. After hyping the fear and concerns of the citizenry, and likely leaving anyone who disagrees with him on the cutting room floor, Watters sought out the man himself.

In the video we see Watters approaching the man who was camped out on the sidewalk. As soon as he sees Watters and his camera crew (two cameras), the man awkwardly stands up and walks away as Watters asks in his now-familiar haughty tone of voice, "Are you the guy that was relieving himself in the city?" Watters, who's now employing tenacity better suited downtown and in the faces of Wall Street villains who are systematically raping our economy, holds up The Post cover and asks, "Is this you?" And as the homeless man approaches the camera to block the lens with his hand, prompting Watters to scold, "It looks -- sir, don't touch the camera. Don't touch the camera." Then more scolding from Watters, "You're not allow to do this," meaning, you're not allowed to piss in the street.
At this point, the segment cuts away to several more concerned citizens who, it seems, don't have an off position on their outrage switch because one guy micturating on Broadway is worthy of deep, deep concern.
And... scene.

Next, Watters, in studio, has the nerve to complain to O'Reilly that the "street urinator" should've been institutionalized. Sure, great idea. Now where's the Republican support for spending more money on providing mental health services for the poor and homeless? Maybe Watters should do another segment and aim his snotty, grade-school hall monitor attitude at GOP politicians who routinely gut spending on social services.

From there, Watters and O'Reilly engage in a sort of asinine support group, criticizing "the far-left progressive crew" for calling them on their previous inhumane field report at Penn Station. O'Reilly says, "[The left wants] Calcutta on the Hudson."

Yes, that's exactly what "the far-left progressive crew" wants: Third world poverty in the United States. That's exactly right, which is why the left supports affordable health care, a living wage, a robust middle class, regulations against businesses who exploit workers and ship jobs overseas. social justice and equality for all -- and, while we're at it, how about a Republican Party that cares as much about people after they're born as they do before they're born. I'm not sure how these ideas translate to "Calcutta on the Hudson," especially coming from a pair of wealthy conservative white guys who never met a social spending bill they didn't demonize. If O'Reilly doesn't want Calcutta on the Hudson, why not use his sizable audience to push for legislation that will provide a path out of homelessness, out of poverty, while abandoning the tired right-wing trope about boot-straps.

But he won't do that. Indeed, O'Reilly and Watters will absolutely continue to air these kinds of pitiless attack segments in which they invariably punch downward instead of up. Why? Because O'Reilly's mostly white, middle-aged, conservative audience is just that cruel. These self-proclaimed Christians and disciples of Jesus; these fetishists of family and moral values believe it's just delightful to stalk and harass on worldwide television poor people who have nothing in this life other than the rags on their backs.

Again, there are men and women in expensive suits and very serious haircuts right now, at this moment in lower Manhattan, doing damage to the world that far exceeds by all means and measures a poor son of a bitch who, in one of the worst moments of his life, pissed on Broadway. The fact that Watters, O'Reilly and their dedicated fanboys don't recognize this important distinction illustrates what's so badly broken about Fox News Channel and, in a broader sense, modern conservatism.