From James Bond to Edward Snowden: How the dangerous fantasies of spy fiction shaped our "Mission: Impossible" world

If the Cold War innocence of 007 has turned dark, the effects are the same: Espionage is cooler than democracy 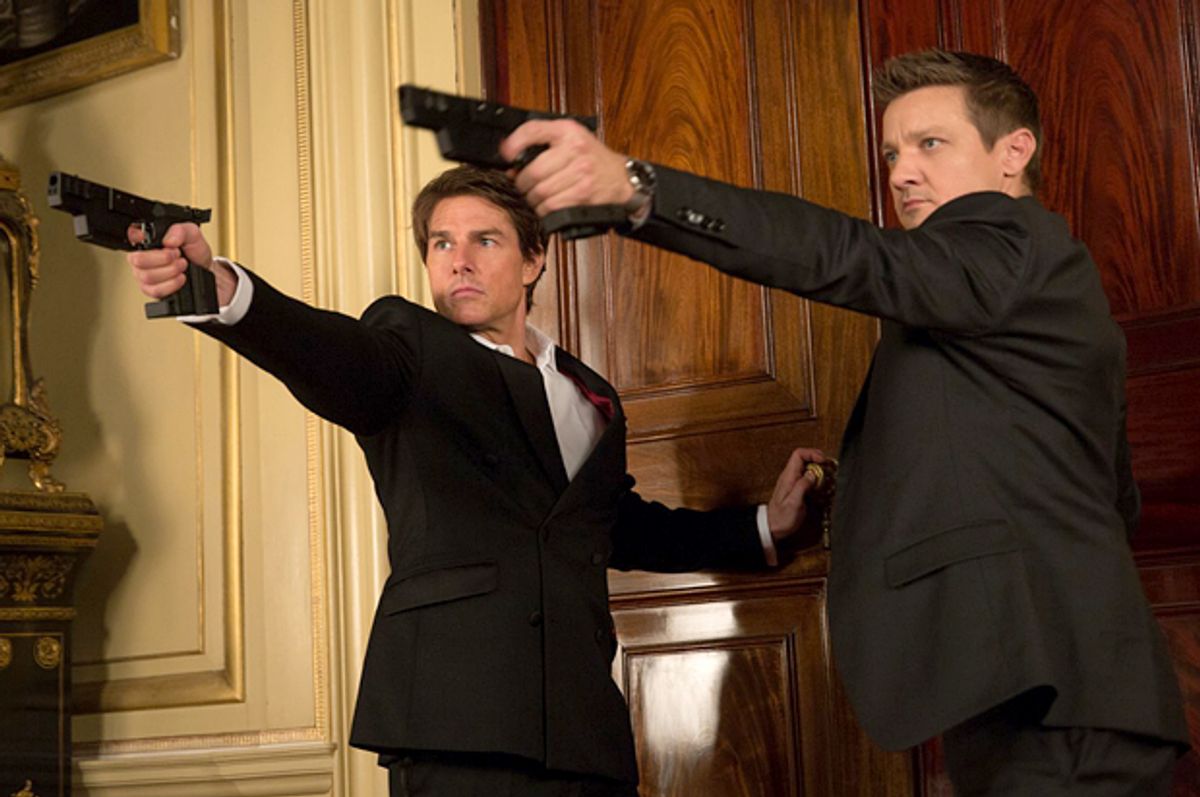 What do we know about the secret world of espionage and intelligence, and how do we know it? The story that connects James Bond and Edward Snowden, fiction and reality, thrilling romance and profound cynicism or disillusionment, has been told over many years and in many ways. I’ve been thinking about this since seeing the new Tom Cruise movie “Mission: Impossible – Rogue Nation,” but this really isn’t a movie review and I wouldn’t argue that this capably crafted thriller from writer and director Christopher McQuarrie (who also directed Cruise in “Jack Reacher”) breaks any new ground or represents the ultimate distillation of anything. It’s a diverting ride, played out against spectacular locations, that repackages a whole bunch of familiar elements and attitudes: A little latter-day Bond, a little Jason Bourne, a little John le Carré, a little 1950s Hitchcock.

What strikes me on a larger scale is the way that the “Mission: Impossible” franchise and many other fictional properties have served as gradual ideological conditioning, acclimating us to the rise of the national or global security apparatus. I don’t exactly mean that the whole universe of espionage fiction is a sinister concoction designed to brainwash the public – although, in the case of the fictional Agent 007 and his semi-fictional creator, former British intelligence agent Ian Fleming, that unquestionably played a role. (Allen Dulles, who headed the CIA under Dwight Eisenhower, was a huge fan of Fleming’s books, and reportedly tried to get the agency’s technicians to produce real-world versions of the famous Bond gizmos. They never worked.) It would be more accurate to say that spy fiction reflects a genuine moral confusion about the role of secret agents in modern society, but has generally succeeded only in worsening that confusion.

A film like “Rogue Nation” simultaneously congratulates us for our clear-eyed skepticism about government and our loss of faith in institutions while insisting on primal movie myths about the incorruptible individual and the noble band of brothers. We may no longer feel quite sure about America or democracy or capitalism or morality or any such grand abstractions, but somewhere out there amid all the lies and chaos, Tom Cruise and other unstoppable and immortal heroes are doing the right thing – even if we have no idea what that might be.

Even the movie’s subtitle provides an epistemological clue to this puzzle, if only through its total vagueness and meaninglessness. OK, yes, spoiler alert: But the “rogue nation” in this movie is not Iran or Russia or any other recognized nation-state with borders and generals. (It certainly isn’t China, since this movie was partly made with Chinese production funding, the not-so-secret channel of money that is not-so-subtly transforming Hollywood.) In fact, I can’t quite tell you what the term means in McQuarrie’s fictional universe. Maybe it refers to a sinister shadow version of the recognized intelligence agencies that is working to destabilize the world, in the old-school vein of Hydra and SMERSH. But as we know both from fiction and the real world, the boundaries between those things are none too clear and it can become difficult for intelligence operatives to tell which side of the looking-glass they’re on.

At various points in “Rogue Nation,” both Ethan Hunt, the intrepid American renegade played by Cruise, and his mysterious nemesis, a bespectacled weirdo in a depressingly stereotypical vein played by English actor Sean Harris, are described in the kind of inflated metaphysical terms usually reserved for Olympian gods or alien supercomputers. The CIA director played by Alec Baldwin tells the British prime minister that Hunt is a “force of destiny” who has foreseen all possibilities and cannot be outwitted, and Hunt in turn sees Harris’ nefarious madman, who is always a step ahead of him, in exactly the same way. Of course the movie’s plot cannot sustain this pseudo-profundity and demands a winner and a loser, but along the way we are repeatedly told that there is no objective standard to distinguish good from evil, light from dark, heroism from terrorism. The rogue nation is literally everywhere.

On a certain level that might be defensible as a portrait of moral or political reality, but its effect is to disempower the public and suggest that democracy is pointless. As in every other movie of this kind, the elected officials who supposedly oversee intelligence in the new “Mission: Impossible” installment are posturing, bloviating morons who exist to be duped. Politicians cannot hope to control the spies, and not just because the former are hopelessly lame and the latter unbelievably awesome. Or rather, that dynamic of awesome vs. lame reflects a deeper truth, that intelligence and espionage agencies cannot be controlled because they are inherently uncontrollable, like volcanoes and hurricanes. If we have been confronted with evidence of their mendacity over and over again, and the Cold War innocence of the Fleming novels and early Bond films is lost forever, we have not lost faith in their ultimate coolness.

There’s an essential contradiction here, reflected in the inevitable and ridiculous scene when Hunt or Bourne or the Daniel Craig-era James Bond discovers that his pantywaist desk-jockey superiors have betrayed him and he’s all alone under triple-deep cover, hunted as an enemy of the state. Why does the guy always act like this is a surprise? Hasn’t he seen any of the earlier movies? To trace the roots of this contradiction and its ideological effects would require writing several dissertations and acquiring a great deal of forbidden knowledge. I’ve written previously about the investigations led by Sen. Frank Church in the 1970s, and our collective decision to forget about all of it later. But right now I’m tempted to point the finger back at 1958, the year Fleming published “Dr. No” (which became the basis for the first Bond film four years later).

That book came out in the spring, just as the vast archipelago nation of Indonesia was thrown into chaos by a military rebellion of unclear origins and uncertain goals. It was apparently aimed either to overthrow the elected government of President Sukarno or to establish a breakaway republic on the island of Sumatra. Sukarno had inconveniently declined to align himself with either the Soviet or American side in the Cold War, and was consistently depicted in the American media as either a Communist dupe or an open sympathizer. As Time magazine pronounced, the rebels simply hoped “to shock the self-intoxicated president into a state of sober reason.”

Even after Sukarno’s forces announced the seizure of a huge shipment of rebel arms that had just been unloaded from an unmarked plane, Indonesia did not directly accuse the United States of funding and supplying the uprising. Sukarno and his ministers certainly did not mention the Central Intelligence Agency, a relatively new and secretive government body that was rarely named in the press. Nonetheless there were those who drew scurrilous inferences from the Indonesian government’s hints, and those had to be addressed. Secretary of State John Foster Dulles assured the public that the U.S. was “not intervening in the internal affairs of this country. President Eisenhower went even further at a news conference, telling reporters that American policy was one of “careful neutrality and proper deportment,” and that Indonesia’s internal conflict was “none of our business.”

“It is unfortunate,” lamented the New York Times in a May 9 editorial, “that high officials of the Indonesian Government have given further circulation to the false report that the United States Government was sanctioning aid to Indonesia’s rebels … The United States is not ready … to step in to help overthrow a constituted government. Those are the hard facts.”

Ha, as we say these days. The “hard facts” turned out to be somewhat different. Exactly nine days later, a U.S. Air Force veteran named Allen Pope was shot down over Indonesia at the controls of a B-26 bomber. Unfortunately for his superiors, Pope had disobeyed CIA protocol and was carrying all kinds of incriminating documents, including an ID linking him to the CIA’s private airline and records of his previous bombing runs. Allen Dulles was pretty much the sole instigator and funder of the Indonesian rebellion, an ill-fated scheme drawn up with his sourpuss big brother, the secretary of state. The Dulles boys had lied about the whole thing repeatedly and insistently, and persuaded Eisenhower, the beloved World War II hero turned ailing and inattentive president, to do likewise.

The Indonesia debacle wasn’t the first time during the Cold War that American officials had lied about a covert operation against a foreign elected leader, played the subservient “free press” like a Stradivarius and then had the temerity to turn around and talk about the evils of Communist propaganda. It certainly wouldn’t be the last. But it was among the most egregious and unavoidable examples, and also one that suggested that all our sanctimonious homilies about democracy and freedom of expression could not quite conceal a darker reality.

If the Dulles brothers came off as duplicitous schemers who didn’t mind starting a bloody conflict in the service of their grand and highly dubious global strategy, at least the episode didn’t make them look like total chumps. You can’t say that about the president of the United States or the entire Congress or the publisher of the nation’s most important newspaper. Spy fiction has not always depicted espionage favorably, and does not always do so now: The influence of John le Carré, the anti-Fleming, has been profound. But no matter what apparent ideology it adopts, it always offers us a version of that choice between coolness and chumpitude: Drink from the cup of evil and gain true knowledge, or be the bleating doofus who believes in democracy.