When even Bill O'Reilly isn't buying your attack on Planned Parenthood, you're in trouble 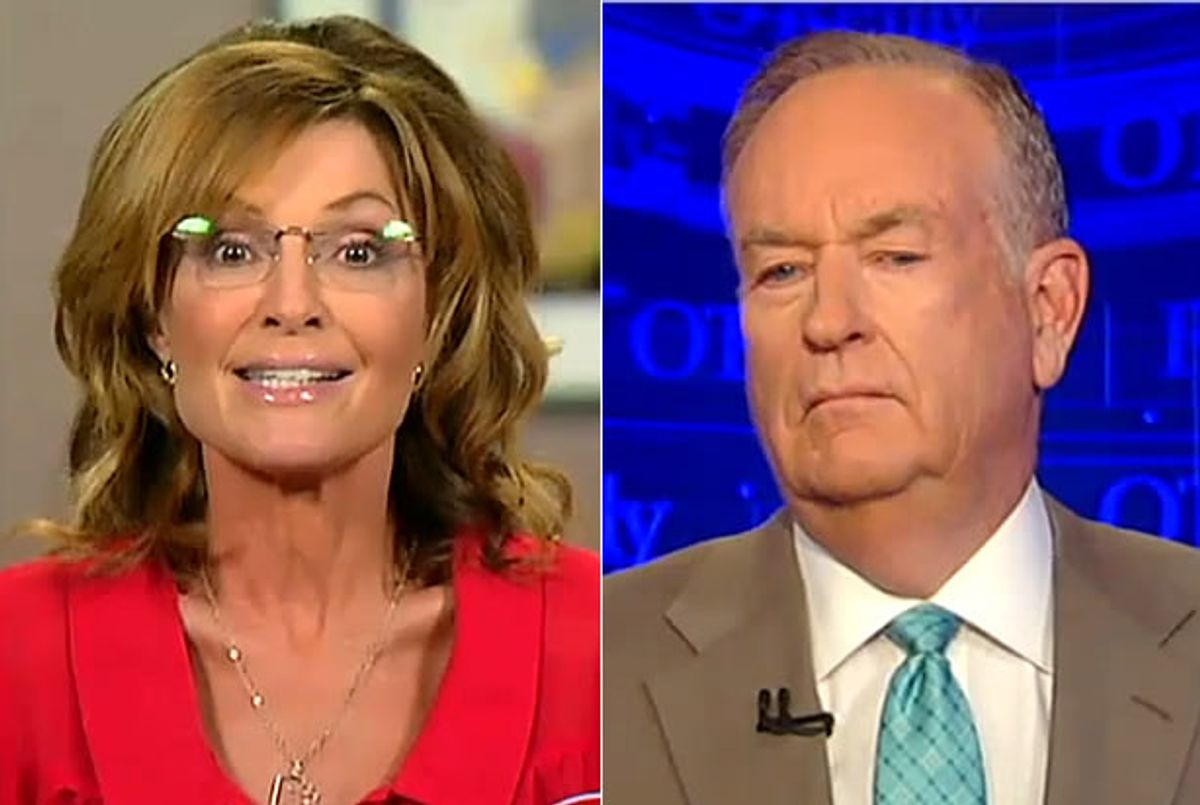 On Wednesday, former Alaska Governor Sarah Palin was peddling the lie that Planned Parenthood deliberately opens clinics in minority communities because its founder, Margaret Sanger, was part of a "racial cleansing eugenics movement" in the early part of the 20th century.

On her Facebook wall, she shared an excerpt from a Life Site News column she wrote in which she selectively quotes from Sanger's voluminous body of work the same three half-sentences that every pro-life advocate uses to back up the claim that "[s]he was a white supremacist in her beliefs."

That half of those half-sentences were actually written by W.E.B. Du Bois, the founder of the National Association for the Advancement of Colored People, is more than an ironic comment on the quality of her argument -- it actually undermines the entirety of it. She even admitted as much on Facebook, asking "Why does Planned Parenthood target minorities? Why are 80% of Planned Parenthood shops set up in minority neighborhoods?"

"Here is why," she answered, "Planned Parenthood's foundation is based on racism." If it isn't founded on racism -- and it isn't -- there must be some other reason that an organization dedicated to providing vital health care services to people who can't otherwise afford them appear most frequently in minority communities.

But as Palin isn't equipped to handle the idea that there's a deep structural connection between racial injustice and economic inequality in America, she had no choice to but go full-Godwin and claim that Margaret Sanger inspired Adolf Hitler to try and murder all the Jews.

At this point, it's worth noting that her attack on the racism inherent in Planned Parenthood also functioned as a defense of something else: On "The O'Reilly Factor," she discussed why she chose the Confederate battle flag as the symbol she would use to expose Planned Parenthood's racist origins -- at least, that was the plan. Her actual argument contained nothing of substance, she merely wanted to compare the outrage generated by the flag to the crickets that have accompanied the Planned Parenthood videos. O'Reilly noted that many conservatives are making similar comparisons with the lion story, and Palin agreed that all the attention being paid to Walter Palmer would be better served listening to her invent history out of half-truths.

After that pointless exercise in comparative outrage concluded, black America's greatest champion tried to convince her that poverty might play a role in the distribution of Planned Parenthood clinics, but Palin wouldn't hear of it.

She blustered that the organization "is devoted to finding targets who may be disadvantaged in some ways, but are made to believe that abortion is their only option. That is why 80 percent of Planned Parenthood 'shops' are set up in minority neighborhoods!"

"Why do you believe they're targeting minority women for abortions?" O'Reilly asked.

"As I say," she replied, "they're in there trying to convince minority women that they're incapable of giving a child life."

"Why are they doing that?" O'Reilly asked again.

"They're doing that because they have too many people deceived," the former governor said.

"I just want to know whether you believe Planned Parenthood has a motivation to target minority women," an exasperated O'Reilly asked. "Is there a reason they're in the poor neighborhoods?"

"Planned Parenthood is a bogus business," she said, "they're in it to make money and to profit." Sadly, the segment ended before she could explain how targeting poor people for low-cost medical procedures would work as a business model -- or with admitting to O'Reilly what she wrote about on length on Facebook, that she believes Planned Parenthood is fruit from Margaret Sanger's poisoned tree.