"Right now, I am entirely about sex. I just wanna get laid": A who's who of cult classic "Wet Hot American Summer"

Netflix's prequel to the iconic 2001 comedy rolled out today 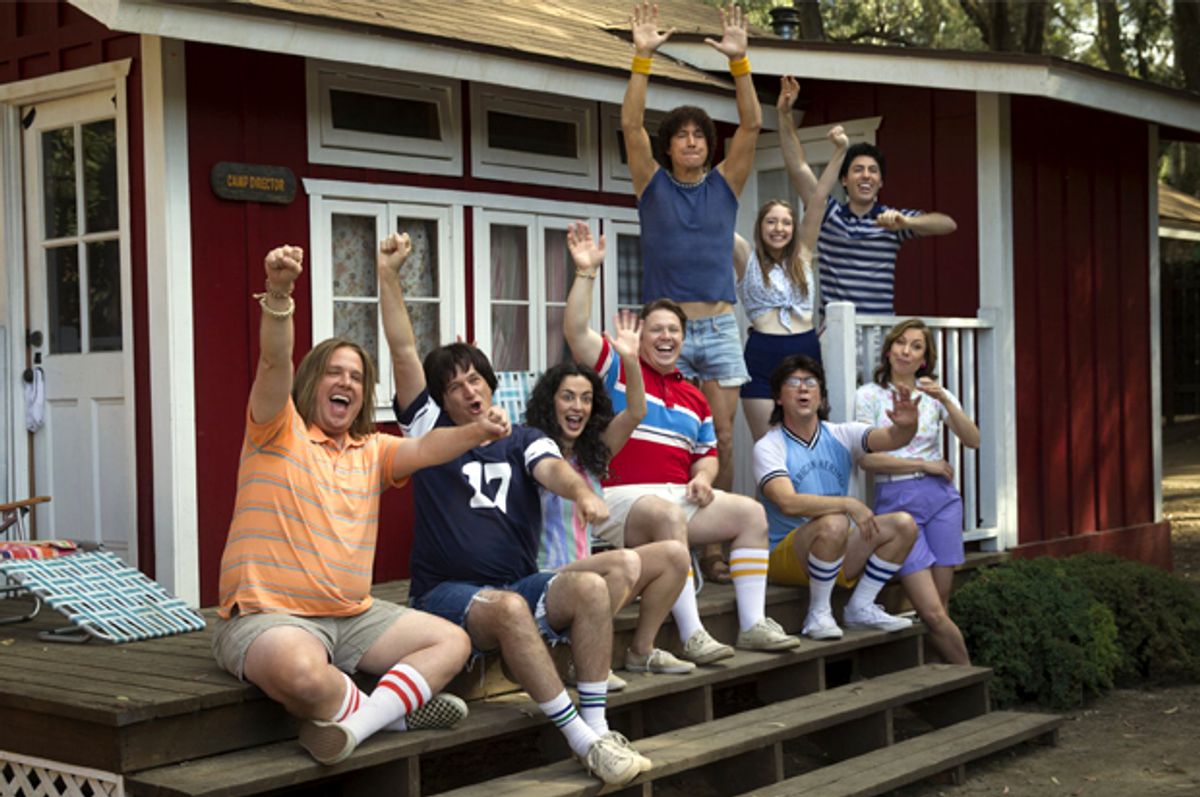 Netflix’s “Wet Hot American Summer” prequel series “Wet Hot American Summer: First Day of Camp” rolled out today, complete with a stacked comedy cast full of new faces — hello, Jo[h]ns Slattery and Hamm! — and plenty of returning favorites. As you prepare to head back to Camp Firewood for eight glorious episodes, here’s a reminder of some of the most important characters from the 2001 cult classic.

Paul Rudd
Name: Andy
Bio: Terrible boyfriend, terrible lifeguard, make-out bandit, world-historical tantrum-thrower.
Most likely to be overheard saying: “You taste like a burger. I don’t like you anymore."

Amy Poehler
Name: Susie
Bio: Hard-ass drama counselor who pronounces amateur "amatooooour" because that’s how they say it in the THEATER, plebeians!
Most likely to be overheard saying: "Before we start, I'd just like to say the campers you're about to see suck dick! But nevertheless, please welcome them."

Michael Ian Black
Name: McKinley
Bio: McKinley is best-known around Camp Firewood for his feathery-soft flow, super short-shorts, and his tender romance with fellow counselor Ben (Bradley Cooper).
Most likely to be overheard saying (while planning a camp reunion in a decade from now): "Why don't we say 9:30, and then make it your beeswax to be here by 9:30? I mean, we'll all be in our late 20s by then. I just don't see any reason why we can't be places on time."

Bradley Cooper
Name: Ben
Bio: Susie's well-turned-out drama counselor sidekick, Ben is committed to two things: His beau McKinley, and putting on the best darn talent show EVER.
Most likely to be overheard saying: "I'm only speaking from personal experience, but if you can't carry a tune, don't come into the audition environment and waste our time. For serious, OK?"

David Hyde Pierce
Name: Henry
Bio: Henry may only be an associate professor of astrophysics, but that doesn’t mean he and his band of “indoor kid” campers doesn’t have the smarts to save Camp Firewood (and his sweetheart, Beth) from being crushed by an errant piece of NASA's Skylab hurtling toward Earth.
Most likely to be overheard saying: “You might suggest every one of us is is a crew member on spaceship Earth."

Janeane Garofalo
Name: Beth
Bio: As camp director, Beth has a lot to deal with: A budding but bumpy romance with astrophysicist Henry, lovestruck counselors who abandon their kids during dangerous whitewater rafting excursions, and a piece of space debris hurtling toward the mess hall. But boy does she love camp!
Most likely to be overheard saying: "Well, we've made it to the end of the summer in one piece, except for a few campers who are lepers."

Molly Shannon
Name: Gail
Bio: Prone to tearful outbreaks during arts and crafts class over her good-for-nothing ex-husband, Ron von Kleinstein.
Most likely to be overheard saying: “I hope you like shrimp cocktail, because I want you to be guests of honor at our wedding next week!”

Elizabeth Banks
Name: Lindsay
Bio: The camp's resident wild child, Lindsay just wants to have fun and hook up with Andy, barbecue sauce and burger breath be damned.
Most likely to be overheard saying: “It’s just barbecue sauce. Come on, I wanna make out!"

Michael Showalter
Name: Coop
Bio: Coop is a hopeless romantic who just wants Katie to leave Andy and be with him. He’s even willing to overlook some of her biggest flaws, like the fact that she’s sometimes late for shul.
Most likely to be overheard saying: "Katie, I love the way you laugh and I love the way your hair smells and I love it that sometimes for no reason you're late for shul, and I don't care that you're bowlegged and I don't care that you're bilingual -- all I know is that I would have said no to every single person on your list because I've always wanted you."

Christopher Meloni
Name: Gene
Bio: Bandanna-wearing Vietnam veteran/camp chef prone to erratic outbursts, sweater-fondling, fridge-humping, and conversations with inanimate objects. His best friend is a can of mixed vegetables, and he is not ashamed.
Most likely to be overheard saying: "Cooking for all you nice people has really helped me get over the fact that I fought in the Vietnam War. Have a great winter, I’m gonna go hump the fridge. Yes, folks, it’s true. I said I’m gonna go hump the fridge. What you may not know is that I also own a bottle of dick cream, I fondle my sweaters, and I often like to smear mud on my ass. You’re probably asking yourselves, 'Isn’t he a weirdo, outcast, loose cannon?' Maybe. I don’t think so."

Ken Marino
Name: Victor
Defining characteristics: While his majestic fro and sweet puka shell necklace might suggest otherwise, he is still a virgin — and he’s determined to put that right before the summer ends, even if that means abandoning a group of campers to die in a tragic whitewater rafting accident.
Most likely to be overheard saying: “Wait for me, Abby Bernstein! Wait for me, my darling!"

Marguerite Moreau
Name: Katie
Defining characteristics: Katie is Firewood's resident hot girl and Coop's unrequited love interest, but she can't bring herself to leave her good-for-nothing boyfriend Andy, because, well, he's really hot. Like, cut. From marble.
Most likely to be overheard saying: "I like you more than I like Andy, Coop, but I'm 16. And maybe it'll be a different story when I'm ready to get married, but . I just wanna take him and grab him and fuck his brains out, ya know? So that's where my priorities are right now. Sex. Specifically with Andy and not with you."