"Something is very wrong in our society": Father of mass-shooting victim calls for an end to the carnage 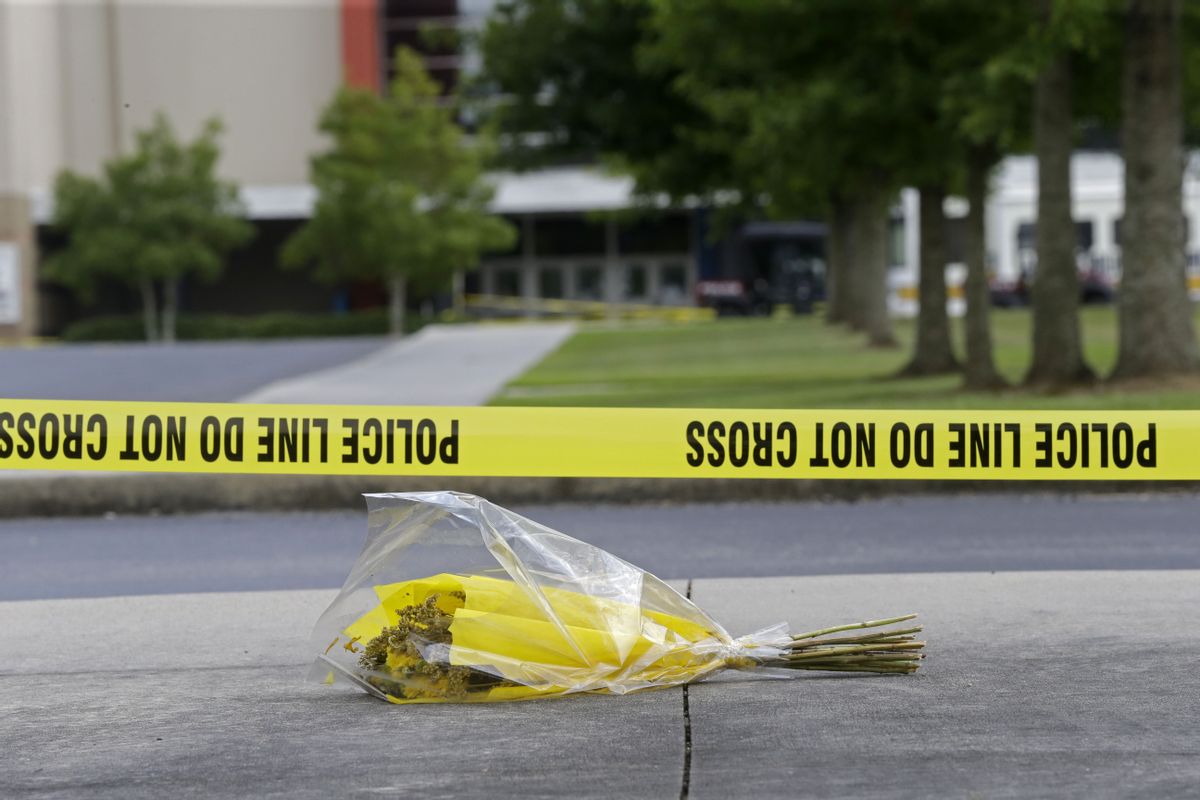 A bouquet of flowers lies net crime scene tape in the parking lot outside The Grand 16 movie theater in Lafayette, La. (AP/Gerald Herbert)
--

I was heartbroken and enraged to hear that a man with a gun was able to kill two young women and injure at least nine others in a Lafayette, La., movie theater last week. Once again, a community is reeling from a senseless act of gun violence and our hearts go out to them, the victims and those whose lives will be forever changed by the tragedy in Lafayette.

My wife, Caren, and I know all too well what they are experiencing right now -- exactly what we felt three years ago and will live with for the rest of our lives. On July 20, 2012, a gunman opened fire in an Aurora movie theater and killed our 24-year-old son, Alex, along with 11 others, and wounded 70 more physically and hundreds more mentally. Alex was a counselor, helping students and troubled youth. He was the very embodiment of goodness, and he was a true hero. Alex’s final act was shielding his girlfriend from gunfire.

Another man with a gun. Another movie theater. Another devastated community. Something is very wrong in our society when Americans can’t feel safe in a movie theater, their school, where they worship, or in a shopping mall. And while media was reporting on the third high-profile shooting in four weeks, dozens more Americans were being shot and killed. We don’t know their names, we don’t hear their stories. They are taken from this world, their senseless deaths leaving behind an endless wake of pain and suffering for their families.

Enough is enough. It's time for our elected leaders to stand up, take action and stop putting gun companies’ profits ahead of lives. The time is way overdue for politicians in Washington to step up and do something about this epidemic of gun violence that is destroying our country. We have an entire federal department devoted to terrorism from outside our borders. What about the terror our communities and families are experiencing right here within our borders? It’s time for meaningful solutions to ensure Not One More life is taken by gun violence.

Failure to act makes our politicians culpable for this unending carnage.

As I learn more about what happened in Lafayette, I am angry. I am angry for the parents and loved ones of 21-year-old Mayci Breaux and 33-year-old Jillian Johnson. These were young women with families, and dreams and futures filled with hope that should never have ended on the floor of a movie theater. I am angry because the shooter was able to easily purchase a gun in Alabama, which has some of the worst gun laws in the country.

There is a clear link between strong gun laws and reduced gun violence. Alabama, with its notoriously lax regulations, is the third most dangerous state in the country for gun violence, lagging only behind Mississippi and Louisiana. Its gun murder rate is a full 74 percent higher than the national average.

After the Aurora movie theater shooting that killed Alex and 11 others, Colorado took action and closed the state’s background check loophole. Given that states like Louisiana and Alabama have such weak gun laws, now is the time for Congress to act to stop the gun violence that kills 88 Americans every day.

This is a national problem and it's time for Congress to listen to Americans, not just the gun lobby, and close the loopholes that make it too easy for dangerous people to get guns. I continue to be perplexed why any rational person would be against background checks. Why wouldn’t we want to keep guns away from people who clearly shouldn’t have them? I can’t understand why we are even debating this.

Strengthen our gun laws. Do it now.