It was a brilliant idea: Buy the original, then commission and sell forgeries. It almost worked ... 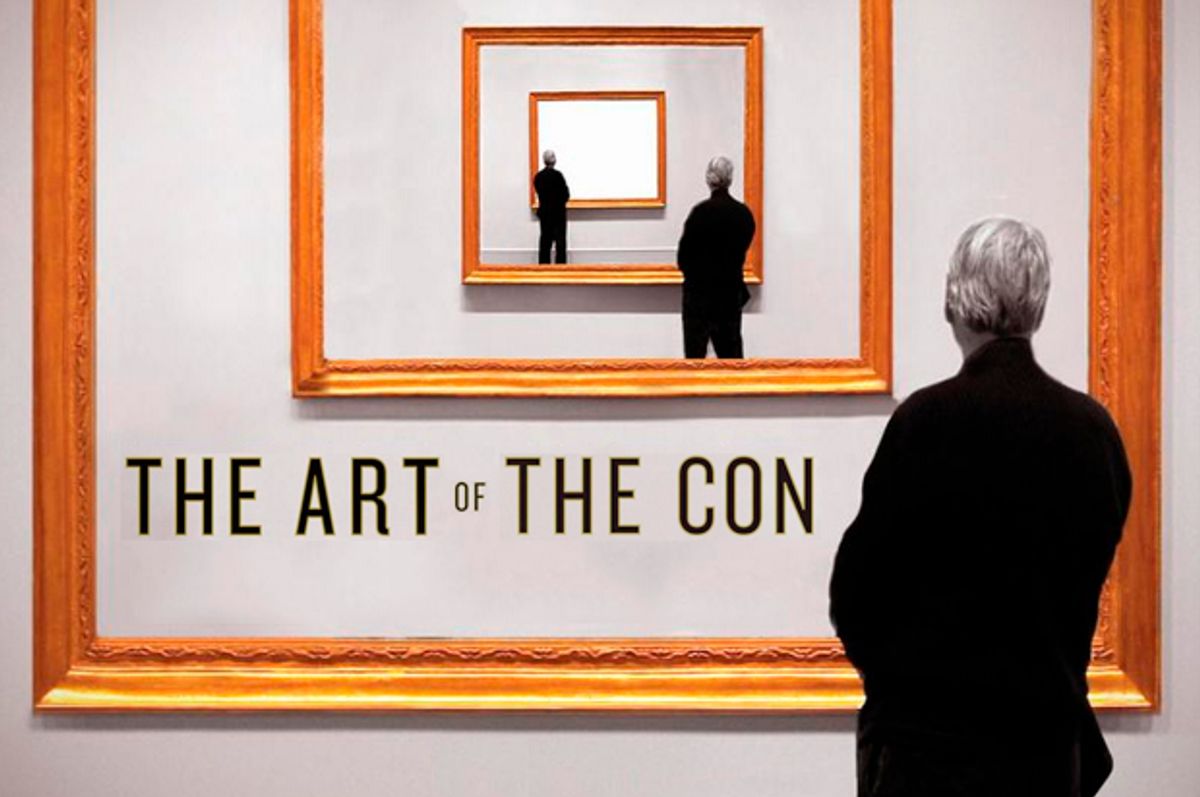 Cover Details of "The Art of the Con" (St. Martin's Press/Photo montage by Salon)
--

Excerpted from "The Art of the Con: The Most Notorious Fakes, Frauds and Forgeries in the Art World"

Without question, attempting to pass off a counterfeit Rembrandt was an incredibly brazen move on Ely Sakhai’s part. But brazen he was, and he did have a certain advantage in his scheme: the legitimate ownership of the authentic painting that he had his artists copy. The authenticity of his Rembrandt, The Apostle James, was not questioned. Nor was the fact that it was purchased by Ely Sakhai from a reputable source. So when he would offer what he purported to be the painting for sale, it didn’t raise questions about authenticity, if only because those interested in the painting perhaps failed to imagine the nefarious scheme of the seller. Thanks in large measure to his travels in the Far East with his wife, Sakhai made it his mission to establish a steady clientele in Tokyo and Taiwan too. and in June 1997, he sold his Rembrandt to the Japanese businessman and art collector Yoichi Takeuchi.

Takeuchi had been a customer of Sakhai’s since 1992, when he started buying art from him in a complicated deal involving a third party who would later allegedly renege on their part in the purchase of the artwork, leaving Takeuchi with paintings he didn’t want. When Takeuchi accused Sakhai of a “fraudulent plot” against him, Sakhai replied that he, too, was the victim and had filed suit against the third party. Of course, he had not. The summons he showed Takeuchi was bogus. With a loan balance still due to Takeuchi, Sakhai made him an offer: he’d sell him The Apostle James for forgiveness of the loan plus $350,000. Takeuchi believed that the painting was authentic, and he would go on to say that he was influenced in his decision to purchase the painting at a dinner in New York with a person who claimed to be a branch manager for Citibank. The Citibank representative, said Takeuchi, certified that the Rembrandt was exhibited in the Metropolitan Museum. So the businessman accepted Sakhai’s offer and made the deal for the Rembrandt.

It stands as a testament to an art lover’s desire to believe that he has made a great find and executed a great deal that Takeuchi purchased The Apostle James from Sakhai. In 1992, near the beginning of their business relationship, Takeuchi was furious with Sakhai over another major purchase. Writing in November of that year, he said, “you have delivered about 500 paintings to us with the condition you provide a provenance and certificate for each painting. . . . We feel we cannot do business in trust with you anymore. . . . This case will become a court case in Japan soon. But we feel very sorry that our trust and friendship will end this way. We also point out that you have to provide provenances and certificates regardless of the situation. if you break your promises, you will be prosecuted as an international criminal.” Given this inauspicious start to the relationship, it is surprising that Takeuchi would continue to conduct business with a person he so described. Nevertheless, he would go on to make the Rembrandt purchase.

Shortly after the transaction was made, Takeuchi turned to two experts to examine his prized Rembrandt for the sake of appraising its value. The pair inspected The Apostle James and came to a clear conclusion: the painting was not what it was promised to be. Takeuchi contacted Sakhai to inform him of the news, but the con man remained steadfast: the experts were mistaken, he told his client. as he had done in 1992, Takeuchi wrote to Sakhai accusing him of selling a “forged Rembrandt piece” to him, threatening to contact the authorities and to file a lawsuit against the dealer. “As it was exactly like before,” Takeuchi wrote, “I was tricked again by your performance. . . . Prof. Tanaka has looked closely to examine the painting, and he concluded this painting is totally different from the one . . . Citibank certified.” Takeuchi added that he had “gotten the report of examination by IR [infrared] and X-ray from the world famous restoration authority, Prof. Kuroe. The result . . . also conflicts from what you said.”

Perhaps banking on the possibility that Takeuchi was bluffing and would not want to suffer the stigma of being played for a fool, Sakhai did not back down. Instead, he continued to deny that the painting was a fake. as Takeuchi would later describe, Sakhai “remained unruffled.” Remarkably, Sakhai played his dupe perfectly. Swayed by Sakhai’s stubborn denial of both Takeuchi’s accusations and the experts’ findings, and the fact that other well-known Japanese buyers had done business with the dealer, he backed down and held on to the Rembrandt. Takeuchi was also buttressed by the fact that Tanaka told him the painting was nonetheless worth about $4.75 million—a curiously high figure for a copy. After all, in 1997, Tanaka wrote to Sakhai, stating that the painting he had sold to Takeuchi was not the authentic The Apostle James and that “the differences between the two” were “easily” detected. So despite being exposed by experts and confronted by a powerful buyer, Sakhai was able to walk away from his sale of a copy unscathed. Tanaka’s unusually high valuation of the painting, perhaps a gesture intended to save his client any further embarrassment, also spared Sakhai an earlier comeuppance. But he was far from done, duping an untold number of buyers in asia and elsewhere. Federal prosecutor Jane Levine would later write that “Sakhai interjected hundreds of forgeries into the international art market.”

Call it karma or serendipity, but Sakhai would be undone by circumstances as simple as his scheme was complex. Not content to simply make enormous profits on the fakes he sold to unsuspecting buyers, Sakhai’s greed led him to sell the original authentic works too. When a few years had passed after he sold his fraudulent works, Sakhai would move to sell the real painting. Because he had used the original certificate of authenticity to sell the copies, he would need to have a new certificate issued. Armed with the real painting and clear title and provenance to support him, obtaining authenticating documents was relatively easy.

One of the originals he decided to sell was Paul Gauguin’s Vase de Fleurs (Lilas). In order to do so he approached Sotheby’s in New York, which promptly listed the painting in their catalog for their spring auction in May 2000. Sotheby’s main competitor, Christie’s, also had a Gauguin for sale in their spring auction catalog: an identical Vase de Fleurs (Lilas). It wasn’t long before the two auction houses communicated with each other and agreed to submit the paintings to an expert to determine whose was the fake. For authentication they turned to Sylvie Crussard of the Wildenstein Institute in Paris.

Crussard is the coauthor of Gauguin: A Savage in the Making: Catalogue Raisonne of the Paintings (1873–1888) and one of the world’s leading experts on the works of the great French Post-impressionist. The painting created by Sakhai’s Chinese copyist was considered by the expert to be “so similar in the detail of brush strokes that one would not notice any differences from photographs if one did not suspect the existence of two versions,” and said it would be “impossible to tell which version should be catalogued” from photographs. However, Crussard knew that Gauguin would never have copied one of his paintings without making changes, and when the two actual works were put side by side, “all doubts were quickly removed.” Crussard examined not only the brush strokes, but the sides and reverses of the paintings and easily found that despite Sakhai’s best attempts to artificially age the copy, they were vastly different. “One looked old and the other new,” she said. “And no one hesitated” in identifying the authentic painting from the fake. The Christie’s version was pulled from its catalog and Sotheby’s sold Sakhai’s original at auction. unlike the better-known works by Gauguin, which can sell for tens of millions of dollars, Vase de Fleurs brought Sakhai more than $300,000.

FBi agent James Wynne worked to find the provenance of the fake, which had been sold to a Japanese collector before making its way to gallery Muse in Tokyo. Based on his decades-long experience in investigating art crimes, he was able to determine that the ownership of both the fake and the authentic paintings intersected at one person: Ely Sakhai. later, more such cases would become known to the bureau. One buyer who purchased a work by the swiss painter Paul Klee later found that the identical painting was being offered by Sotheby’s. Alarmed, the collector alerted investigators, who tracked those paintings back to Sakhai as well. Soon, thanks to the dogged efforts of agent Wynne, feds were able to track a dozen such incidents involving Sakhai, beginning 14 years earlier when he bought Marc Chagall’s La Nappe Mauve at Christie’s in London for about $300,000. He fraudulently sold a copy of the painting three years later for nearly a half-million dollars; five years after that, he sold the authentic work for over $30,000 more than he paid for it.

Wynne’s work on the case was nothing short of painstaking. In addition to the intense provenance research he completed, he also set about doing stakeouts of Sakhai’s establishment to find who was painting the copies. said prosecutor Jane Levine, “Jim Wynne was able to identify, locate, and speak to many of the artists that had actually created the forgeries.” Once he had interrogated the Chinese artists, Wynne was able to convince them to provide evidence of Sakhai’s scheme. The artists gave Wynne photographs documenting the copies they had made. said Wynne, “To me this was the most significant event in the history of the case, because we now had Mr. Sakhai commissioning, ordering, orchestrating the entire scheme.”

On March 9, 2004, Ely Sakhai was arrested in his gallery in New York on federal mail and wire fraud charges by James Wynne and a number of his fellow FBI agents. Three months later, a southern district of New York grand jury indicted Sakhai on those charges as well as the related conspiracy. a September 2004 statement to stockholders of another of Sakhai’s business ventures, Australian-Canadian oil royalties, declared that Sakhai had been indicted but that he, as the company’s president and director, “vigorously” denied the charges. That vigorous denial didn’t last long. as happens with so many art fraud con men, Sakhai realized the government’s case against him was rock solid and pleaded guilty on November 29, 2004, to the conspiracy and mail fraud charges. he also agreed to an enormous restitution agreement that would require him to repay $12.5 million to his victims in addition to the forfeiture of 11 paintings.

At his sentencing, Judge Loretta A. Preska sentenced Sakhai to 41 months in a federal penitentiary. Yoichi Takeuchi attempted to sue Sakhai in a New York federal court for damages related to the sale of the phony Rembrandt painting, but he was unsuccessful due to the statute of limitations on his case. he is not alone in his loss. As Sakhai’s prosecutor Jane Levine has written, despite a six-year intensive investigation into Sakhai’s wide-ranging fraud, “we do not know and may never know the full scope of the crime and the damage caused.” She added that the damage done by Sakhai “will reverberate in the art world for many years to come,” because Sakhai’s copyists made hundreds of copies for him that are still out there in the hands of unsuspecting dupes, all wanting to believe they have the real thing.

Excerpted from "The Art of the Con: The Most Notorious Fakes, Frauds and Forgeries in the Art World" by Anthony M. Amore. Published by Palgrave Macmillan Trade, a division of St. Martin's Press. Copyright 2015 by Anthony M. Amore. Reprinted with permission of the publisher. All rights reserved.