Charles Koch's Messianic delusions: Industrialist says only conservative billionaires can save us 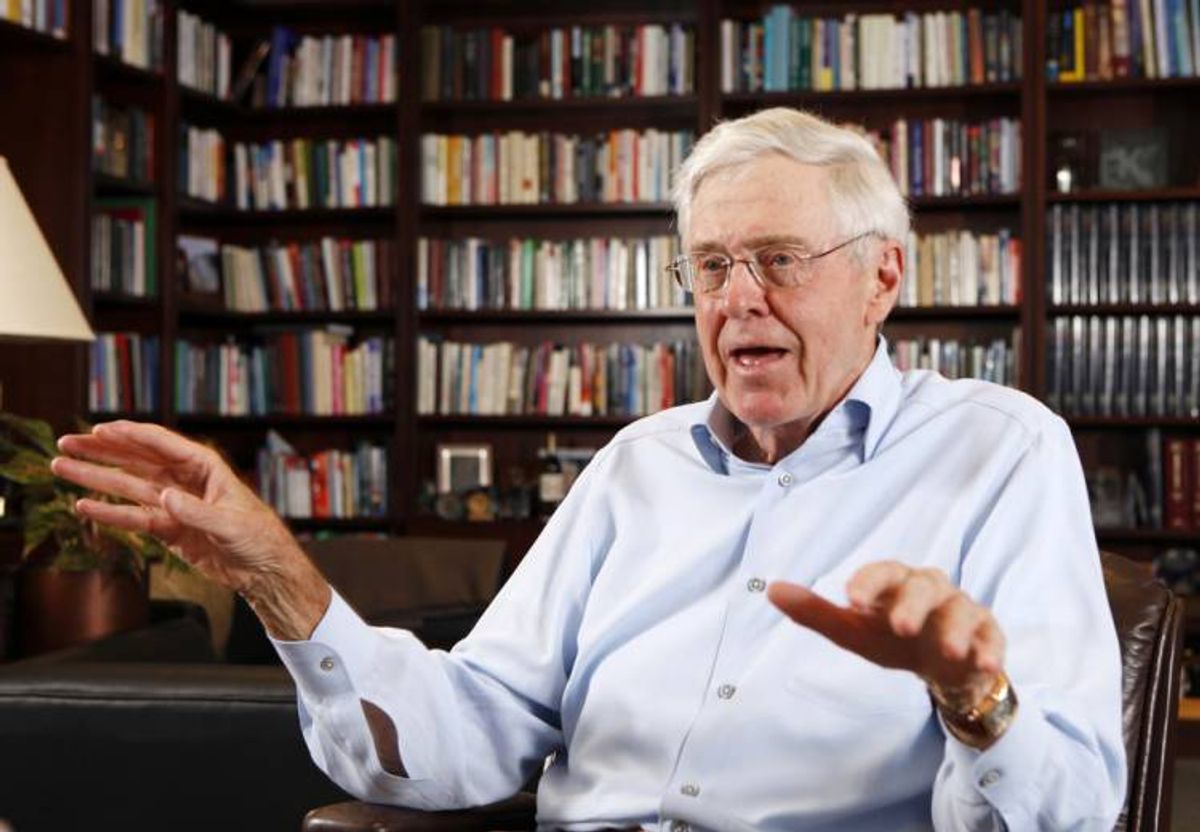 Billionaire Charles Koch argued that conservatives are part of a “a life-or-death struggle for our country,” and that if the political network spearheaded by himself and his brother David fails to convince a "majority of Americans behind the vision, then we’re done for," the Associated Press reports.

Koch spoke before a record 450 attendees at a semi-annual three-day conservative confab hosted by the billionaire brothers this weekend where GOP presidential candidates Carly Fiorina, Scott Walker, Marco Rubio, Jeb Bush and Ted Cruz all gathered to cozy up with Koch network donors who have pledged to spend nearly $1 billion to elect a Republican presidential candidate in 2016.

At the ritzy St. Regis Monarch Beach in sunny Dana Point, California, the elder Koch brother made a series of rather unexpected comparisons between his and his brother's over decade-long fight to gain unimpeded influence in the American political process with a plethora of social justice fights to win freedoms for Americans throughout history.

In particular, Koch cited his network's fight for criminal-justice reform as an issue that has gained traction amongst mainstream Republicans because it “strikes the same chord as past successful freedom movements.”

“Look at the American revolution, the anti-slavery movement, the women’s suffrage movement, the civil rights movement,” Koch instructed the gathered conservatives. “All of these struck a moral chord with the American people. They all sought to overcome an injustice."

"And we, too," he claimed, "are seeking to right injustices that are holding our country back.”

The Koch network's "aim," the billionaire libertarian claimed, is “to remove the shackles preventing all Americans, especially the disadvantaged, from pursuing their dreams” and to create a “truly free society.”

“If we can just change the trajectory of this country from where it is headed — one of control, dependency, hopelessness and poverty — to one that moves toward this free society, the innovation, the improvement in the standard of living, the helping of the poor uplift themselves will be staggering,” he added.

“History demonstrates that when the American people get motivated by an issue of justice, that they believe is just, extraordinary things can be accomplished, and that’s the message for all of us,” Koch argued, imploring the wealthy donors to "stand with us to help save our country."

“If we cannot unite the majority of Americans behind the vision, then we’re done for,” he explained further. “So that to me has to be our number one objective. But to do so, we’ve got to do a much better job of understanding what matters most to people, and then to demonstrate that a free society gives them the best opportunity of achieving that.”

He continued his Messianic streak when he depicted the Koch network as advocating against entrenched inequality. "We're headed toward a two-tiered society -- a society that's destroying opportunities for the disadvantaged and creating welfare for the rich," Koch admitted. "Misguided policies are creating a permanent underclass, crippling our economy and corrupting the business community," he said before adding the caveat, "present company excepted of course."

Carly Fiorina, one of six Republican presidential candidates invited to the Koch summit, applauded the billionaire brothers' efforts, hailing them as “people who care deeply about our nation, and who are willing to put their time and their energy and their resources and their minds to the challenge of making a better nation.”

“It’s one thing for Democrats to complain about corporations getting engaged in politics, and yet they never have a problem with unions getting engaged in politics,” The New York Times quoted Fiorina as saying, defending the Koch's oversized influence in the political process. “We have a right — everyone has a right — to speech in this country. And as we all know, any kind of speech costs money in this country.”

Wisconsin Governor Scott Walker, who is infamously and intractably linked to the anti-union duo, was also full of praise for the Kochs and the vast network of likeminded conservatives. “So many of you here aren’t here because of any interest on behalf of your personal finances or your industries, you’re here because you love America,” Walker said, before comparing the multi-millionaires in the Koch network to populists Tea Partyers in Wisconsin. “I think David and Charles have kind of harnessed that frustration,” Walker argued.

For his part, Republican frontrunner Donald Trump, a billionaire in his own right, mocked his fellow GOP presidential candidates for attending the Koch retreat on Twitter this weekend, questioning if those in attendance were "puppets" for having "traveled to California to beg for money etc. from the Koch Brothers":