"It's OK to always be a loser": Patrick Stickles reveals the secrets of Titus Andronicus

Stickles drops his theories on the 24-hour news cycle, his new rock opera and the rigged games of fame and fortune 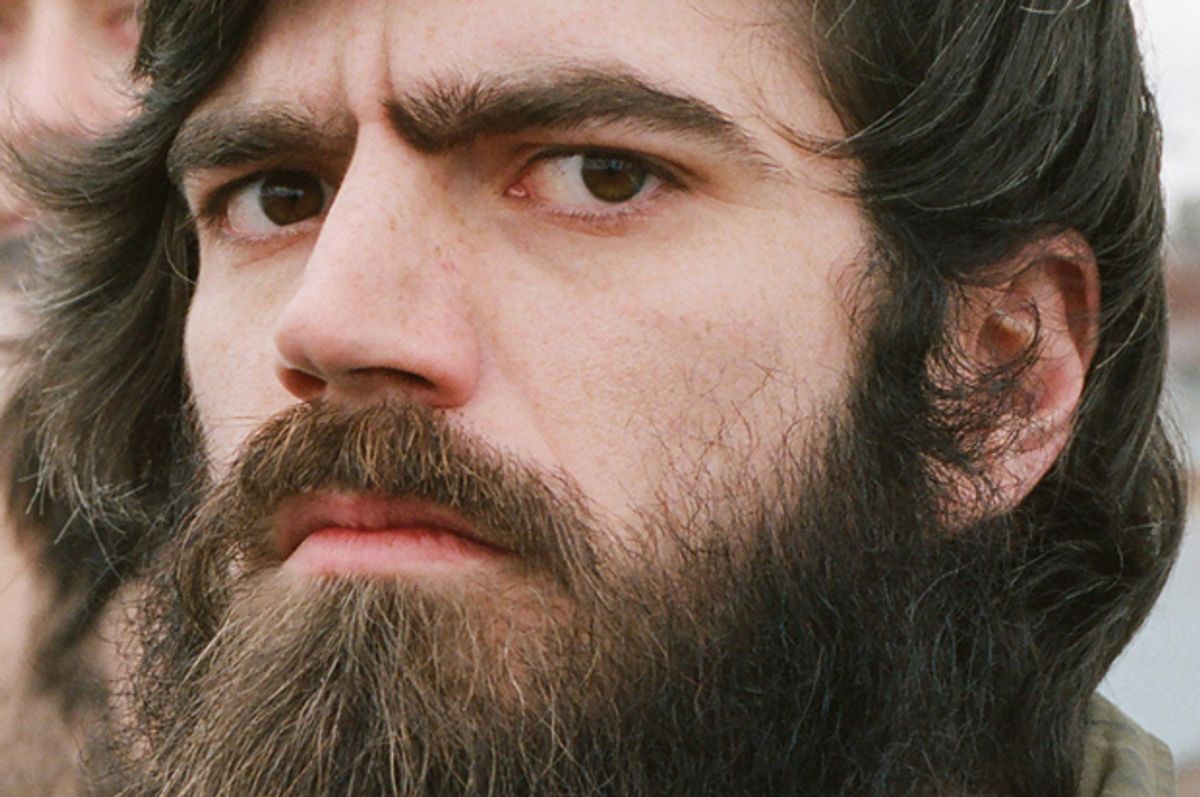 Patrick Stickles just turned 30. The frontman of Titus Andronicus celebrated by singing Billy Joel and Replacements songs at the end of his fifth concert in a row in Brooklyn, New York. When he and I talk, he's cleaning up the band's practice space in preparation for a tour in support of his band's new rock opera, "The Most Lamentable Tragedy." Lately, he's been watching an Eagles documentary on Netflix to deal with his worsening tinnitus.

"It's leading to some pretty interesting auditory hallucinations," says the songwriter. "So that's fun to be lying in the darkness late at night and hear something. The other night, at about 5 in the morning, it was 'Take It to the Limit.' I never liked the band but I'm obsessed with this movie now."

It's a shame sleep is starting to get harder for Stickles, considering the first track on his new album finds him screaming the refrain, "I hate to be awake," over and over. It seems the thing keeping him content to move through his waking hours is his endless capacity for analysis and deep thought about, well, everything — his interests run from Shakespeare to Springsteen spaces, from Nietzsche to Naked Raygun.

"The convergence between high and low art is right there in the name of the band," he observes. "That was Shakespeare's most low-class play. I've discovered that a lot of scholars now postulate Shakespeare may have intended it as a parody, a farcical exaggeration of tropes from the ancient tragic form. That's why there's an outrageous number of murders and all kinds of gruesomeness. But who knows?"

The new record takes the Shakespearean allusions even further, given its dramatic Elizabethan title. But the music contained therein isn't anything you'd characterize as of the Bard's time. Other than a few forays into Celtic music, it's rock 'n' roll wall to wall. With that said, it's every kind of rock 'n' roll at once. Part of the reason for that is Stickles seeing no rhyme or reason in musical elitism. Elevating punk rock or anything else to be the only valid form of artistic expression is foreign to him.

"Those distinctions are just an arbitrarily drawn line from some authority who appointed themselves anyway," he says. "It's a question of what's the essential component of Bruce Springsteen or the Replacements or any of these groups. What is it that draws people to them? Is it because Bruce Springsteen wants to invite the whole world in? Is it because the Replacements want to shut the entire world out and piss on the whole thing? Or is it something else? Is it some sort of way they have of communicating frustration, perhaps, or defiance in the face of hopelessness?"

It's especially silly to him since the Replacements got their start covering other people's songs in the same way he covered theirs a few nights back.

"They spent the first five or six years of their career on stage covering Tom Petty or whatever and having a laugh," he says, with a hint of a smirk on his face. "They started out in a suburban basement cover band and they put a Kiss cover on their best album. They obviously were not at home listening to Throbbing Gristle exclusively."

Neither is he. The styles and influences casting a shadow on the Titus Andronicus discography are almost too numerous to count. For a band whose pet subject matter is how depressing and worthless life can seem, they create a sound that is about as affirming as it gets. Then again, isn't that existentialism in a nutshell? You lose the meaning of life only to be able to create it yourself. You lose the conventional institutions that keep morality or meaning in place, but are given the ability to decide for yourself where to belong.

"It's just playing a game where it's impossible to win because it's rigged and why would you want to win in the first place when the rules are so perverted by so many crushing compromises, sacrifices, humiliations, degradations?" he asks. "The indignity of it all, who would want to be a winner in that game? That's why we say it's OK to always be a loser."

The same message applies to the punk spirit Stickles holds so near and dear. For a genre so keen on breaking all the rules, it ended up creating a few for itself along the way. You can only do this or that, and so forth. Upon a bit of reflection before writing and recording "The Most Lamentable Tragedy," Stickles realized he'd even created these sorts of arbitrary statutes for himself.

"Mom and dad make rules. The principal makes rules. What did I get into the punk rock business for if I just wanted to make rules? I don't want to follow them, I don't want to make them, I just like breaking them, especially if they're my old rules."

At the end of the day, he views the new album as yet another way to push the limit. His ambitions all seem to lie in the realm of increasing authenticity. If he isn't staying true to himself and figuring out what it means to be true to himself in the first place, it doesn't seem to be of any interest to him. For Stickles, life and artistic creation is all about breaking down walls — indeed, realizing most walls don't exist in the first place,

"They're all boundaries to keep ourselves from getting hurt or from making ourselves vulnerable," he says. "People know and understand being vulnerable is the first step to any kind of major, substantive happiness. People seem to forget vulnerability is also the first step towards getting hurt physically, emotionally, any kind of which way. A lot of times you hand that power over to people, in an emotional way, at least. For someone to really hurt your feelings, they have to either be articulating a truth about you that you don't want to face but you know to be the case, or they are someone you respect, love or care for and their opinion of you is actually relevant."

One thing Stickles doesn't find particularly relevant is appeasing music critics. The Internet and all the blogs devoted to picking apart the work of musicians is a bit of a thorn in his flesh. Titus Andronicus sprang to the forefront when they released their sophomore record, "The Monitor," an expansive album that borrowed from the American Civil War to explore themes of personal inconsistency and insecurity. The band and the album enjoyed the praise and acclaim of countless music journalists, only to see the same sites sort of shut down their follow-up, "Local Business." He thinks of it as a specialized content machine whose opinions shouldn't necessarily be trusted.

"It's like when the 24-hour news cycle got introduced," he notes. "When that happened, a lot of fake news became important and there were a bunch of new games the media could play to fill up the time because not that much shit is going on that people care about. That's not even relevant to our world anymore. With the Internet, shit is so specialized there doesn't need to be a search for a consensus. That era on this planet is over."

The only thing he requires of himself and his band is cultivating an authentic sound that ends up resonating with listeners.

"Fans just want the artist to keep going," he says. "Every time I meet them, that's what they tell me. They always leave with the sentiment to keep doing what I'm doing. There's the implication, 'I know it sucks, I know you're getting a dump taken on you every day, but just keep doing it because even if it seems meaningless to you, it's anything but meaningless to me and all these people here.' That's the artist's real currency. This buzz band, website shit, it's very fleeting."

As far as being buzzed about even goes, he doesn't even view it as worth the struggle. The old rewards of rock 'n' roll are sort of out the window these days. He doesn't think a rock band like his is going to fill Madison Square Garden any time soon and he's more than fine with that.

"There are less and less reasons to sell out because there's less and less of an incentive," he explains. "There's less money, less fame, fewer drugs, whatever. All that remains is what our band's got, not to brag. All that remains is your relationship with the people to which your music actually means something. That's why this band survived being a buzz band when other bands don't. That's why we made it to 10 years when a lot of bands don't make it to five. Again, I'm not bragging. A lot of these artists today aren't playing a long game but that's nothing against them because the system doesn't reward that. Going after the crown is an illusion."

"I need to be an artist, it's the only job that I can have," he adds. "I'll do it whatever which way, by hook or by crook, but I know I'm not gonna get to do it when I'm 80 if I sacrifice my integrity now, play a short game and try to dazzle every website."

With that sort of value set, it's hard not to root for Titus Andronicus. Writing a massive rock opera isn't a reach for financial excess or limitless fame. They did it because they wanted to do it and the reward is knowing other people enjoy it. Being an honest rock band singing honest songs seems to be working out.