Kelly Osbourne's Donald Trump fail: Fighting his racism with her own harmful stereotypes

Her appearance on "The View" didn't go over as she planned 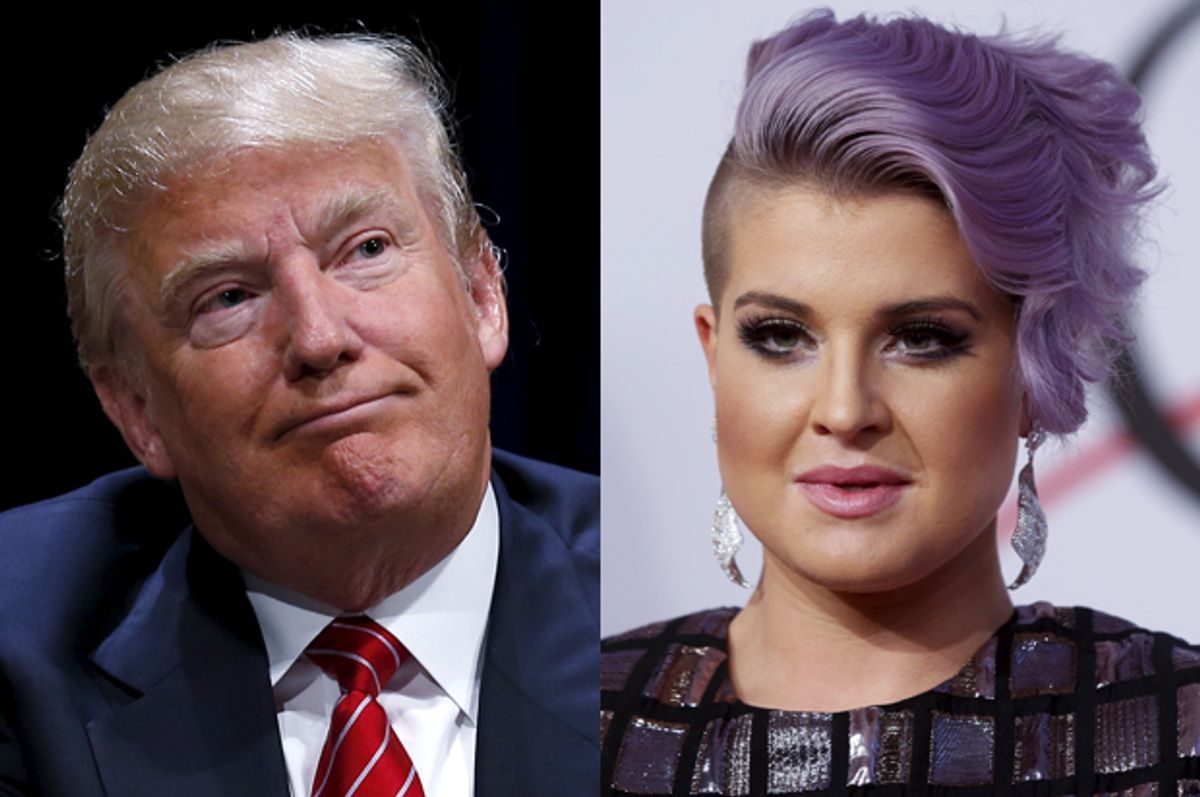 Well, the Donald Trump Award for insensitive statements about race just went to … someone assailing Donald Trump. Or specifically, to Kelly Osbourne, the daughter of Ozzy and reality TV mainstay, who was referring to Trump’s nasty comments about Latinos coming to America to rape and pillage.

Osbourne was on “The View,” where Whoopi Goldberg mentioned Trump’s steadiness in the polls; Rosie Perez, Michelle Collins, and Raven-Symone batted the idea around a little bit. Osbourne made a good point with, "In what way does he think that people are going to vote for him after he's just called them rapists and murderers?"

But then, she tossed out these two cents: "If you kick every Latino out of this country, then who is going to be cleaning your toilet, Donald Trump?" Osbourne asked. "In the sense that...you know what I mean? But I'm saying that in L.A., they always..."

Perez seemed a bit thrown and fired back, "Latinos are not only the only people doing that." Osbourne appeared to be attempting to describe how rich people (and in California, most people) depend on the labor of Latino immigrants. Collins articulated this a bit more clearly, helping her out with, "I think what you're saying is that Trump himself probably relies on a lot of these people he's insulting,"

But by then the damage had been done, and Twitter erupted, with many critical tweets aimed at Osbourne. (Perez, for what it’s worth, forgave her.)

So this was clearly a pretty bad foot-in-mouth move by Kelly Osbourne: If you are trying to offer a retort to Donald Trump, this is clearly not the best way to do it.

It’s worth keeping in mind that the point she might have been trying to make was better made about a decade ago by Sergio Arau, a Mexican filmmaker and musician, in his 2004 movie “A Day Without a Mexican.” The movie was a mockumentary that looked at the state of California if it were shorn of its immigrants from south of the border. Some called the scenario an apocalypse; the governor declared a state of emergency. Lawns don't get mowed, restaurants don’t get cleaned, fruits and vegetables become hard to find. The film hardly dented the box office or moved the critics, but anyone who's lived in California gets the larger point.

Here’s what a somewhat earnest story from CNN’s Chris Garcia, which references the movie and looks at economic impact, concludes:

…In the long run, a day without Mexicans would deal a devastating blow not just to California, but to the U.S. economy. It is time to cease the mantras that enforce the idea that illegal immigrants are nothing more than leeches to our society, and embrace the realities of what these people actually contribute to our economy: a financial fountain we would be foolish to shut off.

So again, Osbourne was at least not far from making a decent point, though it must also be said that a Mexican filmmaker making that point with an incisive piece of political satire and the well-to-do daughter of a rock star tossing off a similar argument on a chat show are not the same thing.

As distasteful as this was, let’s also note that Osbourne is not running for a powerful public office — Trump is. And while much of the mainstream press and media dismissed Trump as just a wacky outlier who could never get close to the nomination, the billionaire bully seems to be (however inexplicably) broadening his appeal. The Washington Post’s Chris Cillizza wrote one of the many pieces, back in June, telling us not to worry about Trump. Today, he came up with “Boy, was I wrong about Donald Trump. Here’s why.”

Why did I miss Trump's appeal so badly? Simply put: I had NEVER EVER seen a reversal in how people perceive a candidate who is as well known as Trump -- much less a reversal in such a short period of time. I based my conclusion that Trump would never be a relevant player in the Republican primary fight on the ideas that once people 1) know you and 2) don't like you, you can't change those twin realities much.

Most mainstream journalists just won’t admit to themselves how dominant the fringe-y types have gotten on the right. They aren’t the entire party, or the whole of the conservative movement, but they are no longer a tiny minority. It’s a good day to be a deep-pocketed hatemonger.

Osbourne deserves a few days of dissing. But let’s not forget who the really dangerous one is here.