Bernie Sanders is no Barack Obama: Even if he wins Iowa & New Hampshire, he's unlikely to dethrone Clinton

The Sanders surge is all the rage following another neck-and-neck poll. Let's keep things in perspective here 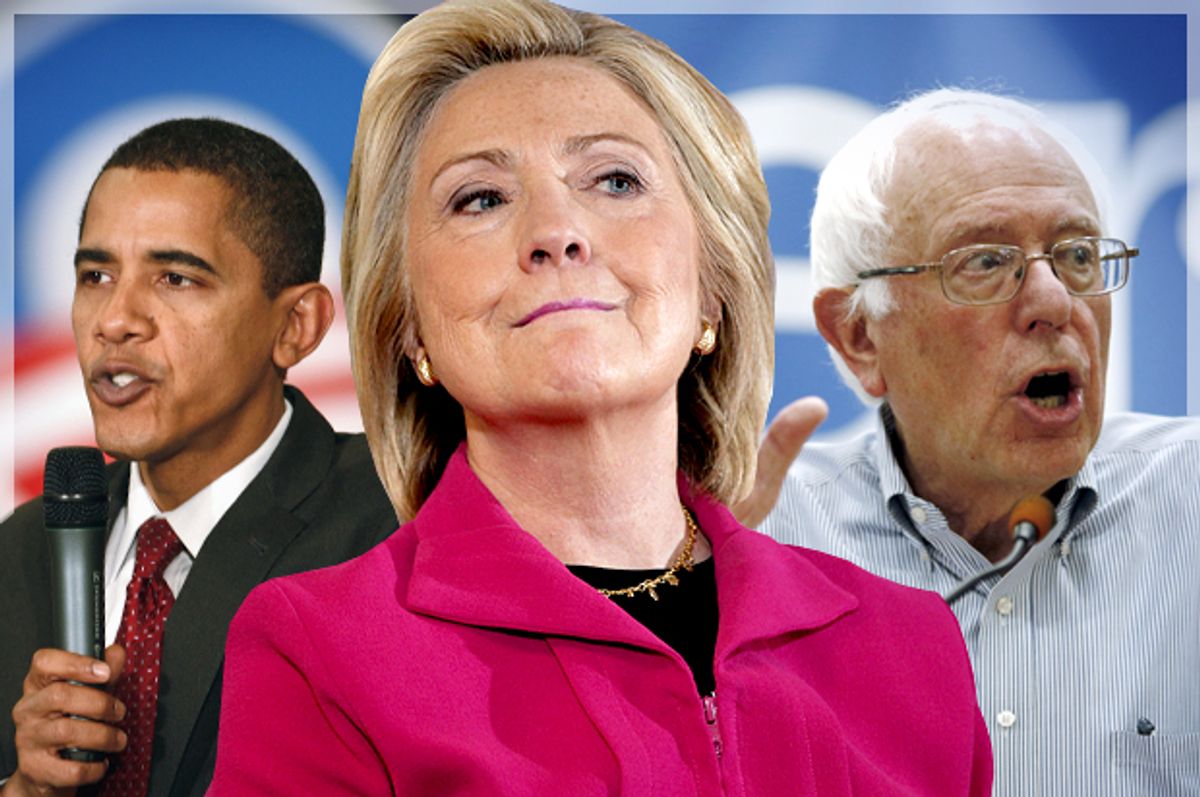 Proclamations of a Bernie Sanders surge returned this week, with the release of a new poll showing the democratic socialist senator from Vermont trailing Hillary Clinton by a mere 6 percentage points in New Hampshire, home of the nation’s first presidential primaries. In the survey, from WMUR and the University of New Hampshire, Sanders took 36 percent of the vote to Clinton’s 42 percent; though that result marked virtually no change from a June WMUR survey showing Clinton ahead 43 percent to 35 percent, it confirmed that the Democratic front-runner is perhaps most vulnerable to a primary defeat in the state that revived her presidential prospects following her 2008 loss to Barack Obama in Iowa.

Obama’s victory in the Hawkeye State propelled him from long-shot challenger to viable contender, delivering crucial momentum ahead of the primaries in New Hampshire, where he only narrowly fell short of dispatching Clinton, and in South Carolina, where he thumped the erstwhile front-runner by a 29-point margin. Naturally, a series of better-than-expected polls for Sanders in Iowa and New Hampshire raises the question of whether we’re in for a repeat.

We almost certainly are not. But before we get to that, let’s look at the data points that have Sanders acolytes increasingly giddy. Though Clinton retains a commanding lead in most national and primary state polls, her advantage is no longer as overwhelming as it once was. Take Clinton’s performance in two recent NBC/Wall Street Journal surveys: In June, just after the former secretary of state kicked off her campaign with a well-choreographed rally on New York City’s Roosevelt Island, Clinton led the field by a whopping 60 points, taking 75 percent of Democratic primary voters to Sanders’ 15 percent. This week, NBC/WSJ released their latest poll, which found a 43 percent plunge in the size of Clinton’s lead; she now wins 59 percent to Sanders’ 25 percent, with no other candidate garnering more than 3 percent support. That survey dovetailed with a larger downward trend for Clinton; Real Clear Politics’ polling average now shows her leading Sanders by just under 36 points, compared with a lead of nearly 50 points one month ago.

Then, of course, there’s New Hampshire, where Clinton averages 44.8 percent to Sanders’ 31.6 percent. In Iowa, whose caucuses are often dominated by progressive activist types, Clinton is more comfortably ahead, but there are signs she’s slipping. When she launched her bid in April, Clinton’s Iowa lead averaged about 48 points; her advantage has since been cut nearly in half, as Real Clear Politics now shows Clinton with 53.5 percent and Sanders at 25.5 percent. With surveys showing many voters still unfamiliar with Sanders, he’s likely to edge even closer to Clinton as the primary process begins in earnest.

Now for a reality check. There’s ample reason to believe Sanders may yet ascend further, but the fundamentals of the Democratic primary campaign are stacked decisively against him. Consider Clinton’s national polling edge: While she “only” leads by about 36 points now, that’s still larger than the 33-point advantage she boasted at her apex in the 2008 cycle. Moreover, though Clinton is currently in a worse position in New Hampshire than she was at a comparable point in 2007, her standing in Iowa is considerably more robust. In the year leading up to the 2008 caucuses, Clinton, Obama and John Edwards duked it out for the lead in the Hawkeye State, with Clinton peaking just after her January 2007 campaign launch, when she led the field by 17 points. In the months leading up to her chastening third-place finish, Clinton never enjoyed more than an 11-point edge in the state, whereas a poll showing a 19-point Clinton advantage over Sanders is what passes for ominous this go-around.

Of course, it’s not unprecedented for a challenger to close gaps of 13 or 28 points, so it would be foolish to dismiss Sanders’ chances of pulling off upsets in New Hampshire or Iowa. Both states place a premium on retail politicking, and shoe-leather campaigning in the two states has vaulted candidates like Jimmy Carter, Bill Clinton, John Kerry and John McCain from also-rans to front-runners. What’s more, both states’ Democratic electorates are heavily receptive to the strongly progressive message conveyed by Sanders, who has galvanized activists by decrying income inequality and corporate influence. The two states are also very white -- Iowa is 92.5 percent white, and New Hampshire is 94 percent white -- and white liberals are the core of Sanders’ base.

White progressive types were crucial to Obama’s winning 2008 primary coalition. But without Obama’s overwhelming support among African-American voters, we’d now be in the fourth quarter of a Hillary Clinton presidency. Obama’s dominance among black Democrats was no foregone conclusion; Clinton led Obama among African-Americans throughout 2007, thanks in no small part to former President Bill Clinton’s popularity with black voters. Obama’s watershed victory in Iowa, however, convinced many African-Americans that if a black candidate could win even in some of the most lily-white states, perhaps the country was ready for an African-American president, after all. Clinton’s lead among blacks evaporated, and she never regained it. In the states for which exit polling data is available, Obama won the black Democratic vote by margins from 24 to 88 points.

A Sanders victory in Iowa or New Hampshire, by contrast, would have no such psychological power with a crucial segment of the Democratic base. It’s likely, of course, that Sanders would gain some momentum from a win in either state, boosting his performance among demographic groups currently backing Clinton. But Sanders has far more ground to make up with non-white voters than Obama ever did. In a July CNN poll, Sanders ranked third among non-white Democratic voters, taking 12 percent of their vote to Clinton’s 61 percent and Vice President Joe Biden’s 18 percent. (As I documented here, most of Biden’s backers are likely to coalesce behind Clinton should he opt against a third White House bid.) Such numbers pose a formidable obstacle for Sanders as the primary moves beyond Iowa and New Hampshire to states like South Carolina and Nevada, with their heavily minority Democratic electorates.

Moreover, Sanders’ significant financial disadvantage to the Clinton juggernaut becomes all the more important once the voting and caucusing begins in more expensive media markets. Though Sanders raised an impressive $15 million in the second quarter of the year -- powered largely by an enthusiastic army of grass-roots supporters -- that still put him well behind the $60 million total raised by Clinton’s campaign ($45 million) and super PAC ($15 million). As befits his political profile, Sanders has no super PAC backing his candidacy.

Obama, on the other hand, went toe-to-toe with the Clinton fundraising operation from the moment he launched his improbable campaign. In the first quarter of 2007, Obama raked in a cool $25 million in campaign donations -- essentially tying Clinton, who raised $26 million. Absent such fundraising prowess, Obama would have gone down to defeat.

Then-Sen. Obama was able to compete with the Clinton cash machine because he enjoyed the support of a considerable chunk of the Democratic establishment -- business types, denizens of Hollywood and members of Congress. Sanders enjoys nothing of the sort; some Tinseltowners may be cheering him on, but the democratic socialist (shockingly!) lacks support in America’s C-suites, and he’s yet to win the endorsement of a single sitting member of Congress. If the going gets tougher and Sanders starts to chip at her heels, Clinton will be able to marshal the financial and organizational resources of the Democratic powers-that-be. The question will be put to voters, far more forcefully than it is now: Is Bernie the man on whom you want to bet Ruth Bader Ginsburg's seat?

Clinton can afford to lose an early state or two; Al Gore was the rare candidate to coast to a party’s open presidential nomination without losing a single primary or caucus. (And he was the sitting vice president; since the dawn of the modern primary process, no candidate who wasn’t the incumbent president or vice president has gone undefeated on the path to his party’s nod.) Sanders, however, has no such room for error. Without New Hampshire, he’s finished. He may need to win Iowa, too; it’s quite plausible that a convincing Clinton win there would diminish Sanders’ standing in New Hampshire. As of today, she’s on track for just such a win.

To be sure, the notion that Clinton might lose even one state seemed ludicrous just a few months ago. Couldn’t the contours of the campaign shift even further? It’s not unthinkable. But a few close polls in New Hampshire don’t upend the fundamental dynamics of the race.