Wait, what?! Nazi-themed romance novel about a "blond and blue-eyed Jewess" finding Christianity gets nominated for major industry award 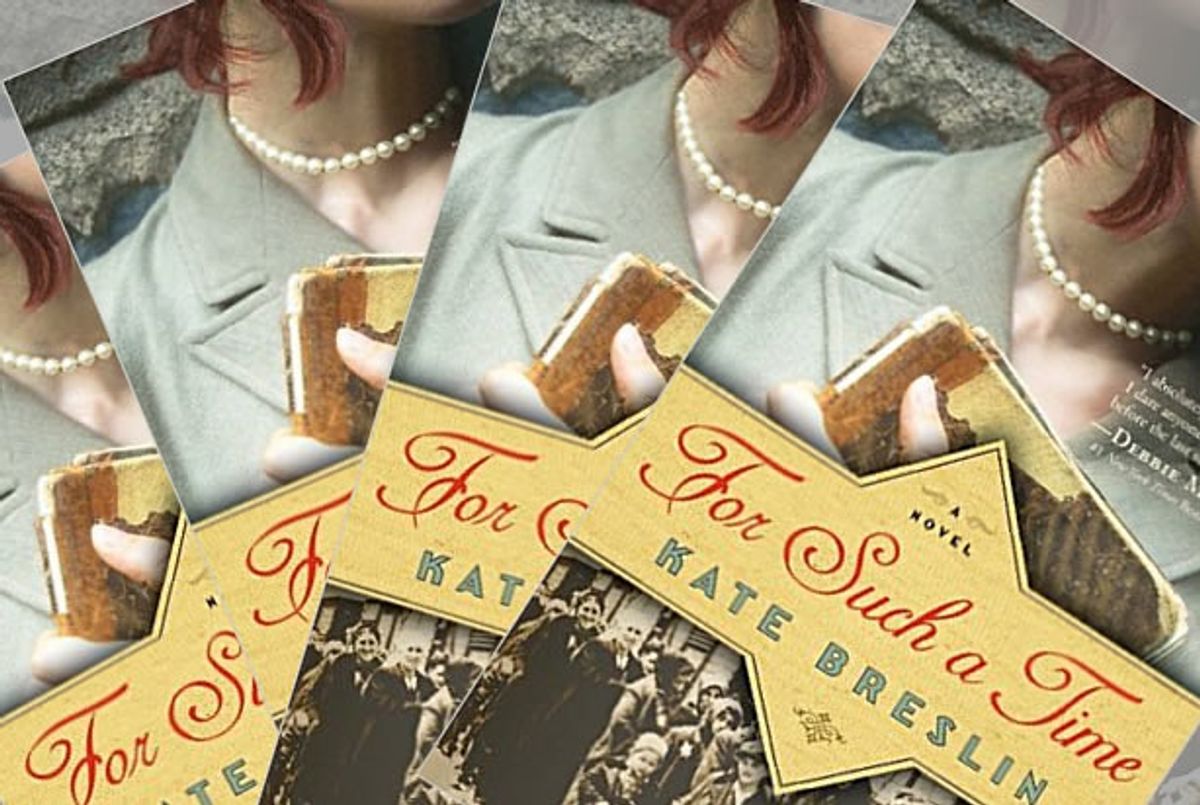 Quite a bit of condemnation is being heaped upon a romance novel that's been nominated for two of the genre's highest awards -- and rightly so, as Kate Breslin's "For Such a Time" is a re-imagining of the Book of Esther set during the height of Nazi-occupied Europe, and involves a redemptive love story between the SS officer who runs a concentration camp and a half-Jewish woman who owes him her life.

Conceptually, the book didn't need to be a disaster, as the Book of Esther does include the redemption of a morally suspect leader with the power to have Jews murdered at whim. Briefly, King Ahasuerus crowns Esther as his queen not knowing that she and the cousin who raised her, Mordecai, are Jewish. His prime minister, Haman, receives Ahasuerus' blessing to kill all the Jews in the Persian kingdom. Haman eventually learns Esther and Mordecai's true heritage and, offended by Mordecai's refusal to bow to him, sets in motion a plan to have him hanged on gallows built expressly for that purpose. In the end, Esther reveals her identity and Haman ends up swinging from the rope he'd tied for Mordecai.

In short, an indifferently anti-Semitic Ahasuerus is redeemed by the love of a good Jewish woman, while the virulently anti-Semitic Haman is executed in a most befitting manner. The problem with "For Such a Time" isn't that it rehearses this narrative with "a blonde and blue-eyed Jewess Hadassah Benjamin" and "SS-Kommandant Colonel Aric von Schmidt" playing Esther and Ahasuerus, but that in the words of Temple University's Josh Lukin, the book "retell[s] the story of Esther but make[s] Haman and Ahasuerus into a single guy" because "it'd be a neat twist!"

The offense isn't that Christian retailing's 2015 best-selling award winner appropriates a fundamentally Jewish story and airlifts it into the teeth of the Holocaust -- it's that it misunderstands the story it's appropriated on a very basic level. Ahasuerus is capable of redemption because of the relatively casual nature of his anti-Semitism, but he's not personally invested in the destruction of the Jewish people, unlike his underling Haman.

By collapsing those two characters into a single SS-Kommandant, Breslin conflates two crucially distinct questions -- "Can people who stand by while others do evil in their name be redeemed?" and "Are those who commit atrocities capable of redemption?" The former can be asked of the entire German population, after all, whereas the latter is limited to those who abandoned their humanity in the name of a failed ideology.

The novel could have survived such a flaw were it not for the fact that the genre to which it belongs isn't simply "romance," but "inspirational Christian romance," meaning that the reader is subjected to regular appearances by what Smart Bitches, Trashy Books' guest reviewer characterizes as a "magic Bible, New Testament and all, that seems to show up whenever the main character needs to see it most." Although the reviewer is quick to note that the story of Christ's sacrifice merely "supplements" Hassadah's Jewish faith, as any Jew who grew up in a predominantly Christian environment will tell you, this is the "Jerry Maguire" version of proselytizing, in which the New Testament stares deeply into the eyes of the Original and says, "you complete me."

And that is the book's most glaring offense -- not the suggestion that an SS officer who personally participated in the extermination of the Jewish people can be redeemed, but that a Jew caught in the awful whorls of history can't even survive unless her faith is supplemented by the Christian faith.