The GOP freakshow is upon us: Why tonight's Fox News debates could make "Lord of the Flies" look like a picnic

Christie. Huckabee. Cruz. TRUMP. If the names in tonight's main event are any indication, it's gonna be a bloodbath 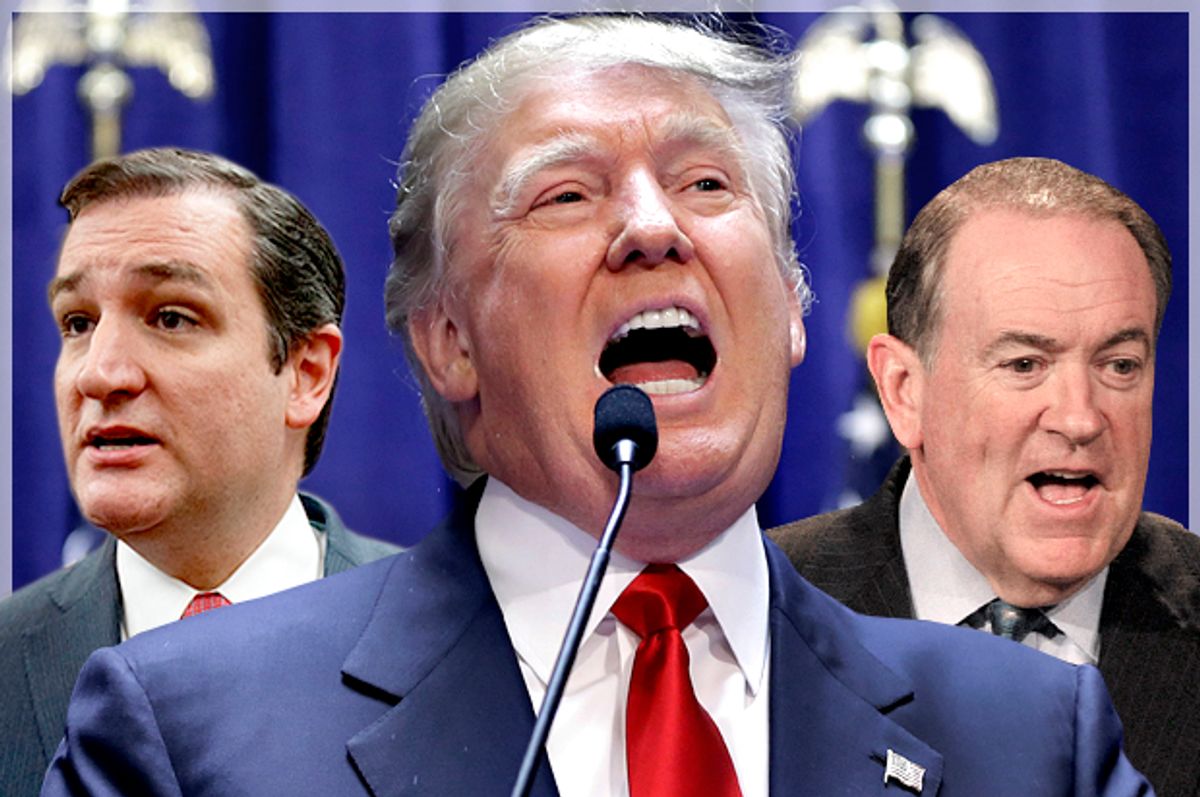 Politics is a serious business. It's about people's lives, their hopes, their dreams, their futures. It's about war and peace and the fate of the planet. It's wrong to treat it as a sporting event or a form of entertainment.

Tonight we are being treated to the one time in all of politics when it's perfectly acceptable, indeed required, to sit back with a cold one and just enjoy the political circus for its sheer entertainment value. Tonight begins the greatest show on earth: the Republican presidential primary debates. And this one is going to be a doozy, featuring as it does the most crowded clown car in Republican primary circus history.

Four years ago, it would have been hard to imagine a more ridiculous field of debaters. The GOP started the festivities even earlier that year -- the first Fox debate was in May -- with what everyone thought at the time was an excessively crowded field. (Little did we know.) Michele Bachmann, Newt Gingrich, Rick Perry and Jon Huntsman had not even declared yet and Mitt Romney declined the invitation. Only Herman Cain, Gary Johnson(!), Tim Pawlenty, Ron Paul and Rick Santorum debated that night.

It was the first of many cheerfully inebriated progressive Twitter parties all over the country, as Republicans had 20 primary debates between May of 2011 and February of 2012. It's amazing we didn't all end up with liver damage. It's hard to believe looking back on it, but Jon Hunstman appeared in 11 of those debates. Of course America was so riveted by the antics of Bachmann and Cain, the strange behavior of Rick Perry and the unsettling notion that Newt Gingrich and Rick Santorum were actual contenders that it's not surprising he simply didn't register.

Romney was the frontrunner from the beginning and he benefited from the contrast between him and the weirdos he was running against. His awkward, stiff, dull personality turned out to be an asset. One assumes that Jeb Bush and Scott Walker are hoping for a similar dynamic this time.

The GOP leadership was acutely aware that their primary season had been an embarrassing freak show and sought to exert more control over the process this time. They only scheduled nine debates and came up with extensive rules which are supposed to keep the proceedings dignified and statesmanlike. They had no idea that every single Republican who has ever looked in the mirror and saw a president looking back at them would decide this was their big chance. And who could have ever predicted that billionaires would flood the race with enough cash to entice nearly 20 different candidates to jump in. (It's probably safe to assume that Rupert Murdoch and Roger Ailes understood that. All that money's got to go somewhere, most of itt to media.)

It's such an embarrassment of riches (or just a plain old embarrassment) that Fox News had to create a junior varsity and varsity debate. As always, the JV team is disappointed. Rick Santorum's spokesman Matt Benyon was fit to be tied:

The idea that they have left out the runner-up for the 2012 nomination (Santorum), the former 4-term Governor of Texas (Perry), the Governor of Louisiana (Jindal), the first female Fortune 50 CEO (Fiorina), and the 3-term Senator from South Carolina (Graham) due to polling 7 months before a single vote is cast is preposterous.

And what about George Pataki and Jim Gilmore? Chopped liver?

Benyon's got a point, though. Just to lend some perspective to how meaningful all this early hype is, here's a little look back at the Washington Post's post-debate coverage of the June 13, 2012 debate in New Hampshire:

Bachmann showed stage presence and a flair for attracting attention to herself. She lacks the experience of Pawlenty, a two-term former governor, but she could become a real force in Iowa, the state Pawlenty knows he must win to be Romney’s chief challenger next year.

As you can see, the early polling and analysis isn't exactly predictive. Nonetheless, Fox News had to do something, and rather than split the debate neatly in two and have them draw straws, the network decided to put its thumb on the scales and try to create the illusion that the polling below the top handful of candidates actually means something.

And, of course, there's Trump, the clear front runner by a mile. It turns out that he's not just leading among the hardcore right:

Trump has widespread ideological backing from Republicans - as he gets the most support of any candidate from moderate, conservative and very conservative GOP primary voters.

Trump is leading in almost every major voting group within the primary electorate, but he is running particularly strong with white evangelicals (20 percent), men (24 percent), seniors (24 percent), and those with a high school education or less (26 percent).

He also leads among college grads, although, as with all the polls, it pays to remember that the rest of the votes are split among a huge group of candidates, so he's not quite the juggernaut that he appears. Still, there's a very large group of Republican voters who like his style.

This whole thing must be very hard on poor Rick Perry who just can't catch a break. And there is also a lesson in his sad performance for all the other candidates. He's the one guy who went all-in as the anti-Trump, calling him a "cancer on conservatism" saying  "Trumpism is a toxic mix of demagoguery and mean-spiritedness that will lead the Republican Party to perdition." There's no way of knowing if that gambit hurt him in the polls, but it's glaringly obvious that it didn't help. All the varsity players undoubtedly took note.

It's a very big team:

These are literally the best candidates that Republican billionaire money can buy. Think about that for a minute. And then have another drink.

Republican elites are undoubtedly praying that Trump makes a fool of himself by answering questions the way he's been answering them and everyone will finally see that he simply cannot be president. Good luck with that. If you can diss John McCain's war record and gain support in a GOP primary, it's fair to assume that these voters aren't interested in old fashioned concepts like dignity and respect.

Bret Baier, one of the moderators, said that he's been waking up in a cold sweat at night worried about what to do if The Donald refuses to play by the rules. (They claim they have a "secret plan" in case he goes off the rails -- but then so did the RNC after 2012 and we can see how well that worked out.) Baier isn't the only one who's losing sleep over the idea of trump failing to play by the rules. After all, Trump has made it quite clear that if he doesn't like the way he's being treated he's prepared to run as a third party. And he's got all the money he needs to do it.

The best the rest of us can hope for tonight is to see a full-blown smash-mouth confrontation between Christie and Trump and if Cruz, Kasich and Huckabee pile on it could be epic. It's hard to imagine how Walker, Bush, Paul and Rubio are going to survive in this "Lord of the Flies" test of macho will but it will be awfully fun to see them try.

Here's to the clown car's big opening night. Cheers, everybody!