We already know the GOP debate's big loser: Why Reince Priebus is in for more humiliation 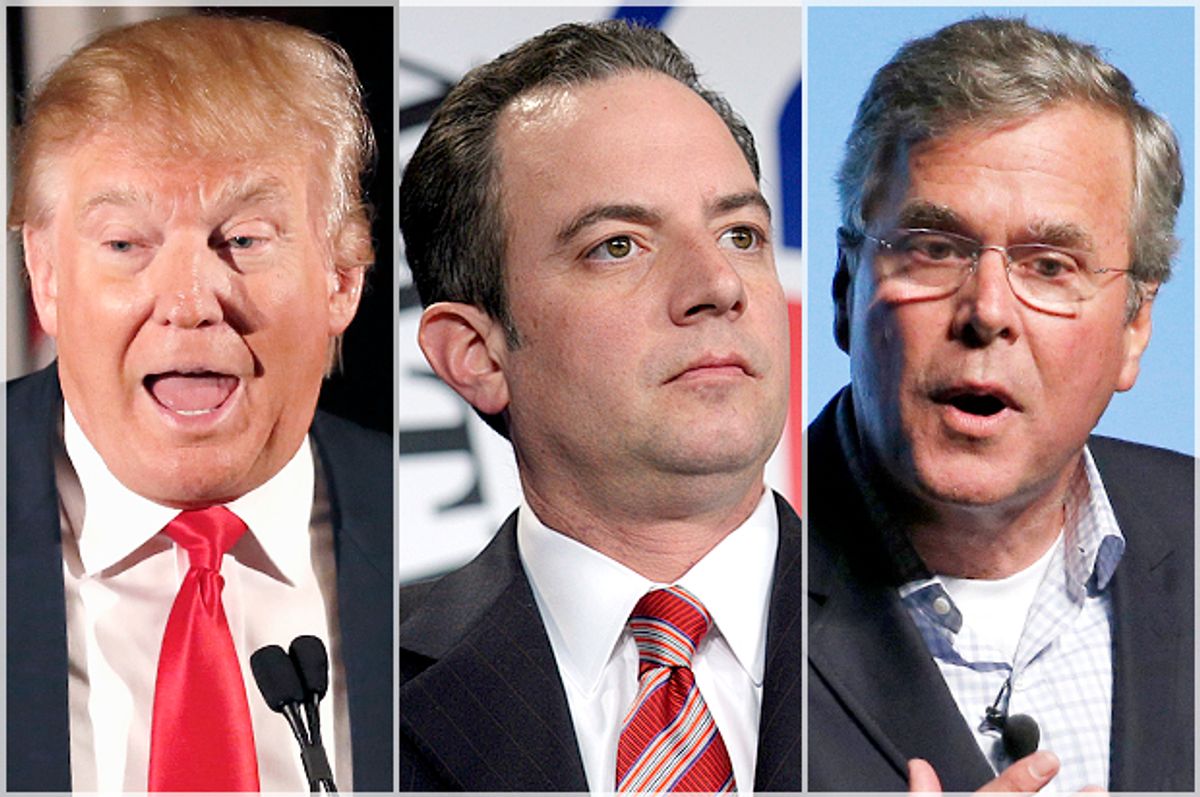 It’s a big day for the GOP, and Republican National Committee chair Reince Priebus has been all over the place talking about his high hopes for the party’s first presidential debate of 2016. He insists the 10 candidates who’ll take the stage in Cleveland tonight, topped by Donald Trump, won’t bash one another, because they’ll be attacking Hillary Clinton.

"That's really ... what the focus is. We're not going to focus on each other," he told NBC.

But the truth is, Reince Priebus has about as much control over what the GOP candidates say tonight as I do. Every effort he’s made to bring order and honor -- and possibly younger, non-white voters -- to the party has either failed or backfired, starting with his “autopsy” of Mitt Romney’s terrible 2012 campaign.

His one accomplishment was limiting the number of debates, desperately trying to avoid the Gong Show aspects of 2012, but there’s never been a goofier reality show than the 2016 campaign. Priebus now has an orange-haired carnival barker not merely MCing the festivities but as the party’s leading candidate.

On his big day, a slightly defensive Priebus rejected criticism that the party is unfairly participating in limiting the number of debate participants. “We’re not a staging organization,” Priebus told CNN. “We’re still putting on a production that people feel they can watch.”

It’s disingenuous for Priebus to deny his involvement in staging the debates. He bragged to radio host Hugh Hewitt in February that his most important achievement as RNC chair was “taking control of the presidential primary debate process” for 2016. His goal, he told Hewitt, was “creating a debate environment that would bring honor to the Republican Party, not a debate environment spurred on by nefarious actors like Chris Matthews and others.” So he cut out MSNBC entirely, and happily served up the first debate -- and at least two more -- to his friends at Fox. But their criteria for debate participation cut the field by seven – even though less than a point separated the last debate participant to make the cut – Ohio Gov. John Kasich – from loser Rick Perry. Fox also ignored a final poll that would have included Perry. The RNC could have objected, but didn’t.

In a debate that's supposed to "bring honor to the Republican Party," Fox’s rules will put Trump at the center of the stage, though Priebus is known to be concerned about what the nativist birther bully is doing to his party. The RNC chair called Trump’s racist comments about undocumented Mexican immigrants “not helpful,” and he famously called Trump to ask him to “tone it down” last month -- but it didn’t work. Now, the only three candidates who’ve seriously challenged Trump’s boorish behavior – Perry, Lindsey Graham and George Pataki – are left off the roster entirely.

The Fox-staged debate distorts the process in other ways. Voters won’t get to see a potentially enlightening foreign policy clash between the hawkish Graham and the supposed non-interventionist Rand Paul. And the field’s only woman, Carly Fiorina, is stuck at the kiddie table.

To recap: virtually everything Priebus has tried to do to help his party compete for the White House in 2016 has either been ignored, or has backfired. Making the rounds of TV news shows, taking a virtual victory lap, can’t obscure that. So have a seat, Reince, and enjoy the show. You're basically a spectator just like the rest of us.