In the religion of calling bullsh*t, Jon Stewart was both preacher and disciple: "If you smell something, say something" 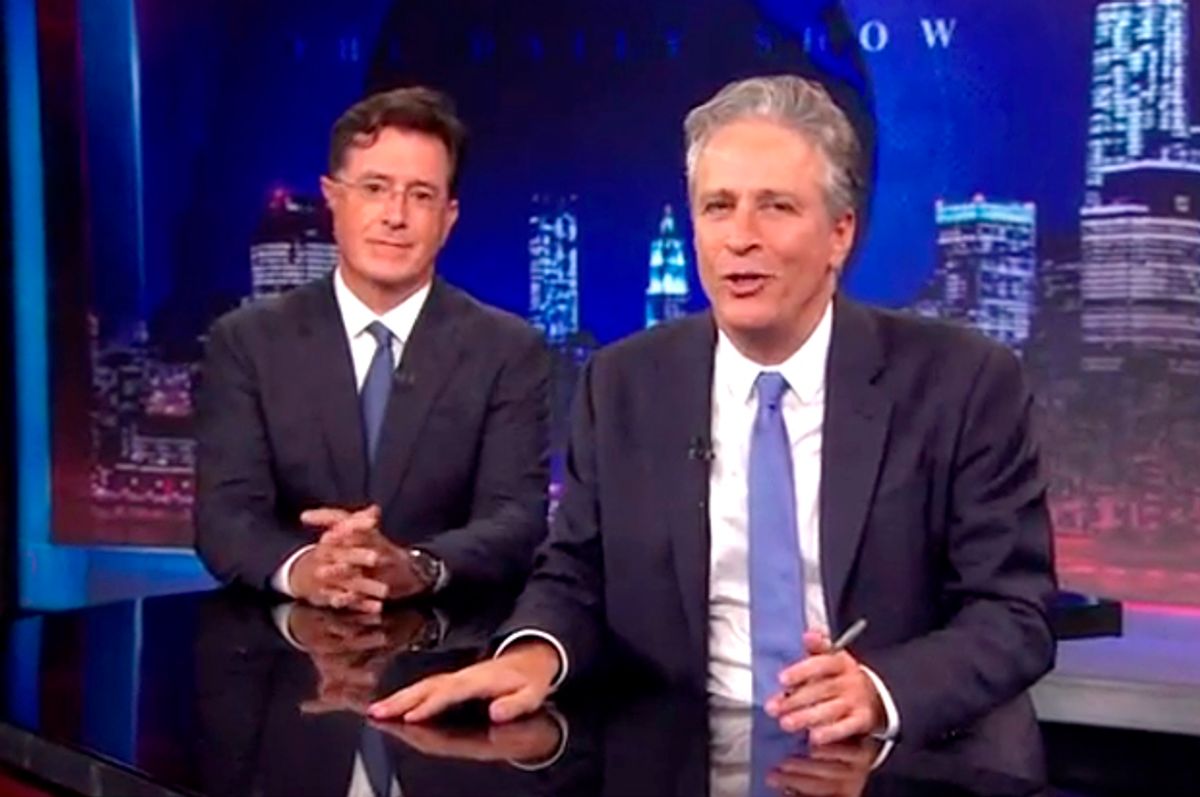 Jon Stewart is less a comedian and more a preacher-man. Hear me out; for his (and our) liberal base, even a metaphor approaching organized religion is hard to stomach. But politics is, for better or worse, a belief system, and we have needed, in the past 16 years, someone who could prompt us to continue to have faith. In his final episode as the anchor of “The Daily Show,” Jon Stewart told some jokes, yes. But mostly, he let his talented correspondents tell them, as he played the perpetual straight man. He laughed, he cried, he spoke from the heart. And at the end, instead of offering us our moment of Zen, he offered us his moment of Zen—Bruce Springsteen, as it turns out, singing “The Land Of Hopes And Dreams” and "Born to Run," backed by the E Street Band.

Planning the last day of a job or institution that has shaped your life, defined your career, created your legacy—it’s a lot like planning your own funeral, except you get to be there. Stewart chose what he wanted his legacy to be, and as he would, he chose heart over comedy, others over himself, gratitude over grandstanding. And in doing so, he forwarded along to his audience a set of values—not just political ones, but personal ones, too. Jon Stewart is a man in the business of inspiring others to be better than they are—and to be the best version of himself, in the process. He is a man in the life’s work of trying to make the world a better place. Maybe that comes through comedy, maybe that comes through art, maybe that comes through making a community for dozens of other comedians, from current stars Steve Carell and John Oliver to newcomers Jessica Williams and Trevor Noah. But sometimes that comes through actual sermons, and in the final act of “The Daily Show With Jon Stewart,” that is exactly what the audience got, in the form of a monologue on bullshit (transcribed roughly by Dave Itzkoff here).

I’m not calling it a sermon to diminish the import or to discredit its essential truth. Rather, I think over the past 16 years, Stewart has found a way to reclaim the concept for people like me—liberals who might not find a place for them in organized religion and lefties who reject the idea of top-down morality. Sometimes someone really does articulate what you believe about the world in a way that makes it possible to better understand it and better share it. Judging entirely by the outpouring of affection for Stewart in the months since he announced his departure from late-night, Stewart closed, quite beautifully, with this:

The good news is this. Bullshitters have gotten pretty lazy, and their work is easily detected. And looking for it is a kind of pleasant way to pass the time… So I say to you tonight, friends, the best defense against bullshit is vigilance. If you smell something, say something.

He delivered unto us the good news, and in the place of the devil, used the term bullshit. But it’s all the same. This is a person for whom values, clearly, are not a punchline (or political spin); a person who ruminates on the meaning of joy when talking about his family. Maybe his text is politics; his rituals, comedy; his vestments, American media—but the gospel, I think, is an old and universal one. Be honest. Be kind. Have faith. Say thank you.

That was the essential takeaway of last night’s finale, which eschewed the celebrity star power of David Letterman’s final “Late Show” and the absurdism of Stephen Colbert’s final “Colbert Report.” Stewart took the camera on a tour of “The Daily Show” offices, where everyone from the custodial staff to accounting had their moment in the sun. A collection of politicians and talking heads threw one last insult at him—ranging from the not-terribly-serious (“So long, jackass,” from Senator John McCain) to the probably completely serious (“I’m sure you’ll be missed, by somebody,” from Senator Lindsey Graham). References to Arby’s dotted the background. Craig Kilborn and Larry Wilmore dropped by. Trevor Noah came over to start measuring furniture for his new set. John Oliver, starting in on a monologue, asked quite earnestly, “What the fuck is a commercial?”—adroitly mocking and plugging “Last Week With John Oliver” at the same time.

Even Wyatt Cenac stopped by—and in one of the episode’s most perversely graceful moments, Stewart and Cenac allowed it to be awkward between them. Stewart’s cautious silence spoke volumes, as did Cenac’s overtures of camaraderie. Cenac’s comments on “WTF With Marc Maron” about his tumultuous history with Stewart made waves a few weeks ago—and without making too much of a to-do about it, both Stewart and Cenac appeared to acknowledge it and move past it. It was a masterclass in moving on; everyone looked the better for it (and Politico reports that the two hugged backstage during the commercial break).

And of course, every correspondent ever (seemingly, at least) returned for a quick cameo—Steve Carell, Rob Corddry, Samantha Bee, Olivia Munn, Oliver, and of course, Stephen Colbert. It was his moment with Stewart that was the most heartbreaking—a comedian that meets Stewart truly as an equal, one that can match his charisma and talent onstage, albeit in very different ways. Their extraordinary creative chemistry inspired Stewart to be the most comedic he ever was on his show—and the most sincere Colbert ever was on his. It was a partnership that brought out the best in each other.

Best of all, Colbert broke character to say thank you to Jon Stewart. Stewart said, “Please don’t do this,” but Colbert chased him around the desk with a swivel chair, amidst a lot of laughter. And as Colbert launched into his speech—mixing in “The Lord Of The Rings” trivia and American jingoism with a truly heartfelt thank-you—the man of the hour started to cry. “If you look at the talent that came through this door, it would have been hard to screw this up,” Stewart said. Colbert responded:

We owe you—because we learn from you, by example. How to do a show with intention, how to work with clarity, how to treat people with respect. You are infuriatingly good at your job! All of us who are lucky enough to work with you are better at our jobs because we watched you do yours, and we are better people for knowing you. … On behalf of all the people whose lives you’ve changed, thank you.

Colbert didn’t just speak for the cast and crew—he spoke for the audience, for the fans, for liberals, really, in this country and the world over. Maybe, just maybe, we have all learned something. Maybe it is not so silly, to be a good person—and to hope for a better future.