Twitter won the GOP debate: A fitting tribute to Jon Stewart, who made citizen-satirists of us all

When GOP freakshow and Stewart's final "Daily Show" converged on the same night, magic was bound to happen 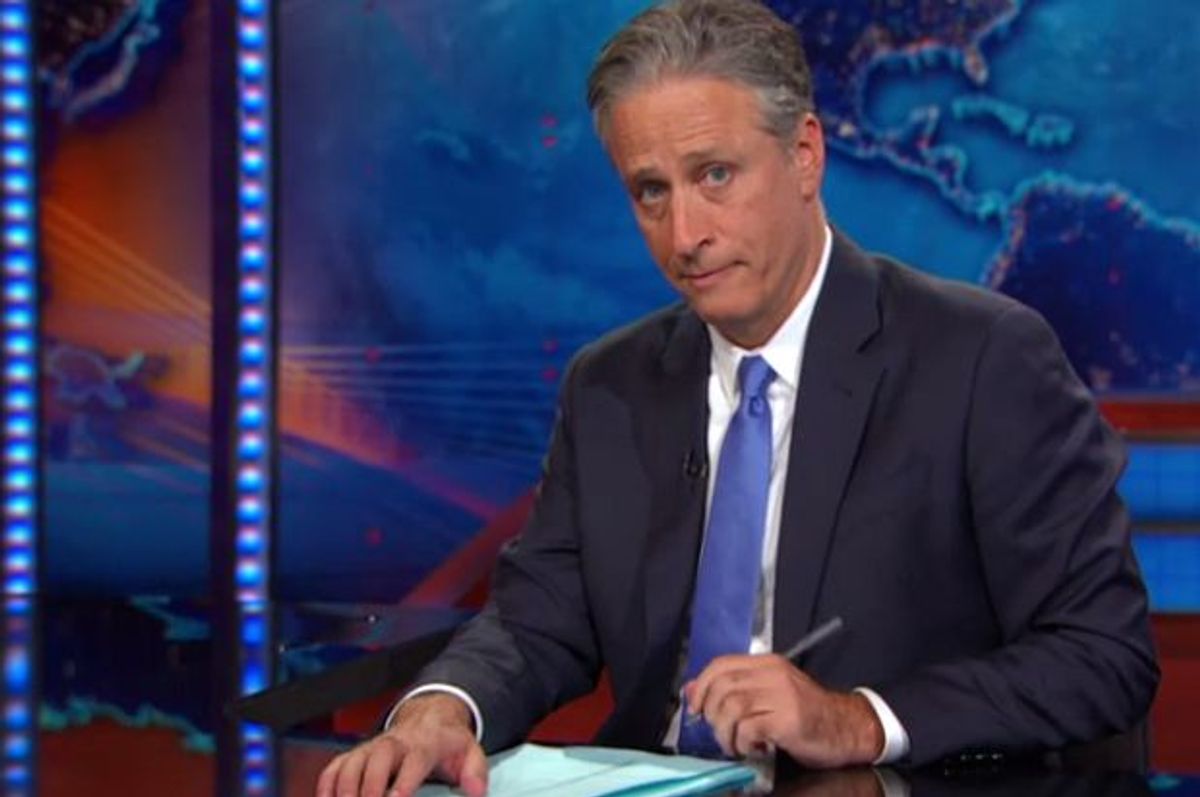 Planned or not, the synergy of the first GOP debates and the last episode of Jon Stewart as host of “The Daily Show” was bound to create a sense of loss. The final episode aired after the debates, but it was taped before.  So fans assumed that, even though they were going to have a last glimpse of Stewart as host, they weren’t going to benefit from his reaction to the two-ring circus.  But then, as we switched channels from Fox News to Comedy Central, we were given a moment of hope: Stewart started the show by telling us that he felt “an obligation to devote the entirety of the last show to our standard post-debate full team coverage.”  Yes, we thought, Stewart isn’t abandoning us after all.

Stewart then moved to his team of correspondents in Ohio, each of whom was covering a different GOP candidate. Jessica Williams was covering Bush, Hasan Minhaj had Scott Walker and Jordan Klepper had Trump.  Stewart then asked, “What are your impressions of tonight’s really interesting debate?” And then we all enjoyed a classic "Daily Show" moment of Zen. We knew that the bit had been taped before the debates, but the satire was still spot on.  The lesson? There are really no surprises.  We already get it.  Even without watching the circus, we can still satirize it, because it is predictably ridiculous.

That is why, as the bit morphed into an opportunity for virtually every single Daily Show correspondent to make a cameo and Stewart finally confessed that he wasn’t, after all, going to deal with the debate, that we learned our final lesson from Jon: The last show wasn’t about him. It was about the pack of professional comedians he mentored, the politicians he productively pestered, the staff that supported him, and the spirit of camaraderie he fostered. Even more, the last show reminded viewers that Stewart had spent more than sixteen years teaching his audience how to spot bullshit and entertainingly call it out.

One of the most poignant moments came when delivered his last monologue on the three main types of institutional bullshit. First, there is the bullshit that uses rhetoric to make something bad look good:

Patriot Act. Because 'Are you scared enough to let me look at all of your phone records' Act doesn’t sell. So whenever something's been titled 'Freedom,' 'Family,' 'Fairness,' 'Health', 'America,' take a good long sniff. Chances are it's been manufactured in a facility that may contain traces of bullshit.

Then there is the mountain of bullshit approach, were bad things are hidden behind piles of confusing and distracting blather. This is what happens when you sign for a credit card, open a Facebook account, get a mortgage, or — as he points out — draft legislation like Dodd-Frank.

And then there was type three:

And finally, it’s the bullshit of infinite possibility. These bullshit-ers cover their unwillingness to act under the guise of unending inquiry. “We can’t do anything because we don’t yet know everything.” We cannot take action on climate change until everyone in the world agrees gay marriage vaccines won’t cause our children to marry goats who are going to come for our guns.

This last one might best be described as the classic bait-and-switch bullshit where productive action is deferred and attention is distracted.

Stewart’s last lesson was smart, fun and sincere.  It also functioned like a primer for satire and was one of the best glimpses fans have been given into how Stewart decided on what to mock. Satirists go after folly, hubris and abuses of power. They thrive on pointing out false logic, faulty reasoning and sheer stupidity. Bullshit, though, is not just stupid, it is abusive and dangerous. Its goal is to bully others and cloud their judgment. As Stewart explains, “premeditated institutional bullshit is designed to obscure and distract.”

Satire is bullshit’s foil: both avoid being straightforward, but in completely opposite ways.  If bullshit deals in deception, manipulation and rhetorical flourish, then satire is all about irony, sarcasm and snark. Satire uses exaggeration, parody, ironic hyperbole, and puns to point out the lies and deceptions of bullshit. Bullshit wants to brainwash; satire wants to encourage critical thinking through smart humor.  Bullshit makes us dumber; satire makes us smarter. In fact, some would say that satire is the thinking person’s natural reaction to bullshit.

As Stewart was closing his speech on bullshit and many of us were already mourning the end of his tenure, the lesson turned to us:

Now, the good news is this: Bullshit-ers have gotten pretty lazy, and their work is easily detected. And looking for it is kind of a pleasant way to pass the time. Like an “I Spy” of bullshit. I say to you tonight, friends, the best defense against bullshit is vigilance. So if you smell something, say something.

And that is when it hit home. We already had. In the hours before Stewart’s last show the Twitterverse had lit up with an army of what I call citizen-satirists, who had been calling bullshit relentlessly during the two GOP debates. As I followed the Twitter feed for #GOPdebate it seemed to me that about ninety percent of all tweets on the debate were snark, sarcasm, satire or bullshit meters.

Some of the tweets were nothing more than direct quotes that stood as satire on their own. We had Trump say: “We need to build a wall. Maybe with a big beautiful door.” Huckabee gave us: “The purpose of the military is to kill people and break things.”

But there was much more.  Twitter users spun out memes, gifs, and all sorts of sharp snark. As Blavity points out, “when Donald Trump and Megyn Kelly are going at each other over Rosie O’Donnell, the jokes tend to write themselves.”  Salon writer Sophia Tesfaye covered how Twitter relentlessly mocked the GOP clown show in Cleveland. As Jessica Valenti exclaimed, the real winner of the debate was Twitter.

While it would have been great to watch Stewart mock Trump, Walker, Cruz, Bush, and the rest of the sideshow, the fact is the mocking had already happened. Professionals like Bill Maher and average citizens like Bipartisan Report, who has more than 167,000 followers, piled on the GOP debaters. Stewart may have been silent on it, but that doesn’t mean we didn’t have some excellent satire to console ourselves with as the clown car made its rounds.

So how to make sense of the fact that Stewart may well have been the best satirist in our nation’s history and that we may not need him anymore? Stephen Colbert nailed it, as usual, in a heartfelt moment when he forced Stewart to take some parting compliments: "We owe you because we learn from you. We learn from you, by example, how to do a show with intention, how to work with clarity, how to treat people with respect. You are infuriatingly good at your job."

That, of course, was the view from one of the many professional satirists Stewart mentored.  The fact is, though, that it's exactly what happened with Stewart’s fans too.  Stewart’s signature satire was about “paying it forward.” The idea was not just to mock, but also to teach a method.  In the end we can now see that Stewart’s whole plan was to render himself obsolete, because the best defense against bullshit is not one sage satirist, it is a public that gets it and does something about it. He reminded us that our best defense against bullshit isn’t him — it is us. As Stewart left his seat and Bruce Springsteen began to jam, there was no better ending to his tenure than to see Stewart and his team dance. The last show was not a tearful ending; it was a celebration.