50 years of creeping injustice: Inside the fight to save voting rights in America 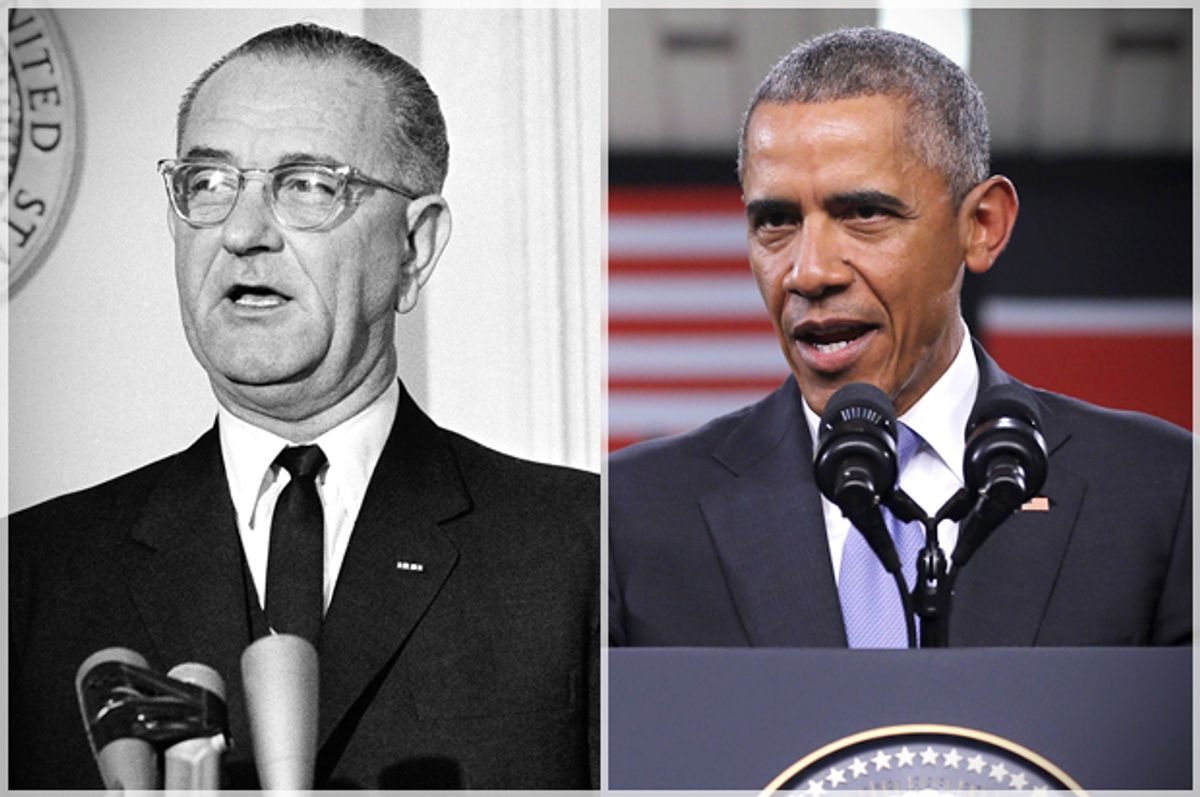 It’s election season yet again. As we gear up for another fourteen months of electoral drama, it’s a good time to return to the basics and take stock of our electoral process. This is a good week to do just that.

On Thursday night, the Republican Party held its first primary debate with several candidates vying for the GOP nomination for president of the United States. Thursday was also the anniversary of the passage of the Voting Rights Act of 1965. A week earlier was the two-year anniversary of the Supreme Court decision that gutted it. Alongside that anniversary, Sen. Pat Leahy (D-Vt.) and Rep. John Lewis (D-Ga.) introduced a bill to restore the provisions that were gutted.

Not so slowly, but surely, voting is becoming harder and harder to do for some citizens. As people of color and women gained the right to vote, the requirements and restrictions grew. In 1950, South Carolina began requesting identification from voters at the polls. That law didn’t specify that the identification document needed a photo ID — any document with the name of the voter would work. By 2000, 14 states had instituted voter ID laws. As of April 2015, 32 states have enforced voter ID laws. A non-partisan study determined these laws decrease voter turnout, beyond simply preventing voter fraud, and that black voters and young voters show disproportionate falloff in turnout. In fact, since 2011, a dozen Republican-led states passed strict voter ID requirements, some of which were blocked by courts, as was the case in Texas yesterday. Republican claims that such measures prevent fraud have been roundly dismissed as cover for instituting a modern-day poll tax that suppresses voting by low-income people, people of color and young people — all groups more likely to vote Democratic.

Prior to the Supreme Court’s ruling in Shelby County v. Holder in 2013, the Voting Rights Act required that certain jurisdictions — mostly former slave states, and places where discrimination has been an ongoing problem — “pre-clear” any changes to voting rules that might impact people of color. This system was in place for almost 50 years, without any notable voter fraud at all. And the burden of fairness was in the right place: on the states, who had to prove to their citizens that their laws and policies would not take away someone’s prerogative to cast a ballot as a citizen of the United States. Now all this is changing, and voter ID laws are the tip of the disenfranchisement iceberg.

In the United States, it’s becoming easier to buy an election than vote in it. Our wealthiest donors are able to spend more and more money to impact elections and the electoral process; the Citizens United ruling allows direct corporate spending in federal elections.

Meanwhile, as evidenced by a report finding that 75 percent of black men in Washington, D.C., can expect to go to prison or jail during their lifetime, and as Michelle Alexander meticulously documents in her groundbreaking book, "The New Jim Crow," the overtly racist policies of the past are being steadily replaced with policies that devastate communities of color in the here and now, and result in the highest incarceration rate in the world.

The incarceration rate is directly connected to the issue of voter suppression, given that 5.85 million American citizens, primarily people of color, are prevented from voting due to felony convictions. As of 2013, 7.7 percent of the adult African-American population, or one out of every 13, was disenfranchised.

The Constitution is actually quite clear about what it means to be a qualified voter: that an individual be an American citizen, at least 18 years old, a resident of the state in which they are voting, and registered there to vote. Yet voter turnout is the lowest it’s been since World War II.

It’s gotten so bad that we're forced to appeal to celebrities in order to gin up interest and enthusiasm for important civil rights issues. As the Houston City Council determined that city’s just-passed Equal Rights Ordinance would be subject to a vote on the November ballot, supporters of the anti-discrimination turned to hometown superstar Beyoncé to appeal for a signal boost that would driver voters to the polls in the fourth largest city in the U.S., where only a fraction of eligible voters are registered to vote.

In so many states, there is an electoral crisis, and it’s not voter fraud. It’s voter suppression, gerrymandering and felony disenfranchisement.

It doesn’t take much to understand the relatively recent interest in “suppressing voter fraud” by instituting a host of new voter ID laws across the country. The goal, and the impact, of these laws is to ensure that the wealthy have more than their proportionate share of electoral power. Such laws and policies are rooted in a radicalized anxiety about our country’s shifting demographics. They are taken from an old playbook, full of strategies to prevent African Americans, non-white immigrants, low-income people and young people from being able to impact law and policy. In other words, the real voter fraud being perpetrated against us is by those who want the American power structure to remain in the hands of a wealthy, white, few — even as our nation’s demographics shift. If these policies go unchecked, we will have to amend meaning of citizenship itself.