"That’s a message we men get in our society — that’s what heroes do": Kevin Bacon on the thrills of risk and danger 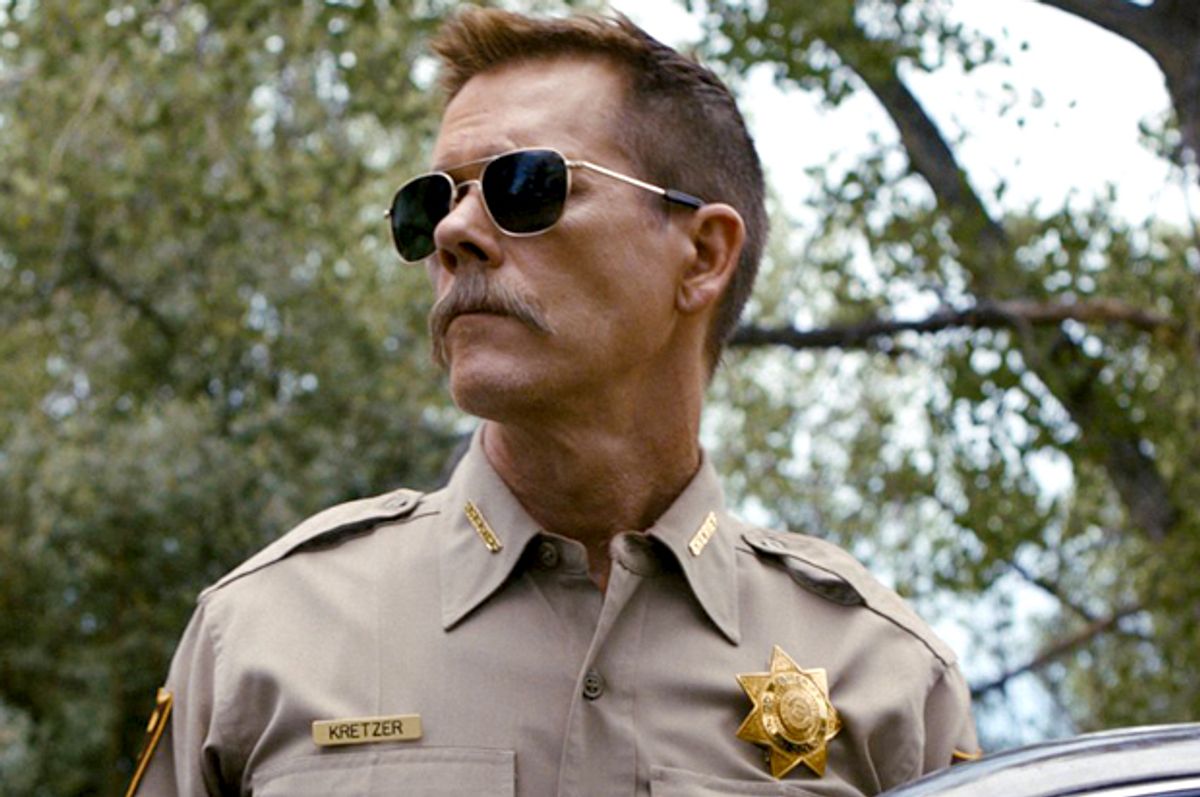 Bacon doesn’t speak much in the film, and his character’s behavior, which involves some questionable activities, lets the audience decide: Is Sheriff Kretzer doing good or is he up to no good? This is what is so great about Bacon as a performer: he can make a villain sympathetic (as he did in “The Woodsman”) or make a hero evil (as in “Hollow Man”). He does both in “Cop Car.” The actor, occasional director and part-time musician chatted with Salon about his childhood, his career and his new film.

What were you like as a kid? Do you have an anecdote about a dare that got you into the kind of trouble Travis and Harrison do in “Cop Car”?

Aaah… Travis and Harrison are having a life-altering, incredibly intense, once in a lifetime experience. I never had anything like that. I grew up in Philly. It’s not like I was going to find an abandoned Philly cop car in my frame of reference. But I grew up with danger—I would walk down the wrong street and get robbed. Or do things with bikes and skateboards—all kinds of dangerous things. We would shoot bent paperclips with rubberbands at each other’s heads. That was part of what being a boy is. We grew up being told to put ourselves in some kinds of danger, or at risk. That’s a message we men get in our society— that’s what heroes do. Video games, TV shows, movies—it’s the story we are being told again and again. I can relate to it.

You have played characters on both sides of the law in your career. Do you prefer being a cop or a criminal? Or playing a cop who may be a criminal?

There’s no preference for me. What’s more fun? The fun is acting. I get this gig where I get to pretend to be different people. I can be one person in September and someone else in October. It’s not that I think, “Now I’m on this side of the law.” It’s the difference between the characters that is interesting, fascinating, and seductive to me.

What experience, if any, have you had with the police in real life?

Little things, here and there… Nothing too extreme.

Playing Sheriff Kretzer has some real physical demands. I also like how you modulate his voice in the few cases when he does speak. Can you discuss playing the character, who is as tough as he is terse?

I approached the character like any other, and in this case, especially, I built a good, believable backstory, so that he is clear and specific. It lets the audience in without telling them too much. Seeing little pieces about what he’s doing, what he’s wearing, how he’s moving, walking through the universe. You form your own backstory as to why he ends up in this spot. That was the intention—to create ambiguity. I said to Jon Watts, “I’m feeling mysterious about who he is, and I don’t want to lose that.” I did not ask for, or want, a “Popeye” scene where I say, “I am what I am,” or explain why the character is this way. I wanted to make sure we were on the same page, both in how I played it and how Jon shot it, so it had validity to both of us.

What observations do you have about the violence in the film? There are some incredibly tense moments, especially involving the kids and gunplay.

It should be uncomfortable. I don’t think that Jon is out there to make some kind of statement about guns necessarily, but he’s creating a scene where we watch the transference of guns from toys to real things—and that’s a crucial moment. When I was a kid, we played army with guns and shot and killed each other. I’m not sure why that became part of our desire. I remember my mother was so anti-violence, anti-war, and anti-gun. She wouldn’t buy me a gun. I had to construct one. My friends had Johnny Eagles. I had to learn how to make the gun’s sounds with my mouth. [Bacon imitates gun noises, and admits he’s rusty at it] Jon Watts is certainly pointing to guns no longer being toys. People ask me about the safety of the kids, and being safe on the set is the number one job—more so than making a good movie. There are no excuses for being hurt. Everything was really carefully handled. Even if the guns are fake, they still have to be treated as if they are real.

You have made some classic Hollywood films, like “Footloose,” great ensemble films like “Diner,” and you were fantastic in the indie drama “The Woodsman.” You also have a nice little career directing. Do you have a career plan? How does a film like “Cop Car” fit into your career arc?

I wish I knew the arc! I wish I had a plan! It’s an oxymoron, career planning. I go from one job to another. Every once in a while Kyra and I stop and talk about it. It just doesn’t have that much reality. If something comes along and feels right, I’ll end up in Colorado Springs with tumbleweeds, two kids, and a cop car in a tiny movie. That’s a moment that happened in my life. It’s simply that I liked the script, the part, and I thought that Jon would do a good job. There is no great agenda. If someone gave me a big comic book movie or a sequel, I’d be down with that.

Kretzer has secrets. What’s something folks would be surprised to discover about you?

I like to decorate. I’m into home decoration. [pauses]… You don’t believe me?

No. I do. You actually said that with a fair amount of conviction.

That’s because I’m a good actor!