Born to riot: Why sports fans love to brawl, smash and set things on fire

Salon talks to author Justine Gubar about "Fanaticus: Mischief and Madness in the Modern Sports Fan" 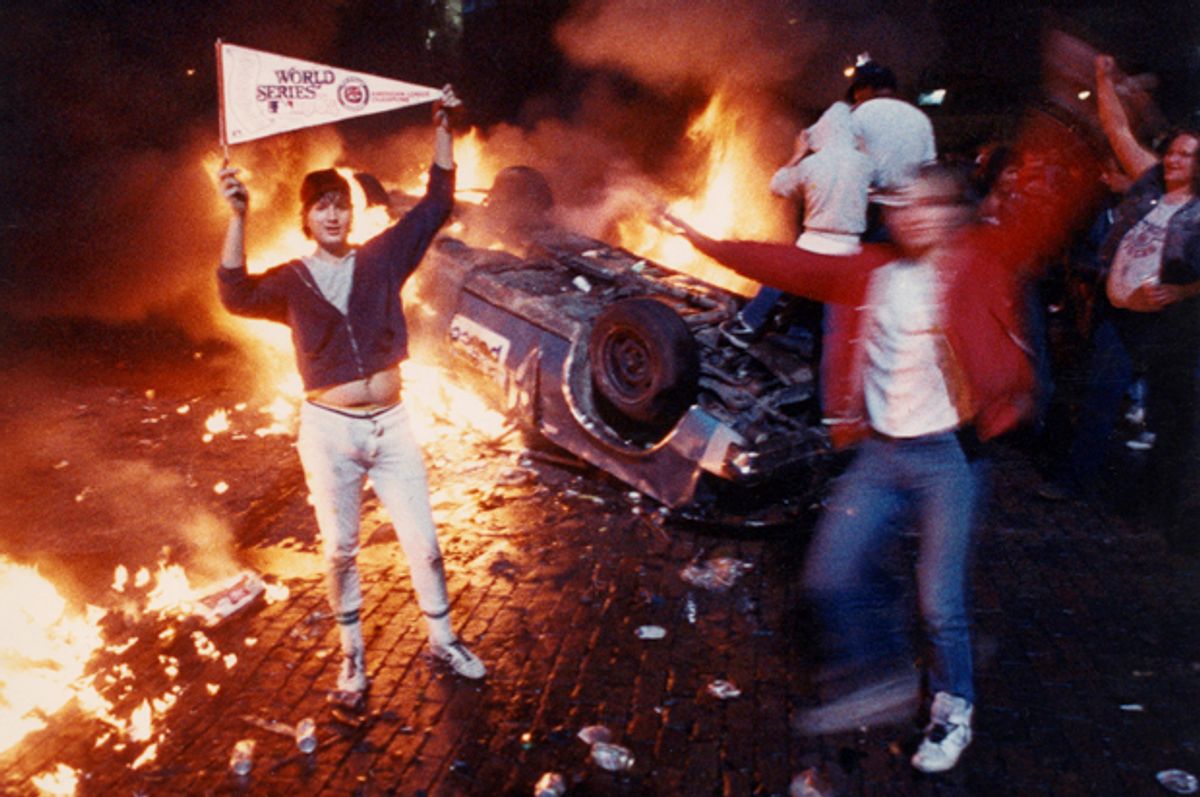 Back in the fall of 1983, me and my friend Jimmy snuck out to an Oakland A’s game. It was a school night and the A’s were terrible but we were both devout fans and the tickets were insanely cheap, something like six bucks apiece.

The game went into extra innings and we started worrying about getting home, so we watched the end of the game through a tall temporary chain-link fence that had been erected near one of the outfield exits.

We started shaking the fence as the A’s mounted a rally. By the time the winning run crossed the plate we were so jacked up that we pushed the fence over. It came down with a resounding crash. I don’t think we injured anyone, though I’m sure we did some damage to the stadium. But honestly: I don’t know for sure, because Jimmy and I immediately bolted. We didn’t stop running till we’d reached his car, in the far reaches of the parking lot.

I thought about this incident as I was reading Justine Gubar’s fascinating new book, "Fanaticus: Mischief and Madness in the Modern Sports Fan," because her central thesis is that “just about anyone can turn into a rioter.”

Gubar, mind you, isn’t some scold. She’s a lifetime fan — her father started taking her to Mets games when she was three — and a veteran producer for ESPN’s news magazine "Outside the Lines."

In writing "Fanaticus," she spent years interviewing academics, hooligans and sports journalists. She also drew on decades of experience as an investigative reporter and documentarian.

Her theories as to the origins of violent fan behavior are both ancient (tribal aggression, alcohol consumption) and modern (exorbitant ticket prices, the inflaming powers of the Internet). And the examples she cites range from gruesome to absurd.

Salon sat down with Gubar, who now lives in San Francisco, to talk about the dark side of fandom.

First things first. You’re a huge sports fan. So what got you started writing a book about rogue fans?

I experienced that excess firsthand. As a producer for ESPN, several years ago I was covering the Ohio State football team and fans didn’t like the stories that were being reported. The team was at a low point, beset by scandal. The head coach and star QB had left and fans were desperate and defensive. Their weapon, of course, was the Internet. I was harassed on Facebook and Twitter with nasty messages and threats. Someone published my home number online and I had to get a new one. It was ugly. And I started wondering about how passion for one’s favorite team could breed some bad behavior.

That seems like pretty devoted trolling, to not just criticize the network or the reporter, but to publish the phone number of segment’s producer. Looking back, what do you think was going through the mind of the fan who posted your number?

He probably thought he was defending his team. I wasn’t part of the Ohio State University tribe and he went into survival mode. Our brains are hardwired for tribal bonding and to defend against outsiders. A female journalist from out of state is low-hanging fruit when it comes to outsiders.

What’s the most surprising thing you learned about fan culture writing the book?

That bad fan behavior has been going on since the dawn of sport. Ancient Greeks banned wine from certain events in order to get people to behave. In Fourth century Rome, chariot racing fans trash talked rival charioteers, memorializing their sentiments in metal curse tablets.

I’m going to assume that those metal curse tablets were made by men because nearly every example of bad fan behavior in your book is perpetrated by men. At a certain point, do you ever feel like a lot of this crap just boils down to sports as an enabler for juvenile macho behavior?

Well, I can tell you what the research says, which is that bad sports fans are generally male. When hockey fans rioted after Vancouver lost in Game Seven of the Stanley Cup in 2011, 89 percent of the out-of-control crowd was male.

In "Fanaticus," I talk with the anthropologist who came up with the term “male bonding.” He says men are actually more hardwired for aggressive fandom. In the past, men would bond over the hunting and the killing of animals for food. There’s no need to kill for sustenance anymore. But men remain hardwired to bond and sports is a realm where they can retreat.

That said, I also interview a female hooligan from Germany who spent her childhood soaking up the violence of guys who spent every weekend beating "the shit out of each other.” I’ve heard one riot expert claim that more women get in fistfights at games these days than men. I think that’s a testament to YouTube and Vine and the viral nature of fan misbehavior. For me, stupid is an equal opportunity attitude.

Still, you’ve spent years at ESPN. What it's like for you as a woman to work at a high level in the sports media? Do you ever feel like you’re on foreign soil, so to speak?

I’ve had my share of bad post-game locker room experiences. I was hazed by a male newspaper reporter, for example, who directed me to exit an NBA locker room through the area where players were showering. I’ve also had football players in the both the pros and college convey to me that I wasn’t welcome in their locker room because I was female. My response was to put my head down and continue to do my job.

I also had a boss who once basically admitted to me that I got certain assignments (involving nights, weekends etc.) because I wasn’t married and didn’t have kids. That’s not a legitimate workplace policy.

When I first started working at ESPN, there were fewer women in all roles in sports television. Mentorship was minimal. Now there are more women in the workplace in all areas of the company and there are also more female fans. The NFL says 45 percent of its fans are women. The NBA says about 30 percent of its fan base is female.

We are also seeing more women in management roles. The Arizona Cardinals just hired Jen Welter to be the first female coach in the NFL, at least for the preseason. The San Antonio Spurs brought in Becky Hammon last year to serve as an assistant coach. The Sacramento Kings added basketball great Nancy Lieberman to their coaching staff this week. The Executive Director of the NBA Player’s Association is a woman. It’s not a perfect environment but what is? These recent strides are absolutely encouraging.

You end the book with a revealing anecdote, in which you mention that the radio host in Columbus, Ohio, who riled up Ohio State fans against you was fired, but quickly hired by another station. It seems in keeping with the law of the jungle when it comes to sports. (Basically, winning and money are the only two incentives that matter.) You yourself write that you don't think new security measures will reduce fan violence. Has that complicated your own feelings about being a fan? Contributing to the larger system that seems to bring out the worst in people?

Fandom is in my DNA, so my love for sports will never disappear. That said, my fandom has dissipated a bit over the years. Moving across country didn’t help. I’ve also spent too many games worried not about who was going to win but worried whether a game would go into overtime or extra innings and if I would miss my flight home. Maybe it’s like working in an ice cream store. Eventually you can lose your taste for ice cream.

As for contributing to a system that brings out the worst in people, I believe that by leading a discussion about knucklehead fans, the sports world might become a better place. There’s a cultural piece of bad fandom that needs to be addressed at a root level. Doesn’t change start with pointing out the problems? "Fanaticus" is my effort to address a taboo topic. Not a lot of people in the sports world want to call out paying customers for acting like jerks. There’s real discomfort in confronting how widespread the bad behavior can be, and a rush to blame any idiocy on “outsiders” rather than regular sports fans.