Donald Trump's incoherent, megalomaniacal religion: Why his courting of evangelicals reveals the depths of his ignorance

As Trump's campaign for the Republican nomination lumbers on, it behooves us to consider his (feigned) faith 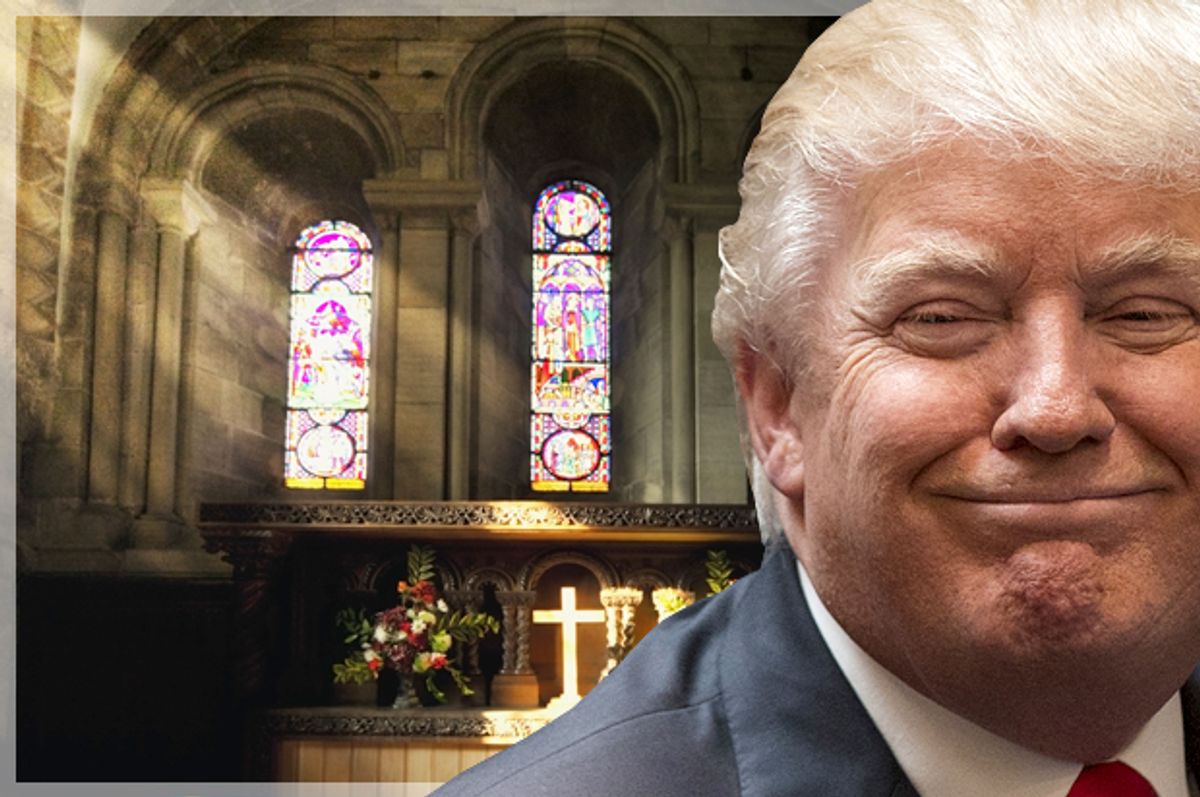 The Donald Trump candidacy confronts us with the atrocious spectacle of an oft-incoherent megalomaniac billionaire vaunting his loyalty to a contemptible yet hallowed ideology based on wishful thinking, preposterous ancient myths, and servitude to a make-believe celestial tyrant who, if he did exist, would rival said billionaire in incoherence and megalomania, and, of course, vastly exceed him in wealth. Donald Trump owns a fortune, to be sure. But the Lord, were He real, would own Donald Trump – and for all eternity.

At the same Family Leadership Summit in Iowa at which he recently called John McCain a “loser” (but a loser whose 2008 presidential campaign he then and there boasted of having helped finance), Trump reminded us of his resurgent religious sensibilities, if in an oddly offhanded sort of way. When the moderator asked him if he had ever sought the Lord’s pardon for anything, Trump replied: "I am not sure I have. I just go on and try to do a better job from there. I don't think so. I don't bring God into that picture."

Trump added that, as a Presbyterian, he does take communion, which he construed as tantamount to petitioning the Godhead for absolution:

"When I drink my little wine -- which is about the only wine I drink -- and have my little cracker, I guess that is a form of asking for forgiveness, and I do that as often as possible because I feel cleansed. I think in terms of 'let's go on and let's make it right.'"

It can be safely said that Trump does not appear to suffer from a faith-tortured conscience, and thus hardly seems to need whatever “cleansing” such a superstitious ritual might confer. Still less could we imagine him humbly genuflecting before the altar, debasing himself with whispered entreaties to a bogus heavenly ogre whose aid he has certainly done well enough without. Such frequently lauded Christian “humility” becomes no one, but, rather, is symptomatic of late-stage faith-derangement syndrome. Trump is anything but humble in this or any other way, and for all his flaws, cannot qualify as fully faith-deranged.

However, he did know his audience. The Family Leadership Summit brings together a bevy of sponsoring institutions that thrive off the munificent gullibility of the faith-befuddled and do all they can to promote ignorance and social regress. They include Jerry Falwell’s Liberty University, hellbent on turning out cadres of young men and women ready to re-impose Dark-Age morality on a country beginning to awaken from religion’s deep sleep of unreason; the National Organization for Marriage (which opposes same-sex unions); and the Family Research Council, former stronghold of that exemplar of Christian probity, the self-professed serial abuser Josh Duggar. Such are people one might as well spout religious nonsense to, as Trump did, and with no regret. It’s not as if they expect, or deserve, anything else.

Yet the unholy grail of “insight” (such as it is) into the Donald’s faith is actually an interview he gave the Christian Broadcasting Network’s “The Brody File” in 2011.

“I believe in God,” Trump told host David Brody. “I am Christian . . . the Bible is certainly one of, if not, I mean, it is the book, it is the thing . . . I’m a Protestant, I’m a Presbyterian . . . I think religion is a wonderful thing. I think my religion is a wonderful religion.” Thus he professed a talismanic reverence for what Thomas Paine called “a history of wickedness that has served to corrupt and brutalize mankind,” the book that taught mankind “cruelty, rapine and murder” – that is, the Bible. “There is no way I would ever do anything negative to a Bible . . . I would have a fear of doing something other than very positive.” He added that he goes to church “always, as much as I can, always on Easter, always when there’s a major occasion . . . I’m a Sunday church person.”

Brody voiced surprise to Trump that evangelical leaders – specifically (scandal-plagued) Ralph Reed and Tony Perkins – were intrigued by the possibility of his running for president. No surprise there, really: Both men rely on the willingness of the faith-addled -- and those magnates, like Trump, who pander to them – to fund their organizations, the (faux-religious, actually political) Christian Coalition of America and the (recognized anti-gay hate-group) Family Research Council, respectively. Trump found nothing unusual there: They wanted a winner, one who could “get Barack Obama out.”

(Of course, Trump subsequently chose not to run, and so did not “get Barack Obama out.”)

Trump also claimed to oppose abortion (after having been pro-choice), and subjected Brody to a rambling story about a friend and his first-unwanted, then-beloved baby – his justification for becoming “pro-life.” (He would tell the same story at last Thursday's GOP debate.) He did not, however, drag religion into his alleged change of heart – a good thing, in my view.

On same-sex marriage, Trump announced that “there can be no discrimination against gays,” and then, straightaway, without blinking an eye, contradicted himself, saying that “I’m against gay marriage, although I’ve taken a lot of heat for that . . . I don’t consider it wonderful, I don’t consider it good, bad, or indifferent, but I am against gay marriage.” He freely fessed up to his own failed marriages, but, despite Brody’s prodding, offered no Christian remorse. He said that he had just worked too hard to have a successful married life.

Brody then segued into Islam and whether Trump had problems with “some of the teachings of the Quran.” Amazingly, Trump admitted he was “certainly not an expert, to put it mildly, but there’s something there that teaches some very negative vibe. I mean, things that are happening, when you look at people blowing up all over the streets of some of the countries over in the Middle East . . . there’s a lot of hatred there someplace. Now I don’t know if that’s from the Quran. I don’t know if that’s from, you know, someplace else.”

Brody devoted an entire half-hour show to Trump, but much of it consists of filler analysis and an interview with a pollster. Clearly, the Donald just had little to say about religion.

Try as he might to feign symptoms, Trump fails to convince that he’s really suffering from faith-derangement syndrome; he certainly exhibits no particular reverence for God, whom he might, one assumes, consider an equal. Christianity just seems to be one more thing he doesn’t really think much about, if he does have to wax religious for electoral purposes.

Yet we cannot trust him. After Pamela Geller held her “Draw Muhammad” contest in Texas last May (and was almost assassinated for it), Trump spoke on Fox & Friends and accused her of “just taunting everybody. What is she doing drawing Muhammad? . . . It’s disgusting what happened and everything else. But why are they doing [sic] drawing Muhammad. Isn’t there something else they can draw?”

Now this is incoherence of the highest order, the burbling verbal eructation of a man who does not understand the issues with which faith – accepting the truth of propositions advanced without evidence – presents us; namely, that people motivated by religious belief often do absurd things, including murdering artists for drawing cartoons. Whatever one thinks of Geller’s contest, she had every right to hold it without fear of violence.

(Watch the clip and note that another famed “man of faith” joins Trump in condemning her, proving that exponents of nonsensical ancient dogma cannot be counted on to take just positions, no matter how clear-cut the case.)

If Trump had previously adopted Islam, one could understand his harsh stance against depictions of the Prophet Muhammad, but obviously this isn’t the case. Moreover, in January, he had tweeted “condolences and prayers to the victims of the [Charlie Hebdo] terrorist attack in Paris,” even if he did go on to attribute the massacre to France’s strict gun control laws. So, Trump humanely sides with the victims of faith-actuated terrorism one day, but denounces the near-victim of such violence the next. Such incoherence staggers the mind and fatigues anyone trying to make sense of him.

Journalists will confront Trump on the campaign trail and, because of outmoded, religion-averse notions of politesse, not grill him about why he believes, or purports to believe, in the supernatural. They will thus end up assisting the faith-deranged in preserving their cherished querencia – in front of the microphones and cameras of our nation.

The mostly silent, but relentlessly growing, community of rationalists will be left alienated and shaking their heads.

But time, trends, and the truth are on our side.