Meet Ronda Rousey: The greatest fighter in the world — and just the badass America needed

Ronda Rousey isn't just the best fighter in the U.S. -- she's also far and away it's most popular. Here's why 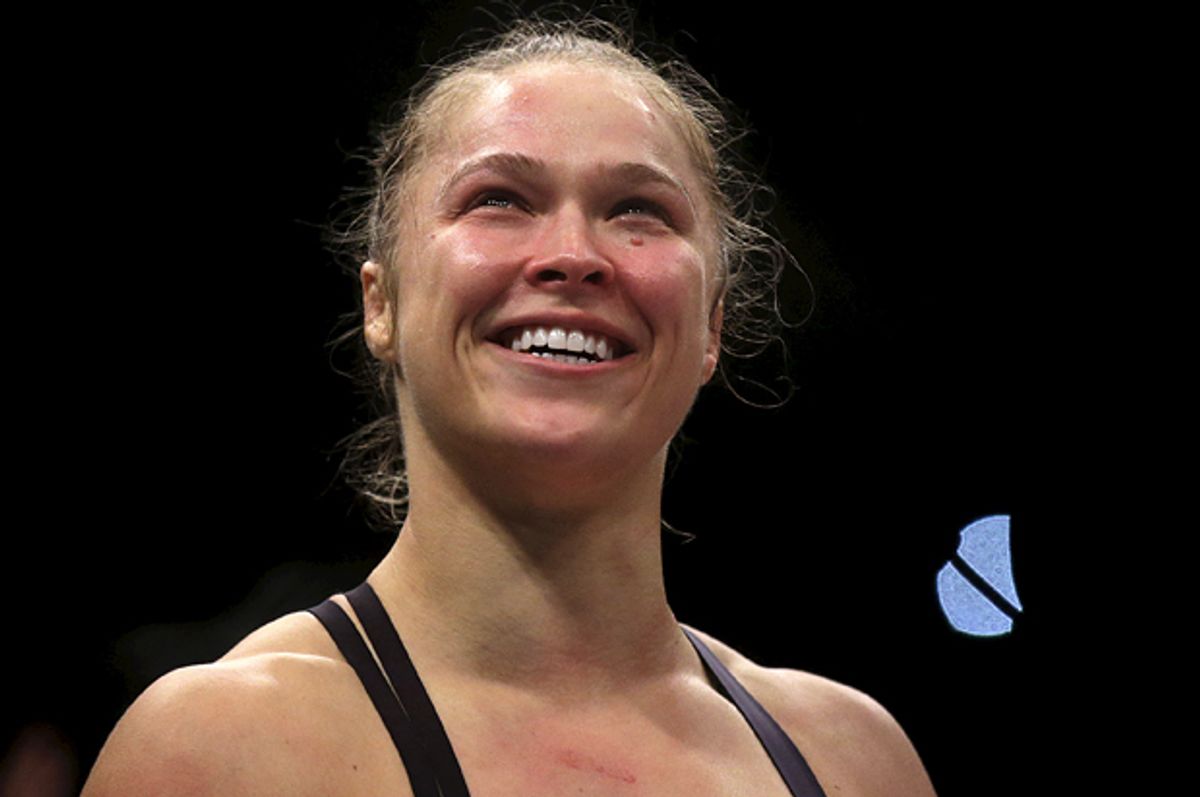 Is the greatest fighter on the planet a woman? Ronda Rousey, likely the best pound-for-pound fighter in the UFC, can credibly make that claim.

The undefeated champ doesn’t just beat opponents, she humiliates them in a matter of seconds: Her domination of Cat Zingano earlier this year, requiring a mere 14 seconds, fits tidily into a GIF; the same is true of her previous annihilation of Alexis Davis, a brutal KO that took all of 16 seconds.

Prior to her bout last Saturday, Rousey suggested a novel approach, promising to punish opponent Bethe Correia -- to "drag [the fight] out and make the finish just a little bit more thorough" -- after Correia made an insensitive comment in a pre-match interview seeming to reference the suicide of Rousey’s father.

The fight lasted a full 34 seconds before Correia was sent to the mat in an unconscious heap.

Which is to say that quick finishes are what Rousey does. And fans still line up in droves to pay the $60 pay-per-view price -- to watch a fight almost certain to end within a minute. UFC president Dana White predicts that in the final tabulation, last Saturday's event, UFC 190, will outdo the company's previous pay-per-view, which was the highest grossing fight card in the history of the one of the fastest growing sports in the world.

White, who as late as 2011 had vowed that women would “never” fight in the world’s premier mixed martial arts league, now calls Rousey “the best in the world and the best female fighter ever.” She is a superstar among superstars. Celebrities like Chris Pratt and Lil Wayne took to Twitter Saturday night to extol her. She’s even more popular among the world’s greatest athletes: Kobe Bryant, Lebron James, Aaron Rodgers, and many more besides, were positively effusive in the build-up to the fight, and even more so later, when she had once again proved her dominance.

It was none other than Mike Tyson who said of Rousey last month: “I think of myself when I watch her.”

Tyson’s own form of pugilism, boxing, is widely considered dead. In May, Manny Pacquiao and Floyd Mayweather, the last remaining Tyson-like superstars of the ring, delivered a disappointing fight to the millions who’d tuned in hoping for an 11th-hour renaissance for the sport. The so-called “Fight of the Century” was billed as the event that would finally "jolt the flatlining sport of boxing back to life." But Pacquiao and Floyd, at ages 36 and 38, are fighters already past their prime, and there's scant evidence that any new stars will emerge in their wake.

Thus, the mixed martial arts popularized by UFC over the past two decades seems poised to eclipse boxing once and for all. “Boxing is dead and Mayweather-Pacquiao killed it,” proclaimed the USA Today.

The Mayweather-Pacquiao fight went the full 12 rounds. One would think that justified the $100 price tag for the PPV buy. But fans were almost universally disappointed. By contrast, Ronda Rousey’s blink-and-you'll-miss-it bouts are over before the popcorn’s done popping -- and people love it.

Rousey is the undisputed star of the UFC, the one to bring the sport to a wider audience. Dana White predicts that an eventual matchup between Rousey and Brazilian fighter Cris Justino would shatter viewership records and approach the numbers garnered by big-time boxing fights.

This summer has marked perhaps the greatest moment for female athletes in American history. Last month’s Wimbledon victory for Serena Williams solidified her place as the most dominant currently active tennis player in the world, male or female, and perhaps the greatest of all time. Just days earlier, the U.S. women’s soccer team captured yet another World Cup title, nearly doubling the audience tuning in to watch the men’s team’s World Cup matches in 2014, and coming just shy of the viewership for this year’s March Madness championship. Hope Solo, Abby Wambach and Mia Hamm are household names; it’s pretty safe to say that American soccer is a sport dominated by women. No disrespect, but the men’s soccer team is just the scrappy little brothers of the superstars America loves.

But there’s clearly something different about Rousey’s superstardom. She’s a fighter. And she’s a fighter in a new, ascending sport bloodier and more dangerous than its progenitor. Her thrilling victory over Alexis Davis was accomplished with a slam to the ground and a series of 9 brutal rapid-fire punches to her opponent’s head, renering Davis unconscious and writhing abjectly around on the mat -- unaware of her surroundings and unable control her muscles.

With victories like that, Rousey hasn't just vanquished opponents; she’s also defeating the sort of paternalism that’s kept women away from a multitude of endeavors deemed the purview of men. Whether it’s playing in the mud as girls, or running for president as women, America has rules for the “fairer” half of the population. Women have been considered soft, precious, and delicate beings, good for doilies and lace, not the chainlink metal of a UFC cage, with all of the accompanying sweat and muscle and blood.

We shouldn't forget that it took patriarchal America a full 50 years to grant universal suffrage to women after the right was given to freed male slaves, considered little more than beasts by millions of Americans at the time. What then did they think of women? That the softness attributed to women was also a softness of mind, a weakness of judgment -- an untrustworthiness, in other words.

That gentleness imposed on women is nothing less than subjugation. Our other national oppression, racism, is now coded, and the violence and institutional barriers that keep Black Americans in precarity is maintained beneath a discourse of ever-proliferating synonyms for the former words in which the power relationship was crystallized and articulated. Women, too, have been kept away from power by means that rarely explicitly name the woman as lesser. That ornate lexicon of repression, perfected over the ages, even operates by irony: A wife can be called a man’s “better half” when everything else about the expectations of the culture, and in the marriage itself, says otherwise.

Rousey is not gentle, not in the ring. But she can be: She’s a "big crier," both strong and vulnerable -- like we all are. She can be glamorous, funny and witty in between bloodying up her opponents. All of which is to say that she's a full person, and she demands to be understood as such. She's not bound by old rules, and she requires to be understood in her completeness.

This is where we are now, as much as conservative politicians on the campaign trail rally support with their normative gender roles and notions of sexuality. Same-sex marriage is the law of the land, Caitlyn Jenner is asserting her identity, and the greatest fighter going right now is a woman. Gov. Mike Huckabee, the leading social conservative candidate, still relies on notions of women from the mid-20th century. Dr. Ben Carson, the leading social conservative in Iowa polling, traces all manner of social ills, including police violence against black Americans, to “the women’s lib movement” of the 1960s, a common refrain in conservatism.

Rousey is fighting against these voices as well.