Black Lives Matter is shaking up the Bernie Sanders campaign: How he's taking the critique seriously 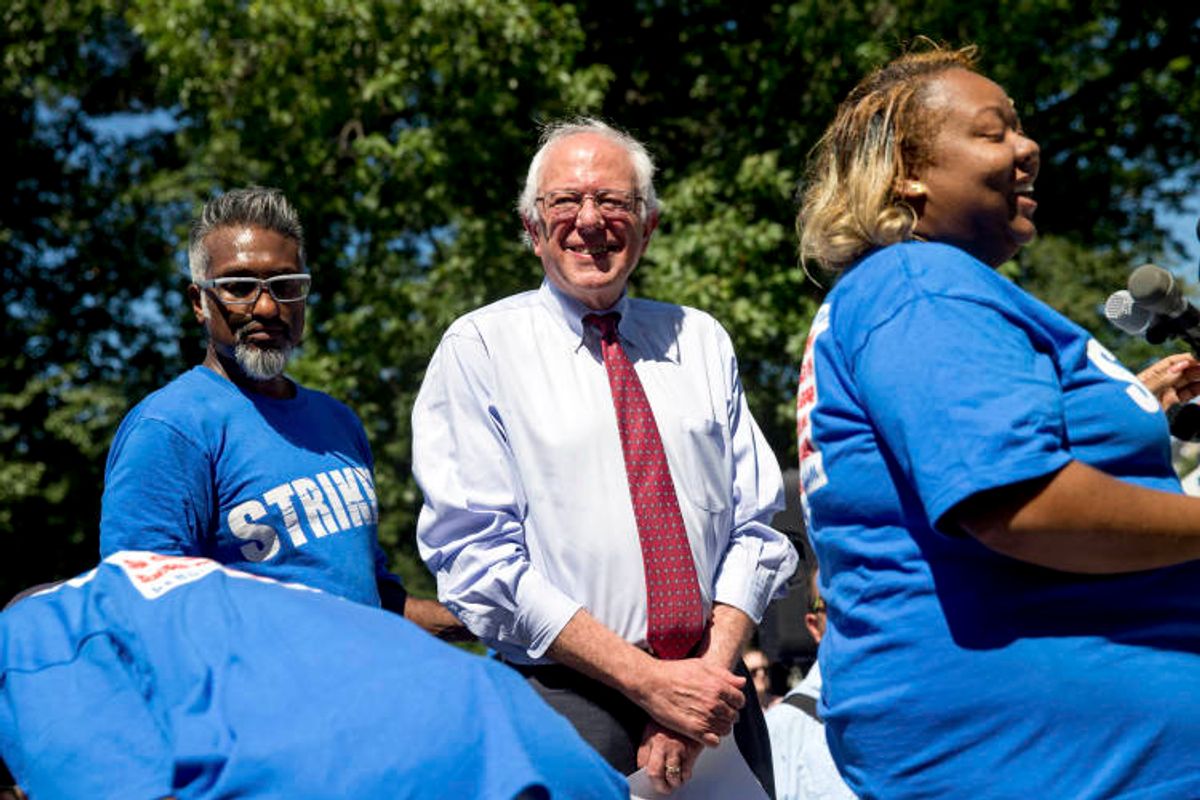 Democratic presidential candidate Sen. Bernie Sanders, I-Vt., center, joins federal contract workers to speak during a rally on Capitol Hill in Washington, Wednesday, July 22, 2015, to push for a raise to the minimum wage to $15 an hour. (AP Photo/Andrew Harnik) (AP)
--

After Democratic presidential candidate Bernie Sanders was interrupted for a second time by Black Lives Matter activists over the weekend, the democratic socialist senator from Vermont released a racial justice platform, hired a racial justice activist to be his national press secretary and then told a overflow crowd of 19,000 supporters that "when we stand together, when we say that enough is enough, this country belongs to all of us."

On Saturday, Sanders attended an eventful campaign stop in Seattle, Washington where two activists who claimed to be affiliated with the Black Lives Matter movement jumped on stage and interrupted Sanders' planned speech on Social Security, forcing the Vermont senator to leave the stage before addressing the crowd. In a Facebook post, the activists explained their rationale for confronting the progressive politician:

This city is filled with white progressives, which is why Bernie Sanders’ camp was obviously expecting a friendly and consenting audience for today’s campaign visit. The problem with Sanders’, and with white Seattle progressives in general, is that they are utterly and totally useless (when not outright harmful) in terms of the fight for Black lives. While we are drowning in their liberal rhetoric, we have yet to see them support Black grassroots movements or take on any measure of risk and responsibility for ending the tyranny of white supremacy in our country and in our city.

Sanders has consistently held some of the largest campaign rallies of this election cycle on either side and after his first stop was shut down, his second stop of the day saw 15,000 supporters in attendance. It was at that stop that we were introduced to Symone Sanders, the campaign's new national press secretary, as she introduced him to the crowd.

Sanders, a young African-American woman, is of no relation to the presidential hopeful but told Buzzfeed that she reached out to him to offer advice on how best to handle emerging criticism from the Black Lives Matter movement. Sanders' hire was announced on Saturday and she previously served as the national youth chair of the Coalition on Juvenile Justice, a nonprofit focused on American youth in the justice system:

“Educating America, the community, letting people know who Bernie Sanders is and what he’s about,” she explained is her most important role. Sanders said that it's not enough for candidate Sanders to simply say "Oh, I fought for civil rights and I protested and I sat at the lunch counters."

"That’s important and that’s great but that was 50 years ago and he has a lot more to stand on than just what he did 50 years ago,” she insisted.

To that end, Sanders' campaign released a racial justice platform aimed at "affirm[ing] the value of [America's] people of color" by "addressing the four central types of violence waged against black and brown Americans: physical, political, legal and economic."

So far, the platform -- which tackles issues like for-profit prisons, out-of-school suspensions, and mandatory minimums -- has been well received by leading Black Lives Matter activists:

On Sunday evening, Sanders saw the largest crowds of this election cycle when a record 28,000 people showed up in Portland, Oregon to hear him speak.