The "hot mess" humblebrag: Successful white women still love to pretend their lives are in shambles 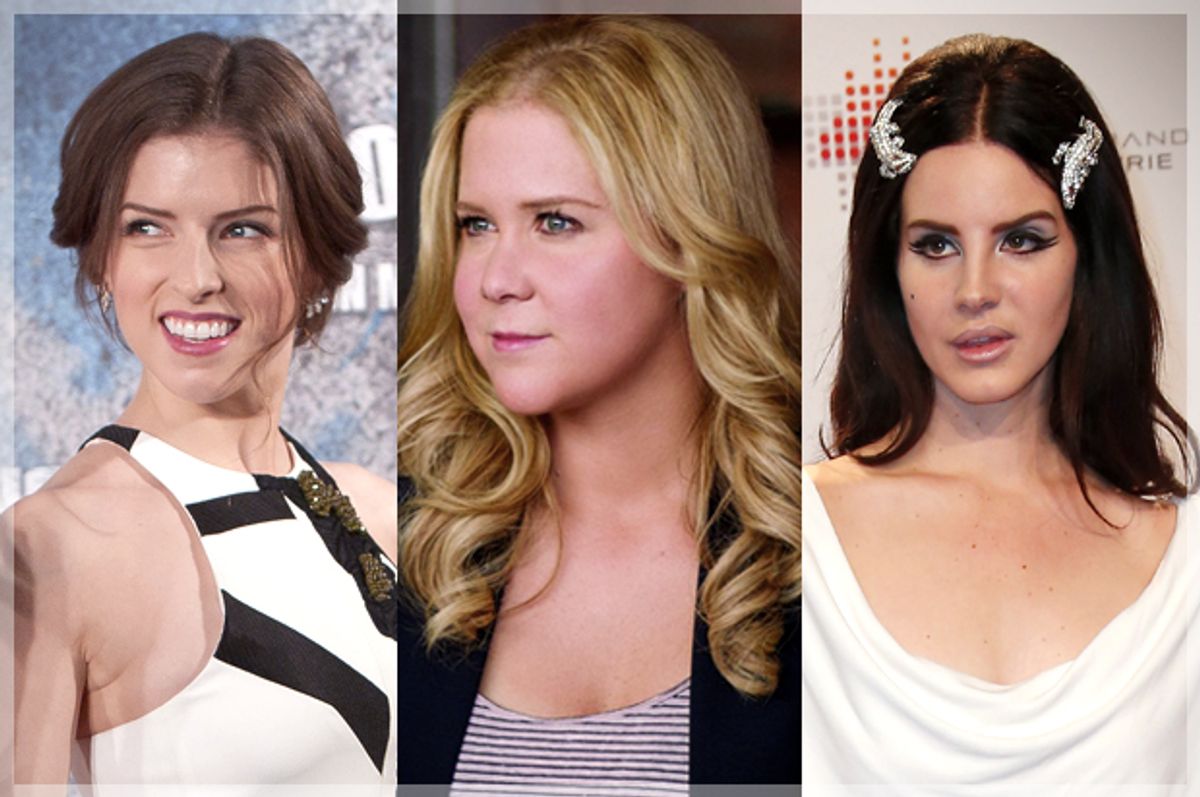 Anna Kendrick—Oscar-nominated actor, singer-songwriter, Broadway star—picture of success. In fact, across her tiny waist reads “Success: You’ve got this” on the June 2015 issue of Glamour. Yet, beside her assured, almost confrontational gaze, a sideline appears in cerulean sans-serif: “self-described “hot mess”…and proud of it.”

A month later, Judd Apatow’s “Trainwreck” poster features the indomitable Amy Schumer, clad in a bridesmaid-yellow strapless top, shooing the camera away with her left hand as her right foists a brown-bagged beverage to her feisty face. A tuxedoed Bill Hader hides behind her. “We all know one,” reads the caption.

Or rather, it would seem, we know many. We encounter enough so-called female hot messes these days, the modern man may as well be equipped with a lifetime supply of Armor All. Because ultimately, isn’t the mess only “hot” when a guy can swoop in and mop it up? Such has been the trope of the rom-com since Carole Lombard crumpled in the arms of John Barrymore, but today’s ostensive “trainwrecks” transcend the genre and the Hollywood arena. The “mess” spills into her local Starbucks, saunters across a premiere college campus, collects airline points with her credit card, and doesn’t come with the clear expectation that men are inherently antiseptic.

Proclaiming oneself a “hot mess” has become a badge of honor for virtually all successful Caucasian women between 20 and 40. Once a choice epithet for the fashion blogger or Lohan-minded minion, the phrase now takes on an ironic sheen that blurs the marks of privilege. What it essentially means is, “I have such a complicated, demanding life that I proudly admit to be overwhelmed.” What it essentially suggests is, “I am super-accomplished but know the women (and men) who aren’t will find me more likable if I espouse an ineptitude for getting through the day.” What it essentially communicates is that— in all significant ways—“my life is markedly tidier than it is for the vast majority of womankind.”

In 2014 TIME chronicled “How the Meaning of ‘Hot Mess” Has Changed Over History,” referencing Amy Schumer’s Comedy Central sketch comedy and the operable definition to which it seems to attach the phrase. To Schumer and those who enjoy her show, a “hot mess” today is: “someone in obvious disarray or disorganization, esp. while remaining attractive in spite of this.”

This disjunction between conspicuous disorder and surface appeal makes total sense. Even Type-A Taylor’s claiming to be a “nightmare dressed as a daydream.” What does not make sense is the gender- and race-neutral “someone.” “Someones” don’t go around priding themselves on leading chaotic lives. “Someones” don’t instinctively parade their insufficiencies on national networks and primetime programs. The ones who do brazenly self-identify as smoldering “messes” remain a finite, blown-out bunch: self-aware and (often smugly) accomplished white women.

But isn’t such self-awareness a good thing? Isn’t public humility about one’s patent lack of perfection a relief in an age when women are expected to fulfill more roles than ever? Slate's movie critic Dana Stevens seems to think so, and maybe she’s right. Stevens stresses “[t]he cultural place Amy Schumer occupies at this moment: that of a brashly honest young comedian who’s building a successful career on the radical premise that, even as a pretty blonde woman who talks a lot about sex, she intends to get away with being exactly who she is.”  While I applaud any woman, or man, who manages to move up in the world by being “exactly who s/he is,” I question why “being oneself” necessarily equates with being out of control—a “trainwreck” or “mess” that so closely resembles the “hysterical” woman of yore, just another way to categorize women as little more than bundles of silly libidinal chaos, too frantic or combustible to take seriously.

Schumer’s onscreen persona isn’t “exactly who she is,” of course. “She’s probably the hardest worker of any writer I’ve ever worked with,” says Apatow in an interview with Nerdist. “When I give her notes on the script, she’ll give it back to me in three days… She’s very, very disciplined.” In the film, this ethic is virtually nonexistent and Amy is ultimately fired for nearly sleeping with an underrage intern. In that same interview with Apatow, Schumer downplays her creative power and self-motivation. “I don’t think I would have even had the confidence to try to do [the movie],” she says. “But Judd really encouraged me and made me feel like it was possible.” Overall, her focus is on the “messy,” and thus more accessible, side of Amy. “I think everyone is partially a trainwreck. I’m just for some reason more willing to share that with everybody.”

Outside mainstream Hollywood, “hot mess” as an ironic posture was on full display in the early summer tour of iconic “wreck” Courtney Love and headliner Lana Del Rey. Love knows her fans expect bad behavior, and preemptively announces prior to “Celebrity Skin” that she “is going to be good…you’re not going to be bored.” In the second half, Del Rey moans, “I’m fucking crazy… I know you like your girls insane,” with a performance production polished within an inch of its manicured life. Before her adoring crown-flowered fans, she sways in an immaculate white dress, her false lashes perfectly in place. Sliding down the stairs with a stiff-faced companion (bodyguard?), she greets her fans calmly, methodically, granting graceful autographs and placid smiles for selfies. She is equanimity defined, and yet celebrates the supposed fact of her “craziness.”

Google-image “hot mess” and you’ll find endless thumbnails of other young white women behaving badly. Not one is a man. Few are woman of color. Successful men know that their intimidation quotient holds only sway with both women and other men. Successful women of color are painfully aware that public conceptions of their race presume hot-mess status. This is why you find Michelle Obama and Kerry Washington and Toni Morrison and Rihanna and Supreme Court Justice Sonia Sotomayor directly asserting their competence in every interview or publication. Yes, I said Rihanna. Despite—or perhaps, because of—her thorny relations with Chris Brown, her magazine covers promise a good dose of power and control. Rihanna is “nailing her style” and “learning how to be fearless”; she is “stronger and wiser.” RiRi: sudden sage. One Kerry Washington 2013 cover proclaims, “She’s giving life advice, and it’s awesome!” Two years later, Lena Dunham (supposed white-girl “hot mess” extraordinaire insofar as she defines success from any angle) does an interview with Washington and the cover of Marie Claire reads “Why We All Want to be Kerry Washington.” Who is the “we”? It seems white women turn celebrity women of color into surrogate philosophes, while famous white women get to brag about how clueless and messy they are.

In 2013 Meredith Lepore published “Why It’s Good We Are Getting Over Being a Hot Mess,” citing Mindy Kaling, Amy Poehler, Tina Fey, Beyoncé, Janelle Monáe, and Nicki Minaj as examples of women who own their imperfections without disavowing their talent. (Note only two of these women are white, and those white women also happen to be at least a decade older than the others, as though it takes white women until their forties to grow up.) Kaling has been particularly outspoken on how her “killer confidence” is a result of honest labor at getting very, very good at what she does. “I work a lot. Like, a lot a lot….[t]he result of which is that I'm usually hyper-prepared for whatever I set my mind to do, which makes me feel deserving of attention and professional success.”

But to strike this balance of humility and confidence is no small feat. On one end it’s easy to slippity-slide into a persona of sorry quirks. Women might like you (and so might men), but they likely won’t respect you. On the other end, it’s easy to come across as preternaturally impervious to life’s demands: “perfect” and ergo perfectly revolting. Consider, for example, Gwyneth Paltrow’s polarizing lifestyle empire—her “conscious uncoupling” decree a “Goop” de grace at the countless suffering through separation and divorce.

So it is no surprise that many of the most gifted among us pretend that they are not. That Glamour interview with Kendrick launches with the following: “Anna Kendrick is wearing a sweatshirt and jeans. She has no makeup on, and most of her frizzy hair is pulled back in a band. She looks like a hot mess. I have to say that because I promised Kendrick I would. “Just say, ‘She looks like a hot mess!’” she says, laughing.” Later in the article we learn that “Kendrick isn’t really one to fuss about her looks, and these days she wouldn’t have time anyway. The 29-year-old currently has eight films on her roster....”

Too busy to fuss about one’s hair? Check. Not too busy for others to perfect said hair for a magazine? Double check. So confident about your success that you actually tell a magazine to call you a “mess?” That’s when the meaning of the phrase becomes coated in an irony too wild for even the Glamour flatirons to smooth.

In 1950 Lucille Ball founded Desilu Productions and became one of the most powerful, competent creative forces in Hollywood. At the same time, as “Lucy,” she was a bubble of blunders, hilarious slapstick failures often the direct result of not listening to her husband and/or proving overly ambitious in her housewife schemes. The difference between “Lucy” and contemporary “messes” is that we laughed at, not with, her. We witnessed her mess and it was funny—precisely because the character was pathetic. Anna Kendrick is not pathetic. Amy Schumer was crowned by Glamour UK as “Trailblazer of the Year.” And while it is, sadly, novel to think we can celebrate women who aren’t performing perfection, isn’t it alarming to think one can only celebrate herself by feigning a risible “chaos”? Make no mistake: if someone tells you she’s a “hot mess,” she is likely a highly functional white woman clawing her way up the ranks.