"True Detective" recap: The beauty of the finale couldn't save this flaming disaster of a season

Was that the light winning again? Who the hell knows? 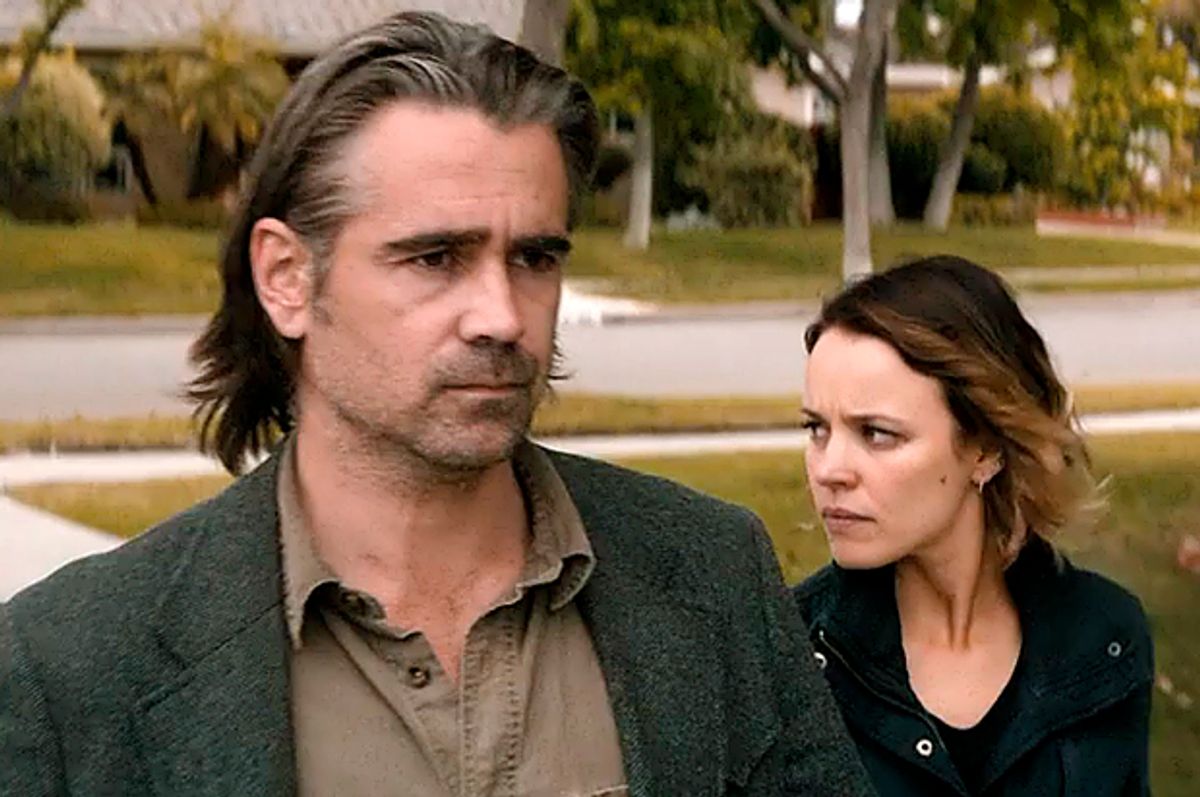 The best thing I can say for last night’s 90-minute “True Detective” finale, “Omega Station,” is that it’s very beautiful. The direction of this season has left me a bit cold, but material aside—very, very aside—“Omega Station” is the first episode of “True Detective” this season that had any kind of visual style, any sort of cinematic narration. I found the opening scene to be legitimately fantastic—a layering of dialogue with non-linear shots of Ani and Ray in various stages of waking up, alternately watching the other sleep, smoking cigarettes, getting dressed, staring into space. Ani says the first word of the episode, and oddly, it’s “trees”: That’s primarily what she remembers from being abducted and molested at the age of 5. Insofar as it’s snapshot of a moment in time, an oasis in between moments of chaos, it functions beautifully.

But once the story starts again, as it must, the fleeting charm of the scene is lost to the same problem that have dogged “True Detective” all season—a convoluted, lengthy and unsatisfying story. If your show needs a Slate explainer in order to catch up not just casual viewers but also people who watch TV for a living, it is not doing a very good job with storytelling. Now that the season is concluded, I can safely say: There were huge swaths of this season that should have been edited down, rewritten or cut entirely. There is no good reason for Taylor Kitsch’s character to have existed; he was extraneous from the start and expendable enough that he could die an episode early. Chad Velcoro’s paternity was coded as a red herring in the very first scene of the show. The bureaucratic conspiracy was entirely opaque, and there was just way too much going on: The sex parties, the diamonds, the commune and the rail line corruption could have been safely written out without affecting the characters’ central arc, and that is never a good sign. What did end up central to the story snuck into the plot via twists so random — and so boring! — that they rendered the narrative thrust of the season meaningless.

“Omega Station” offered up a few more examples of this. First, there’s the reveal of “birdman”— a man who used to be a boy who was victimized by some of the corrupt cops and we know about him because of a photo and also that he was on a movie set. As soon as we meet him, he’s dead, give or take a few minutes. His briefly unveiled character reveals nothing of the creepy menace of the figure who shot Ray with rubber buckshot, or the terrifying omniscience of a murderer who seems to know too much about the inner workings of Vinci.

Then there’s the unraveling of Frank Semyon, who dies literally because he refused to take off his suit. His stubborn march through the desert is filmed and even acted beautifully — a long trail of blood over white sand, with Vince Vaughn struggling to move forward until all of a sudden he doesn’t have to anymore. But who the hell were all of those previously unseen ghosts, leveraging racial undertones and homophobic slurs at him? And what value is there to introducing major elements of a character’s back story into the last few minutes of both his life and the show’s run?

And finally there’s Ani’s baby — a cliché if there ever was one, and one that my colleague Todd VanDerWerff at Vox predicted way back in the second episode. You want there to be drama about Ray’s paternity and Ani’s relationship to her femininity? Well, why not toss in a baby after the one time they have sex? Oh, it’s a cheap way to end something, and even if McAdams sells it — and Farrell, in the scenes leading up to his death, delivers a truly tragic unraveling. You have to earn your goddamn plot babies, Pizzolatto — and how reductively male-centric to see having a child as the end of something, rather than the very messy beginning.

Really: What was the point of “True Detective” Season 2, besides Nic Pizzolatto had eight hours to fill and a big budget to spend? I don’t mean to be rancorous, here; I’m honestly wondering. There are ways in which the season attempted to uncover some contradictions of masculinity — some fundamental trials of femininity, too — but it typically lost the thread in the layers and layers of its dysfunction. What, exactly, am I supposed to take away from Ani still carrying a knife in her boot, along with a baby in a sling across her chest? How am I to feel about Frank and Ray both dying alone? What is the intended effect for the audience, seeing that Paul Woodrugh has a highway named after him? Seriously: Is there a story here? And what work has the creator done to deliver it to us?

Look: Storytelling is hard. It’s possible to see what Pizzolatto was trying to accomplish — if anything, “True Detective” Season 2 is an argument against men, and for (white) women, as every man dies, and it’s the women who move forward to inherit the (flawed) earth. But it’s also quite clear that on a network that has showcased some of the best television of our generation — that, indeed, has built a pedigree around reliably incredible programming — this is barely coherent TV, let alone good TV. It was always going to be hard to follow Season 1, but this was an unmitigated disaster, save a few salvageable clips that Rachel McAdams, Vince Vaughn, Colin Farrell and even poor Kitsch will be submitting for Emmy consideration. The season lacked both vision and mastery; it suffered from lack of purpose and poor execution. And it’s not the fault of the show’s crew, who created a well-appointed and recognizable world, or the actors themselves, who read their lines and took their direction as best they could. “True Detective” Season 2 suffered from a flawed germ of an idea, right from the start. No one down the line had the courage to say that this was an idea that needed more time or more expertise, and the result is an experiment that ended last night with an hour-and-a-half that satisfies only the lowest expectations.

Instead, “True Detective’s" second season is a story that relies on awkward ethnic groupings (“Mexicans,” “Russians” and that random black “gang” hassling Frank in his hallucination), illicit sex (don’t forget: prostitutes are both everywhere and also bad) and the flawed centering of male heroes who feel more pain than anyone else and thus suffer the most unique tragedies. “True Detective” should have been an inversion of pulp fiction tropes, a subversion of the genre that remained true to the poesy and romance of that genre. That’s what Season 1 did, after all. Instead, it holds those tropes up — and not even in a particularly fun or compelling way, which is, after all, why pulp fiction exists in the first place.

It’s a pity, because “True Detective” had built itself quite a platform and a broad base of goodwill. And while HBO may be pleased — the show certainly feeds into the network’s worst tendencies in terms of pandering to the male 18-49 demographic — the show has now, unfortunately, become a punch line. I wish Nic Pizzolatto had developed this idea into a feature-length screenplay, or a novel, or a single episode of something broader. I wish he had perhaps hired a few other writers or an editor or two. But mostly, I just wish it had been better.