A "Smart Girls" misfire: "Experimenting with Megan Amram" is more likely to inspire a generation of comedians than STEM majors 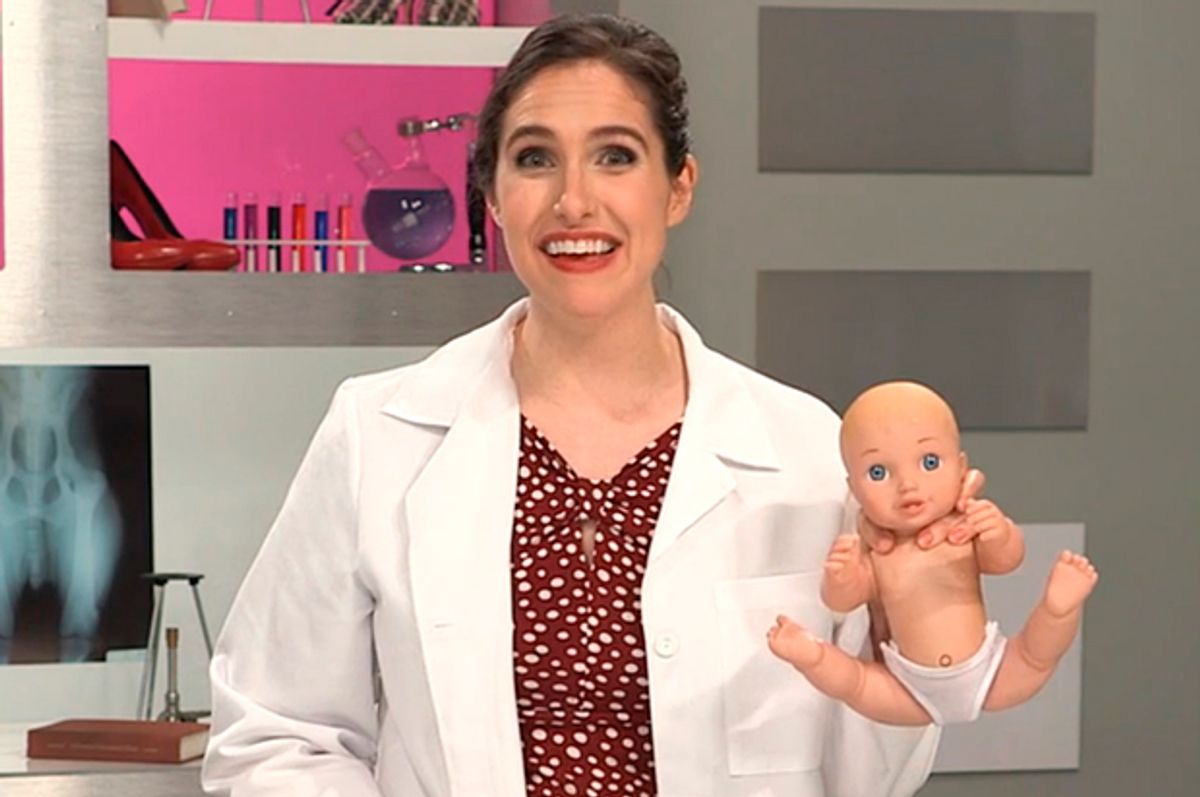 I love "Amy Poehler’s Smart Girls” website. I follow it, rejoice in it, and basically believe it to be a positive force inside a sea of negative models exploiting female insecurity. So when “Smart Girls” announced it would be hosting the weekly comedy web show, “Experimenting with Megan Amram,” I had high hopes for a series intended to encourage teen girls (who are ready to move against the crowd, as the site's mission states) to major in Science, Technology, Engineering, and Mathematics (STEM)-related fields. Who wouldn’t loook forward to a comedic version of Emily Graslie’s terrific series, "The Brainscoop"?

The project appears to be an offshoot of Amram's popular science-meets-lady-magazines parody "Science ... For Her!" by Amram, a former writer for NBC's "Parks and Recreation" and one of Rolling Stone's 25 Funniest People on Twitter. The premier episode of Amram's show is now available to view. Right away, a breathy female voice coos: “Science, oooh. Sexy!” Err…what? I’m confused. What is the target age group of this show again?

To watch the experiment portion of the show, you'd think it's rug rats just beginning to age out of Nickelodeon. Amram opens her segment by setting out the ingredients to make a potato clock, in the manner of a kooky cooking show. Fine, and fun enough, but it’s not “science.” It’s what you get your seven-year old brother to make when you’re 1.5 years younger and have too many potatoes to peel. Which I did, and he did, then he used the potato battery to power up a robot he’d also made. After we inevitably got into an epic fight, I grabbed the potatoes and made pancakes out of them. He became a computer engineer, and I didn’t. I don’t think sexism in the sciences had anything to do with it.

Making a potato clock is no different from assembling Mr. Potato Head unless you’re also getting a lesson in chemistry, and even then, it’s like freezing your tongue to the flagpole: everybody tries it once before getting too large to sit on the teeter-totters. So if little girls are Amram’s target age group, then hitching a “sexy” intro to this kind of content is really off the mark. And if the series is hoping to convince Cosmo girls that “sexy science” is a thing, then, bluntly, it would have a lot more success if the Norse god of thunder, Thor, was her co-host. He thinks lady scientists are hot.

Yes, I get that Amram’s show is supposed to be a parody of sexist stereotypes clinging to women in the sciences, and I really wanted to like this effort. But not only is the objective—“sexy science!”—depressingly confused about the impediments discouraging girls from pursuing STEM, “science” is not, in fact, sexed up when brainy women turn themselves into bimbos (even with a knowing wink). All that accomplishes is the reinforcement of negative stereotypes, in the manner of Bond girls Holly Goodhead (Lois Chiles), astronaut and rocket scientist, and Christmas Jones (Denise Richards), nuclear physicist, both of whom have gone down in the annals of movie history as two of the most cringe-worthy female foils in the franchise, with Dr. Jones topping the "worst" list.

Amram’s first guest is Beverley McKeon, professor of aeronautics and current director of the Graduate Aerospace Laboratories at the California Institute of Technology — in pop culture terms, the school where the fictional boys from “Big Bang Theory” teach. By any metric, McKeon’s accomplishments are remarkable, but even more so because she is a woman in a one of the most male-dominated of fields. And yet, when Amram interviewed her, their dynamic played so much like a scene from “Idiocracy” that I kept on expecting Amram to roll her eyes at the camera and mouth the words, “This is soooo boring! (tee hee, don’t you get it? I’m being ironic!),” whenever McKeon started talking about the physics of fluid dynamics, known in everyday parlance as the “drag co-efficient.”

Now, anyone who has written humor can spot three potential jokes in this last sentence, and I’ll bet that sharp readers will pick them right up. Comedically speaking, it is also the case that there is nothing intrinsically wrong with interviewing serious people while pretending to be clueless. For example, if your guest is not only in on the joke, but also a politician who enjoys being in the spotlight, this set-up can totally work. Unfortunately, very few world-class scientists are also hams for the camera. Nobel Prize winner Richard Feynman was one. Primatologist Jane Goodall is another, but even Jon Stewart didn’t try to be “funny” with her. He deferred to her awesomeness, and gave her plenty of space to charm the audience using her own, inimical ape-language words.

This is just a long-winded way of saying that certain lines cannot be crossed without venturing out of the “ha-ha” zone. (History buffs will catch the joke here.) To be sure, Amram isn’t citing Stewart but Stephen Colbert’s faux conservative persona as her comedic inspiration, and her put-on of a big-eyed, vacuous perky host mostly reminds me of the routine Gretchen Carlson used to perform on “Fox & Friends.” A former beauty queen, Carlson is a graduate of Stanford University, which recently punted Harvard out of the number one spots in the categories of most selective and most desirable college in the U.S. Yet Carlson regularly pretended, with dramatic huffs of outrage at pretentious liberal elites, that she didn’t understand what words such as “ignoramus” meant. I ask you: how is Carlson's act not a meta comedy routine?

Amram’s opening line: "I love science, but I also love looking good. I went to Harvard. Let’s begin!” emerges straight from that faux bobble-head vein, which says more about the pressures on her, a young female comedian, to be sexually appealing (in a nonthreatening, gender-conforming, heteronormative way), than it does about structural barriers discouraging women from majoring in STEM fields.

Take that potato clock, which she turned into a baby alarm. The desire for a family happens to pose a very real dilemma for whose women whose fertility goes to defcon 1 when they're just starting to job hunt. With very few exceptions -- namely Sheldon Cooper and Spencer Reid, neither of whom are women nor, for that matter, real people -- you’re in your 30s by the time you’ve finished a brutal yet exhilarating Ph.D. program that leaves no time for eating vegetables. (There’s two jokes here, by the way, one nice and one naughty.) Then grad school morphs into an endless series of post-docs or the new norm of permanent adjuncting, which pays so little that survival requires food stamps. Women prefer to avoid pregnancy when they can’t pay their bills, and it is not uncommon for academics to perambulate professionally well into their 40s. At which point, if you still yearn for motherhood, your ovaries might as well be tiny potatoes, with just enough zing left in them to power up one oocyte…then fizzle.

No amount of magical thinking can make this quandary disappear. The solution isn’t more misogynistic nonsense but adjusting the legal conditions of “work” to acknowledge that pregnancy takes nine months and parenting spans 18 years. It does not advance the conversation to keep on drawing attention to the fact that women have breasts. (All mammals have breasts, by the way, males included. That’s why humans belong to a taxonomic group called “Mammalia” rather than, say, “Testiculus.”)

Of course there is sexism in the sciences, just as there is in every professional field. If nothing else, the Tim (“women cry”) Hunt debacle of 2015 helped expose the fiction that abstract intellectual work is somehow free of human foibles and prejudices. The #DistractinglySexy hashtag was Twitter’s brilliant response. Around the world, women posted photos of themselves practicing science in labs and out in the field. The hilarity lay in the fact that these scientists weren’t playacting sexy for the camera, but sporting trendy hazmat suits and the latest fashionable lab goggles.

One of these distractifying women is Chanda Hsu Prescod-Weinstein, a theoretical physicist appointed to the Kavli Institute for Astrophysics and Space Research at The Massachusetts Institute for Technology. An openly agender/cissexed female whose focus areas include dark matter and quantum fields in curved spacetimes, she is the 63rd Black woman in U.S. history to receive a Ph.D. in physics. It’s not just her mind that is stunning, amply demonstrating to skeptics that it is possible to possess beauty matching the brains. (Trending currently on Twitter: a whole lot of STEMsters fed up with the stereotypes. Check out #ILookLIkeAnEngineer and #ILookLikeAProfessor.)

Putting it mildly, Dr. Prescod-Weinstein was not impressed by “Experimenting with Megan Amram.” In a disappointed email to me, she writes: “Science can be fun, interesting and light hearted without relying on jokes about bimbos, offensive comparisons with homeless people or ableist language like ‘duh’." She adds: “People are looking for a more inclusive vision of role modeling. Megan's brand of ‘comedy’ is centered around responding to tropes about white womanhood. The existence of women of color and genderqueer people in general aren't acknowledged in it, and that limits the utility of this approach, even if it were actually funny, which it isn't.”

Her suggestions to improve the show? A co-host. Not Thor. “I would love to see a woman or genderqueer comedian partner with some women and genderqueer scientists,” she suggests. To which I might add, dunno, given that Amram’s (theoretically) trying to turn girls onto science, maybe do some actual science on the show?

So here is the advice of two Ph.Ds, one in the sciences, the other in the arts: Appeal to unbridled curiosity about the way the world works — why have dogs evolved to hear higher frequencies than humans? Why does sand always tumble into the shape of a pyramid? And 2) Make us laugh in surprise, amazement and delight. Sexy science, accomplished!