"I'm worth it": How a self-help refrain became the pop anthem of the summer

A short cultural history of the phrase, encompassing "The X Factor," Beyoncé, Missy Elliott and L'Oreal 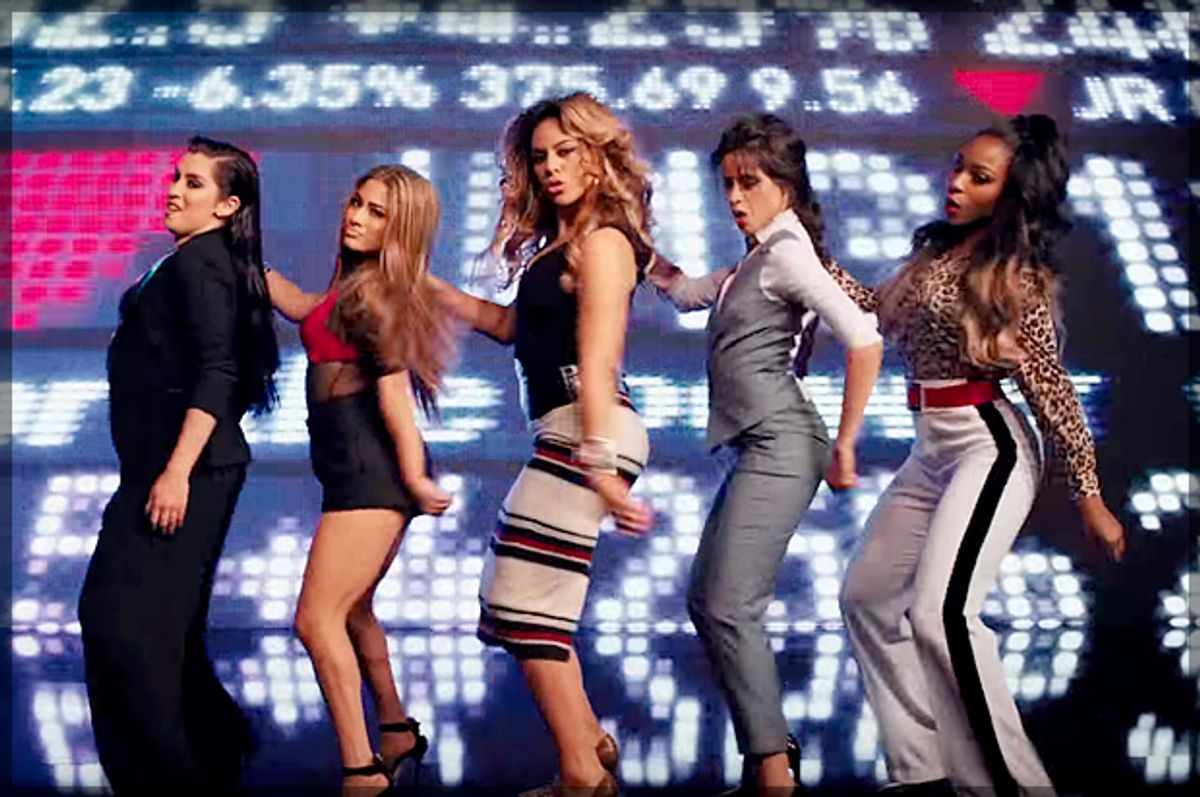 We live in a moment of totally sick horn intros. Pharrell’s “Happy” and Ariana Grande’s “Problem” each kick off with catchy brass hooks; smash hits “Uptown Funk” from Mark Ronson and “Shake It Off” from Taylor Swift depend on horns to bring their choruses home. These four pop acts—chart-topping veterans, at this point—were joined this summer by a serviceable, slim track from a girl group called Fifth Harmony, whose unbelievably catchy “Worth It” became a surprise Billboard top 20 hit.

Fifth Harmony is a five-member girl band, à la One Direction. The youngest, Dinah, is 18; the oldest, Ally, is just 22. They formed three years ago on the second season of “The X Factor,” the Simon Cowell-helmed reality-television show on Fox that was canceled after just four seasons. They’re known for having very enthusiastic fans, many of whom have followed the group since the television show. These fans are called Harmonizers, and most of them are teenagers—although for $19.99, you too can become an official Harmonizer, if you want.

Still, despite the rabid fan base, “Worth It’s" success surprised Fifth Harmony; the now-platinum single followed “BO$$” and “Sledgehammer” off of their debut album, “Reflection.” After all, in addition to being performed by relative unknowns, “Worth It” features rapper Kid Ink, himself a relative unknown. That catchy horn hook is Middle Eastern-inflected saxophone, of all things—the addition of the track’s Israeli-American producer, Ori Kaplan. “Worth It” is a very manufactured pop song, but that it snuck into the incredibly managed world of top-40 pop music is fascinating indeed.

Kaplan’s horns, naturally, carry a lot of the weight, and the Harmonizers, of course, deserve a lot of the credit as well. But it’s really the “I’m worth it” of “Worth It” that makes the song into an instant pop anthem; the song’s unapologetic refrain claims power both in the bedroom and the boardroom. Seriously: The lyrics work almost as well for salary negotiation as they do for sexual empowerment, and in the music video, Fifth Harmony doubles down on that. The women are backed by a wall of stock tickers, and for their solos, they’re wearing deconstructed business suits—while voguing on desks, playing mini golf in corner offices, and lounging in the backseat of chauffeured convertibles.

The timing, musically, is impeccable. “Worth It” is the doppelgänger to The Weeknd’s “Earned It,” an inescapable pop hit from last year that was featured on the “Fifty Shades of Grey” soundtrack. The single is a crooning R&B serenade, albeit updated to hit hipster sensibilities, mostly with lots and lots of synth. Musically, it’s a better song. Semiotically, its “worth it” is not “I’m worth it,” but rather, “girl, you’re worth it”; the singer points out that the subject of the song is specifically worth it because she’s “earned it.” Beyoncé, on Famous Kels’ track “I’m Worth It,” sings the titular hook: “He said / He said / I’m worth it / I’m worth it.” To which Kels responds: “Damn right you’re worth it / Fuck me good on purpose.” Kels’ love song—for it is a love song, despite my selective characterization—has the rapper articulating why he thinks his girl is worth marrying. The implication from both Kels and The Weeknd, though, is that worth is something bestowed from a man to a woman.

Being “worth it,” especially for women, is a constant source of struggle—whenever a subsection of the population is historically defined for their utility to their oppressors, some internal angst is expected. Naturally, the struggle of female worth is one that marketing has seized on—L’Oreal’s most famous slogan is “Because I’m worth it,” which was amended to “Because you’re worth it” and then, later, “Because we’re worth it.” It’s a sticky wicket—one that sounds like empowerment, but hinges on the purchase of cosmetics to deliver that power. You see the same thread in that most-dreaded section of the bookstore, self-help. “I’m worth it” goes hand-in-hand with the self-help conception of self-worth, and can be found said emphatically in any number of texts that speak to people in dire straits, physically, emotionally or financially. It can be sincere, but there’s desperation in its tone; the self-worth doth posture too much. The person most likely to lean on “I’m worth it” is the one who doesn’t feel it. This is encapsulated rather beautifully in Nicki Minaj’s plaintive “Marilyn Monroe,” she raps, “I’ll never be perfect / believe me I’m worth it.” This is not an anthem of perceived strength, it’s a ballad of vulnerability; Minaj is trying to convince the listener or herself that she’s better than what she feels herself to be.

Trust Missy Elliott, way back in 2002, to have seized upon “worth it” and turned it into part of a narrative on having sex when and how she pleases, with “is it worth it? / let me work it,” the first lines of “Work It.” In Fifth Harmony’s “Worth It,” there is not even a question—no opportunity for even the merest hesitation: “Give it to me / I’m worth it / Baby I’m worth it / Uh huh I’m worth it / Gimme gimme I’m worth it.” Later lines include: “I think I’m a call you bluff / Hurry up / I’m waiting out front” and “I don’t wanna waste my time … Come and make it worth my while.”

In an interview with MTV about their corporate-inflected music video, Fifth Harmony directly referenced feminism.

Camila revealed how they fan-sourced the messages scrolling across the ticker. “We also wanted to incorporate feminism and girl power and our fans, so we kind of did this Twitter thing where we… told them to send in tweets saying why they think feminism is sexy and why they think it’s cool and why they think women empowerment is awesome,” she said.

“We can also say that the gender roles were kind of swapped within the music video,” Normani added. “That’s a point that we really wanted to make sure that stood out.”

There is something hilariously reductive about “feminism” and “girl power” in the above quotes; certainly, Normani explaining that the “gender roles were kind of swapped” is so earnest it’s almost painful. But at the same time, there’s something incredible about how simply the lines are drawn for Fifth Harmony, from attitudinal assurance to gender equality.

It could be seen as reductive, but there’s something ideologically refined about it, too. “I’m worth it” is so self-evident it needs no lyrical qualifiers—just a long saxophone riff. Beyoncé’s “All the Single Ladies” transformed a club DJ’s standard refrain—that all the single women put their hands up, so that men looking for partners could find them—into an anthem of empowerment. To paraphrase Martin Seay, no DJ will be able to call out “all the single ladies, put your hands up” again without invoking a different message entirely. The same, to some degree, is true of “Worth It”—L’Oreal’s condescending “Because you’re worth it” responded to with a raucous “gimme gimme.”

“Worth It” is a reminder of the effortlessness that feminism aspires to, an effortlessness that does not seem possible in our world of made-up Planned Parenthood controversies and apologizing Megyn Kellys. A world where the struggle for gender equity is not all-encompassing, because the implication that women were not worth it right from the start would be risible. Fortunately, as it’s ideally listened to at high volume with the windows down — or turned all the way up on the dance floor — it’s one hell of a vision for the future.