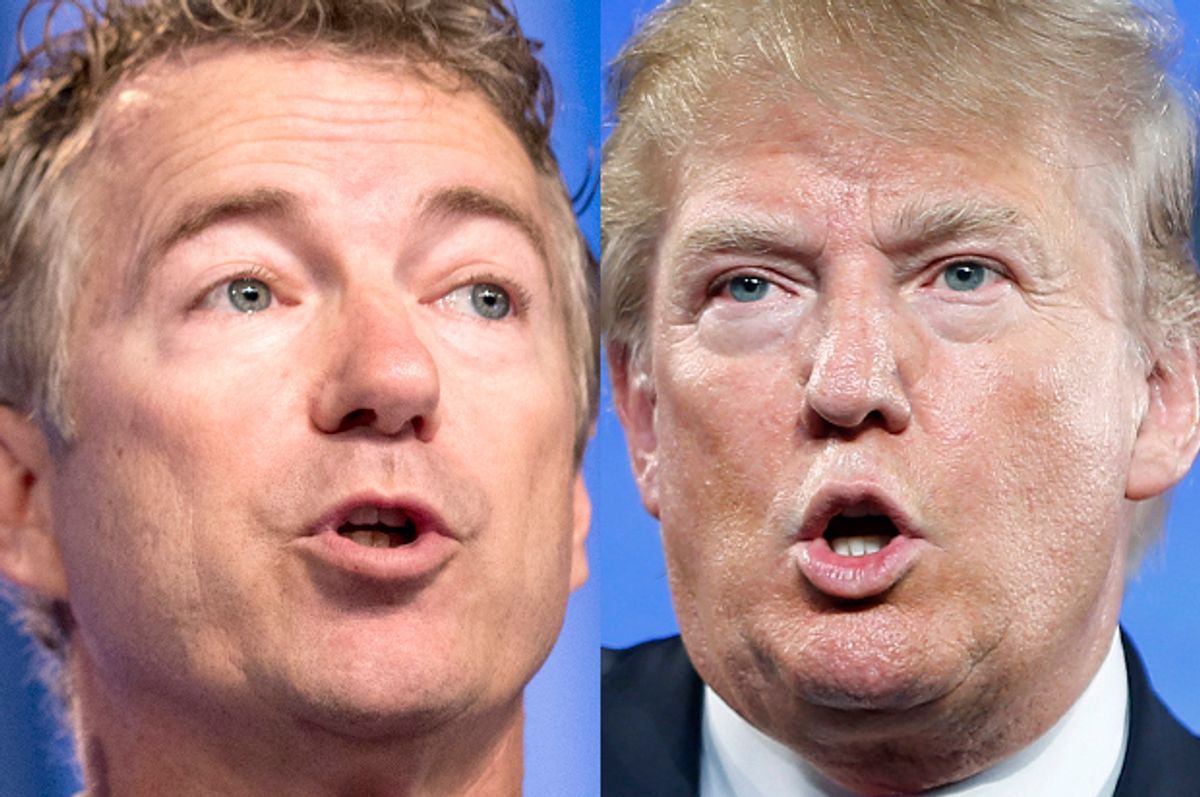 Rand Paul is working hard to find a way to get himself back into the presidential race. As the summer has worn on, his 2016 campaign has hit the skids and begun showing all the telltale signs of a failing political operation: weak fundraising, staff infighting bleeding into news reports, plunging poll numbers, and transparently desperate bids for attention. Headed into last week’s debate he suffered yet another setback: the staffers and longtime aides he’d picked to run his super PAC were indicted in connection with a 2012 campaign finance scandal. And so ever since the debate, Rand has been trying out a new strategy: he’s positioning himself as the anti-Trump.

He was the first and really only Republican candidate in the main stage debate to aggressively go after Donald Trump. He attacked him as a fraud, a phony and a corrupt plutocrat. Trump is every single one of those things (he admits to giving money to politicians so that he can cash in favors later on) and Paul was completely justified in attacking him on those points. In the days since the debate, Paul has kept up the pressure on Trump in television interviews and Op-Eds.

The crux of Paul’s attack on Trump is that he’s a fake conservative. “I honestly have no idea what Mr. Trump’s real philosophy is,” Paul wrote in an Op-Ed for Independent Review Journal. “He was liberal before he was conservative, and has openly professed for decades that his views are those of a Democrat.” It’s a straightforward message to the base of the Republican Party: you can’t trust this guy, he’s not one of us, be very wary of what he’s selling. It’s an interesting move on Rand’s part for a couple of reasons.

First off, it was not too long ago that the Rand Paul campaign considered any sort of engagement with Trump to be beneath them, a waste of time, and incongruent with their overall strategy. Just a couple of weeks back, the Washington Post reported on Team Paul’s insistence that they were deliberately laying low and staying out of the “media glare” because there was no point in trying to get noticed while Trump was soaking up all the press attention:

Several campaign staffers made the same point: No one is cutting through the fog of Donald Trump. Why send the candidate to the same all-day cattle calls the rest of the field has been dutifully trucking to, only to wind up earning him one paragraph, one moment of B-roll, in yet another story about the rampaging billionaire?

Apparently that strategy is no longer operative – assuming it was the actual strategy and not just an attempt at rationalizing Rand’s diminished standing and conspicuously low media profile. Either way, the candidate is now working doggedly to steal that one paragraph of coverage and that one moment of B-roll from Trump.

But it’s also something of a bold play for Rand Paul to try and play up conservative doubts about another candidate, given that he’s making his own ideologically heterodox pitch to Republican base voters and trying to convince them that he’s conservative enough to merit their approval. “Are conservatives really willing to gamble about what Donald Trump really believes in?” Rand Paul asks in a question that could just as easily be turned around on him.

The idea animating Rand Paul’s presidential run is that he is, in his own words, “a different kind of Republican.” These differences show up in various policy positions he’s taken that conservatives won’t readily approve: cutting off foreign aid to Israel, slashing the military budget, marijuana decriminalization, and restricting government surveillance programs. He’s further complicated this already fraught dynamic by abandoning or discreetly modifying positions he’s taken in the past, insisting all the while that he’s never once changed his mind. Who is the real Rand Paul when it comes to defense spending? Is it the Rand Paul who once wanted to slash the military budget to cut overall spending, or the Rand Paul who proposed additional military spending offset by cuts to domestic programs? What would President Rand Paul do on immigration policy? That’s a difficult question to answer, given that in the five-plus years he’s been a U.S. senator, Paul has taken just about every position on immigration reform, from hardline opposition to any sort of “amnesty” to support for a path to citizenship. He is in many ways the political chameleon he accuses Trump of being.

The difference is that Rand Paul casts his deviations from Republican orthodoxy as a political asset that will imbue him with “crossover” appeal and enable him to eat into the Democrats’ traditional constituencies. When it comes to Trump, he casts those deviations and disqualifying political heresies. He’s making the case that Trump is too far outside of the GOP mainstream, while he’s just the right amount outside of it.