As Walker attempts to win the hearts of "small government conservatives," there's something they should know 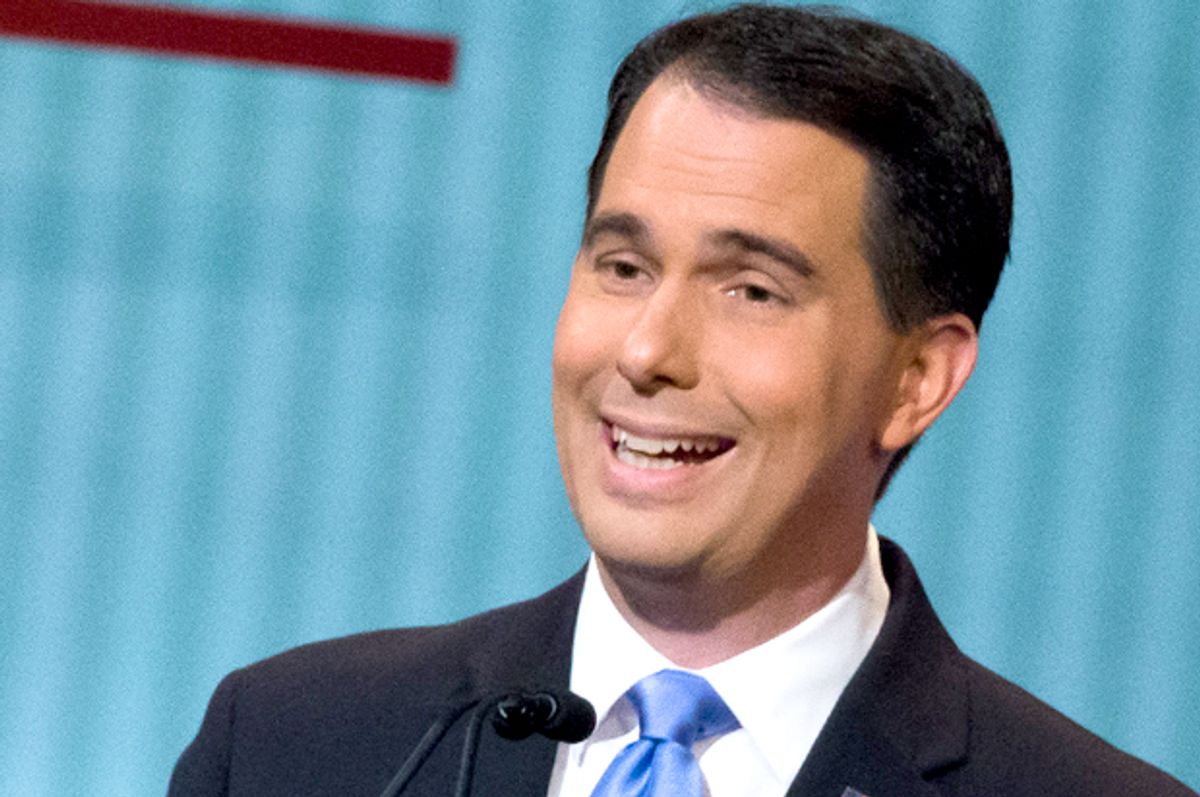 Tomorrow, Scott Walker will stand on a stage at State Fair Park in Milwaukee, Wisconsin, and betray virtually every conservative economic principle there is by handing out up to $450 million in taxpayer money to wealthy sports owners to pay for private infrastructure at a time when public infrastructure is crumbling.

The massive sum will go toward the building of a new sports arena for the Milwaukee Bucks basketball franchise, pleasing the team’s billionaire hedge-fund-manager owners, who threatened to move the team if they weren’t given taxpayer tribute. Conservatives in recent years have feigned concern about corporate welfare, and this deal is really the ultimate expression of it: hundreds of millions of dollars from teachers, waitresses, factory workers and shop owners funneled to pay for an aristocrat’s show palace rather than needed public service.

Of all the things desperately wrong with this, perhaps the most salient is the fact that the “old” arena, the BMO Harris Bradley Center, is only 27 years old, inaugurated in 1988. Incredibly, this makes it the 3rd-oldest arena housing a professional basketball franchise, behind only Madison Square Garden in New York and the Oracle Arena in Oakland, both of which have been substantially renovated over the years.

We don’t upgrade anything in this country after 27 years. There are pipes carrying water to homes that date back to the 19th century. In Milwaukee, in fact, hundreds of those pipes burst at a record pace in 2014 due to the cold weather. Seventy-one percent of Wisconsin roads are in mediocre or poor condition, and fourteen percent of its bridges are structurally unsound. If you wanted to prioritize infrastructure projects needing attention in the Badger State, “replacing the arena we built in the late 1980s” would fall down the list, somewhere below “make sure the thing Wisconsinites are riding on in cars doesn’t crash to the ground.”

Herb Kohl, the former Democratic senator, sold the Milwaukee Bucks to two New York-based hedge fund managers, Marc Lasry and Wesley Edens, in 2014; and they immediately demanded a new arena, lest they abandon Milwaukee. Lasry and Edens are worth around $2 billion each, but under the purchasing agreement they would only put up $150 million for the arena, with Kohl kicking in another $100 million. The rest would come from city, county and state taxpayers.

The usual discredited arguments propped up this deal. Wisconsin lawmakers promised great economic benefits from a new downtown arena. Walker said repeatedly it would be cheaper to keep the Bucks in Wisconsin than to lose them to some other city. This ignores the fact that the alternate universe where Wisconsinites don’t have a Bucks game to attend in April is not necessarily to sit in their homes and contemplate the darkness of existence. They’d maybe go out to dinner, with the economic activity simply substituted.

Numerous studies have shown no economic benefits to building a new stadium; it’s just something rich people say to get someone else to pay for the construction. Seattle is not a deserted wasteland because they lost the SuperSonics in 2008. They’re doing okay.

None of this mattered to politicians who could tell sports fans they “saved the Bucks,” however, and the legislature, with Walker’s prodding, agreed to cover $250 million of the $500 million needed to build the stadium. Walker’s budget literally cuts $250 million for the state university system, precisely the public share of the arena. They’re paying for it partially through borrowing, which adds interest. And if you tally up other subsidies like property tax abatements and sales tax exemptions, the 20-year cost could be as much as $500 million. That’s effectively the entire cost of the arena itself, and taxpayers will have no ownership stake in the property.

In fact, the owners will get to pocket all revenue made off the stadium, including the $4 million a year for arena naming rights, none of which has to go back into city, county or state coffers. There’s no telling how Milwaukee County will scrounge up their $80 million share, all of which could be covered by 20 years of naming rights revenue. As it is, the county will try to make their annual payment by trying harder to collect unpaid debt, a dubious strategy that puts them at risk of default.

Tomorrow’s big ceremony to hand out cash to billionaires is particularly ironic in light of conservative condemnation of crony capitalism, the way government picks winners and losers in the business community based on relationships and favors. Walker benefactors the Koch Brothers called for unity against “welfare for the rich” just last week. The Wisconsin chapter of the Koch-funded Americans for Prosperity has savaged the stadium deal.

In this case, Walker joined the push to publicly finance the Bucks stadium shortly after his presidential PAC received a $150,000 donation linked to Jon Hammes, a longtime Walker supporter and an investor in the Bucks franchise. Hammes is now the Walker campaign’s national finance co-chairman. You’d be excused for thinking that the existing friendship helped get wealthy team investors and the political leadership in sync.

There’s actually an existing policy proposed by the current president, the office Walker wants, to limit public financing for stadiums, by eliminating the ability to use tax-free municipal bonds to pay for it. This would make public funding less attractive and save the federal government billions. After forking over a half a billion on impoverished hedge funders so they can make more money with upgraded luxury boxes, Walker is perhaps an imperfect messenger for such an idea.

It’s going to take more than a John Oliver segment to end the stadium swindle. Politicians have powerful incentives to get headlines for protecting sports fans’ favorites while sticking future taxpayers with the bill. But Scott Walker making this deal while trying to become president as a “fiscal conservative” may at least put a larger spotlight on the hypocrisy. You can’t preach belt-tightening and living within our means while giving giant handouts to rich welfare kings.