"Bratton learns from his mistakes": How a stop-and-frisk architect became one of police reform's most prominent faces 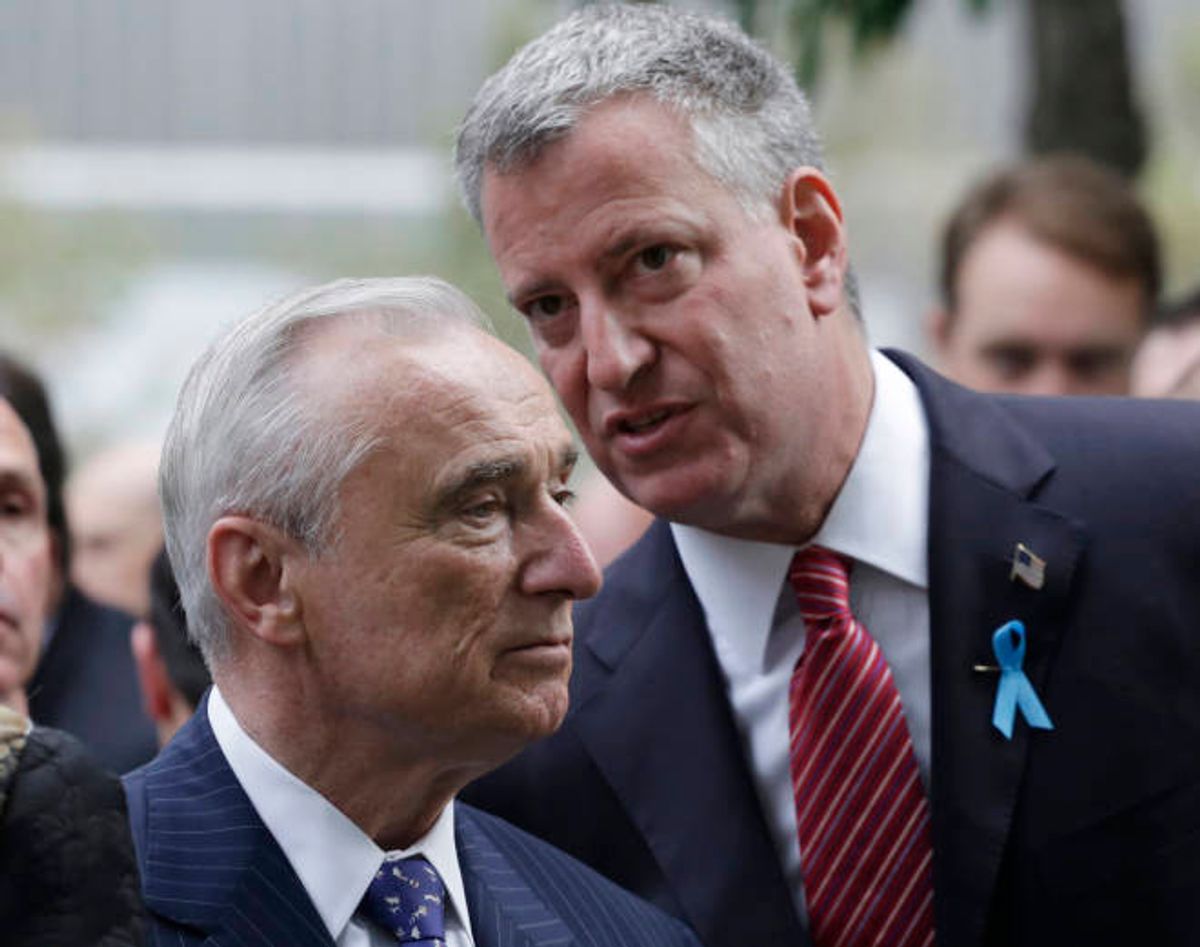 FILE - In this Sept. 11, 2014 file photo, New York City Police Commissioner Bill Bratton, left, and Mayor Bill de Blasio talk during memorial observances at the site of the World Trade Center in New York. De Blasios relationship with police, already strained by accusations he sided with frequent NYPD critic Al Sharpton over the chokehold death of an unarmed suspect, suffered another hit with revelations a top aide is living with a convicted killer who has often mocked officers as pigs.(AP Photo/Mark Lennihan, Pool, File) (AP)
--

Outside of the tri-state area and the removed enclaves of experts on criminologists and civil liberties, Bill Bratton, the commissioner of the New York Police Department, is not a household name. Yet when the history of late 20th- and early 21st-century America is written, Bratton's name is likely to be prominently featured — especially in those sections about the country's increasingly urban nature and the rebirth of the American city.

That's not to say, however, that all of the write-ups for the man who brought "broken windows" policing to New York will be in his favor. Indeed, now that white Americans are increasingly concerned about how the nation's citizens of color are treated by its police, Bratton's legacy is becoming ever-more complex. Because although his first go-round as NYPD head is remembered for controversial policies like stop-and-frisk, his second turn at the department's tiller has been characterized by him reining in the very same policies that helped make his name.

That complexity and adaptability is a key feature of "Blue: The LAPD and the Battle to Redeem American Policing," a new book about Bratton by award-winning investigative journalist Joe Domanick. The book focuses on Bratton's tenure as LAPD chief, which was bookended by his former and current commissionership in New York; but Domanick is just as interested in the lessons Bratton's career may hold for the future of American policing. Recently, Salon spoke over the phone with Domanick about Bratton and the book. Our conversation, which has been edited for clarity and length, can be found below.

What made you want to write a book about Bill Bratton? He's been a prominent figure for quite a while but doesn't have a special reputation for charisma.

I would argue he is the most significant reformer of the past 25 years. He did a lot of good things for policing and he introduced a lot of bad policing strategies, [such as stop-and-frisk], which by the way he has done yeoman-like work trying to fix.

Why do you think he was willing to reverse himself on stop-and-frisk, which was one of his signature policies?

I think he realized that stop-and-frisk had turned into an absolute disaster for New York City. He introduced the mass stop-and-frisk [policy] and the strong implementation of "broken windows" [policy] when he was commissioner of the New York Police Department from 1994 to 1996. At that time, I would argue, both were necessary for a city out of control; a city that was experiencing over 1,000 murders a year; a city that was just frightened. What happened was, something that I think he envisioned as temporary grew to be something permanent.

You have a lot of complimentary things to say about Bratton in the book, but you're also extremely critical of stop-and-frisk. What is it about the policy — and the legacy of its implementation in New York — that you find so objectionable?

We know that stop-and-frisk is a very racist technique. We know that under [ex-Commissioner] Raymond Kelly, the NYPD stopped 680,000 in 2011 — almost entirely African-American and Latino between the ages of 14 and 24. It's so invasive and it's so repressive to young black males and poor Latino youth. It has proven to be a disaster, and he brought it to Los Angeles as well. Police departments around the country have copied it, this mass use of stop-and-frisk and "broken windows."

And yet he's been at the head of the NYPD during its move away from stop-and-frisk, too.

I give him a lot of credit for that. It cost him a lot in energy to do that, but it was an important thing.

Now [another] thing that Bratton did that is very positive is that he came to Los Angeles [after his first stint in New York]. The LAPD had historically been a very brutal, racist and unaccountable police department; and for 10 years, after the 1992 riots, LA had two police chiefs, both African-American, who failed equally spectacularly in turning the department around. But Bratton came in and really began changing the culture of the LAPD.

At this point, I think a lot of readers are familiar with the broad contours of the problems within the NYPD regarding civil liberties and so forth. So can you tell me a bit about what the LAPD was like when Bratton first showed up — and what he did to "change the culture," as you put it?

The second thing was, he introduced "community policing." He ... took smart, young captains in their divisions, and because each division is different, he allowed them to innovate and start community policing, which is really working with the people, the grassroots people and the grassroots leaders [of the community]. That was very successful, and Bratton gave permission for that to happen and made sure that he found the best people to make that happen.

You also write that he was willing to address — head-on — the issue of racism, which is a problem for most police departments but was especially an issue for the LAPD. Why do you think he was inclined to do that while others were not?

He's a cop who despises all the cop prejudice. He took advantage of a program in Boston that allowed officers to go to college; paid tuition and everything. He took advantage of that and learned a lot because he was there with people who think like you do, or I do — not just other cops. He learned from that. I do think he's learned from his wife, Rikki Klieman, a former defense attorney from Chicago, too.

The way he's presented in the book, he comes off like some with a preternatural ability to influence and manipulate institutions. Assuming you agree with that characterization, why do you think that's the case?

He's a problem solver, very intelligent, thinks strategically. He's not charismatic; he is not a grandstander. I'm not saying that he doesn't know how to bullshit. (He's a master of the media. A master. The best I've ever seen.) But Bratton learns from his mistakes, and he knows how to stay two steps ahead of everybody else.

Tell me more about his "mastery" of the media.

At a very young age he was essentially the media [liaison] to the Boston Police Commissioner. He had to handle the media and he learned how to do it. When he was in New York, for example, he learned that when he wanted to reach policymakers and politicians, he would [use] the New York Times. When he wanted to talk to his troops — his 35,000 guys — the best way to do that was to talk to the New York Post. Also, he was a cop. He was out there on the street. He understands cops, he knows how to communicate [with them]. He knows his audience.

Was he using those skills last year when trying to handle the fallout after the assassination of two NYPD? Back when cops were turning their backs to Mayor de Blasio? It struck me at that time that he was trying to thread the needle somewhat, but that he ultimately was concentrating on keeping the flareup from ruining de Blasio's tenure.

Bill de Blasio was the luckiest person in the world to have Bratton as his commissioner. Bratton still has a vast reservoir of good will in the NYPD from what he did in New York [in the '90s]. He used this very skillfully to walk a tightrope. I think that [when] he stood with de Blasio, that was a very important thing during that kind of furor. [De Blasio] was able to survive that and it's behind him now.

So what do you think will ultimately be Bratton's legacy? The rise of stop-and-frisk and "broken windows" in the '90s, or his temperance of both policies in the early 2010s? Or something between those two options?

Bratton was very important for what I consider the first wave of American policing reform. He was the leader of the first wave, making some big mistakes along the way. "Broken windows" can conceptually and practically be a very good thing. The problem is, how do you use it? You have to use it within the concept of community policing. Bratton understands that now, and I think he's trying to emphasize these things to his officers [to stop] having them hassle some guys playing checkers in the park, etc.

Now, there's a second, desperately-needed wave of [police] reform — and it's not coming from inside the police department. It's coming from African-American leaders, the Black Lives Matter [movement], and from a generation of millennials who are much more tolerant. That has to include a total commitment to community policing and really understanding that repression through stop-and-frisk has to stop.