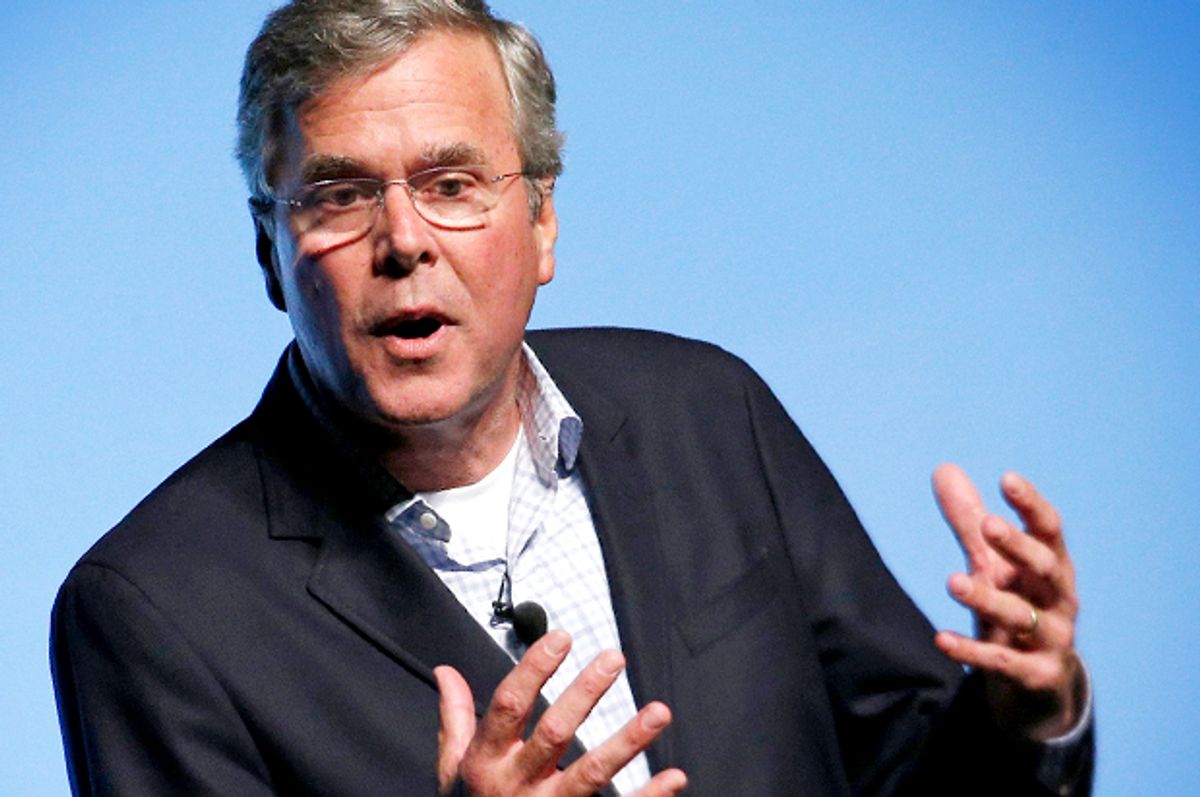 Jeb Bush gave us a preview of what his Middle East policy would like in a big speech at the Reagan presidential library last night, and what he presented was a happy, feel-good version of his George W. Bush’s failed neoconservative adventurism. As I wrote earlier today, Jeb is leaning hard on the myth that his brother’s war in Iraq was redeemed by “the surge,” which, he said, “turned events toward victory” in that misbegotten conflict. That isn’t true, but Jeb nonetheless sees value in the “surge” strategy and plans to use it to deepen U.S. military involvement in the Middle East. Make no mistake: Jeb Bush is planning for more war, and he’s promising sweeping changes across the region while being deliberately vague about how much it will cost the U.S.

With regard to Iraq and the fight against ISIS, Jeb criticized President Obama for “pursuing a minimalist approach of incremental escalation. The results have been a creeping U.S. involvement, without any strategic results – the worst of both worlds.” That’s a fair criticism, but Jeb’s alternate strategy is a proven recipe for disaster.

The plan he sketched out for Iraq involves arming and training Iraqi security forces, making arms available to Kurdish fighters, using U.S. air power to support Iraqi military operations, and working towards a diplomatic resolution to Iraq’s ongoing political strife. The Obama administration is already doing all these things. Where Jeb breaks from Obama is that he wants to expand the U.S. military presence (he doesn’t say by how much) and give our troops “a greater range of action” – meaning more leeway to do actual fighting. But, Jeb insists, “we do not need, and our friends do not ask for, a major commitment of American combat forces. But we do need to convey that we are serious, that we are determined to help local forces take back their country.”

So Jeb wants to quell Iraq’s internal warfare while simultaneously transforming its military into a capable fighting force and giving its government space to work out its crippling political divisions. George W. Bush spent several years trying and failing to do exactly that, and he had well over 100,000 troops in the country at any given time. Jeb wants us to believe that he can accomplish this feat with a much smaller U.S. military presence that serves mainly to convey our “seriousness.”

In addition to ramping up our troop levels in Iraq, Jeb is also planning to get us involved in the Syrian civil war. “Defeating ISIS requires defeating Assad,” he said last night, and it’s his grand design is to use “surge” tactics to topple the Syrian regime and help install “a stable, moderate government once ISIS is defeated and Assad is gone.” It’s the grand neoconservative vision, and it involves putting U.S. military personnel in Syria to establish “safe zones” inside the country and enforce a no-fly zone. How many American soldiers would be asked to join in the Syrian civil war? Jeb didn’t say. How long should we expect this conflict to last? He declined to offer a timetable. The only assurance Jeb could make is that he’ll succeed where literally everyone else has failed because he’ll show “strength” and “leadership.”

So that’s two wars President Jeb has committed us to, and if we’re lucky there may be a third in the mix. As Daniel Larison writes, Jeb’s plan “will necessarily put the U.S. in direct conflict with the Syrian government, and it will put the U.S. in the position of attacking the government that ISIS and other jihadists are fighting. The possibility that this could trigger a crisis with Iran doesn’t seem to occur to Bush, but he probably would see that as a benefit of this policy.”

I’m tempted to ask how Jeb would pay for two, maybe three open-ended military conflicts given that he’s also promising to cut taxes and balance the budget. Perhaps he could borrow another trick from his brother’s presidency and not pay for them at all while masking their true costs.