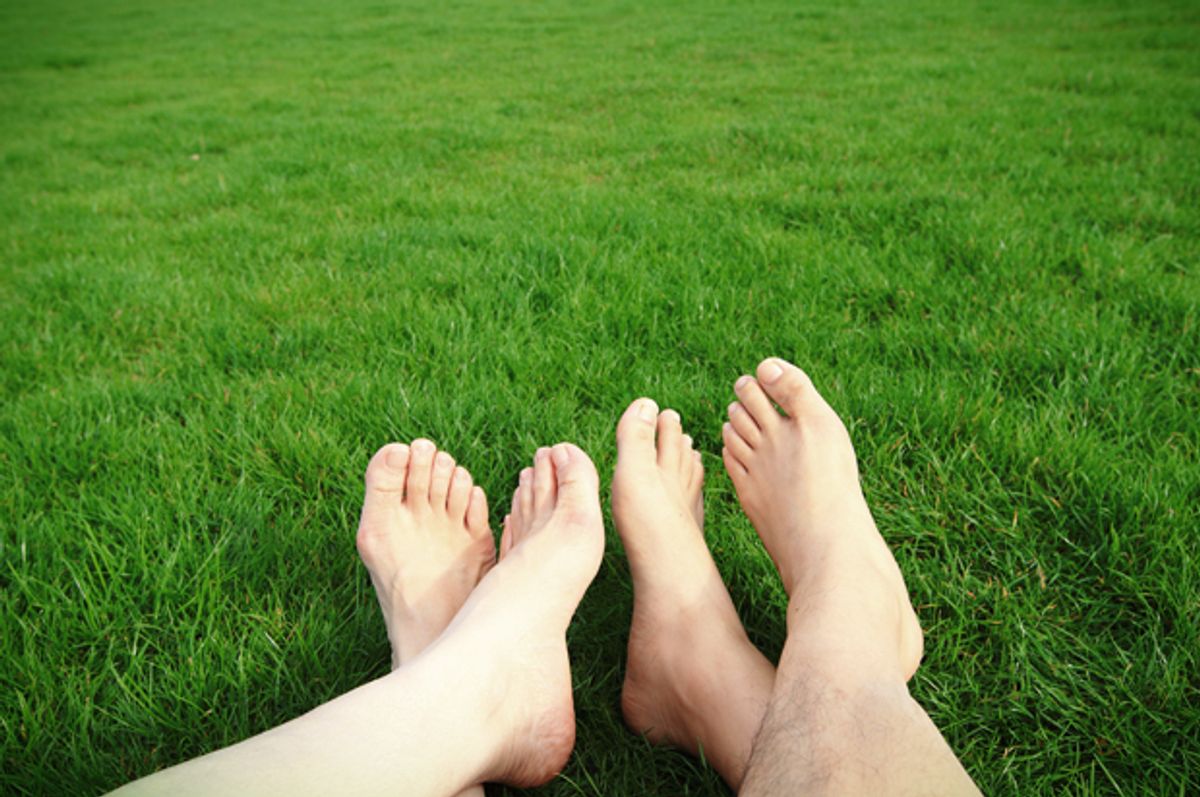 My wife and I live 30 miles east of downtown Los Angeles, in a small town that is pure conservative Americana, a loving relic of the 1950s: American flags hang from most homes, weekly classic car shows congregate in front of the village diner, and holiday decorating never, ever stops (sure, July 4 and Halloween and Christmas, but also Easter, St. Patrick’s Day, Mother’s Day, Valentine’s). In 2008, Palin signs beat out Obama by a margin of 5-to-1. Pickups sport cheerful bumper stickers: Nobama. American since DOB.

There are 15 homes on my block, 18 on the block across the street, and so on until you get more than a hundred houses on the blocks immediately surrounding my own. When my wife and I moved here three years ago, only four of those hundred-plus houses had drought-friendly lawns. Of course this came as little surprise, given the '50s nostalgia of the neighborhood; of course most homes had water-reliant grass lawns.

I’m from Tucson. There's hardly any grass in the desert, though I was lucky (or unlucky) enough to grow up with lawns. A dull chore of my youth was watering the coffin-size patch outside our trailer. After school I’d walk home, cutting through oleander and neighbors’ sideyards, through the fatty stink of griddle-cooked hamburgers wafting out of trailer kitchens. Flies plotted on window screens. I don’t remember doing much homework, but I do remember shutting the blinds for afternoon darkness and waiting for the hot sun to subside. When the air was finally reasonable, I’d go outside and water.

Generally I made a mess of it: I’d turn the hose on at a trickle and leave to play Nintendo at a friend’s. My great habit was forgetting entirely about the hose: I’d get home and the yard would be a mud sog and I’d get half yelled at by my mom. She only half yelled because it was too hot for real yelling and no one cared much about the grass. It was just there, a vague rumor of green life hidden within dead yellow stalks. We tried halfheartedly to tend it. Later, when we had a real house, a real yard, my mom insisted again on putting grass in our backyard. She didn’t care if it used a ton of water or was a huge pain to keep up: It reminded her of her childhood. That was enough.

While I personally don’t get nostalgic about lawns, I can understand why other people do. Walking around my neighborhood in the evenings, it’s clear there's a great comfort in grass: It calls to mind youths spent playing catch in the backyard. Running barefoot through sprinklers. Camping out at night. Times when things were simpler, softer, cooler and calmer. No wonder my mom wanted grass, even in Tucson. It wasn’t just a lawn – it was a visual echo of her childhood.

A couple my wife and I are friends with reinforces the point: This is a husband and wife who are eco-friendly to the point that the husband takes Navy showers (in which you splash yourself with water, turn off the flow, soap and shampoo yourself, then turn the water back on for a few seconds to rinse). They collect rainwater on the rare occasions it rains, and he installed a circulator system in his house during a recent bathroom renovation: The circulator keeps shower water in the plumbing system until the water warms, rather than wasting it down the drain. Yet, when they recently became parents, the first big change these two thoughtful people made in their home was to lay down an enormous blanket of sod in their backyard. For their child, they said. So he could grow up with a lawn just as they’d grown up with lawns.

In my small town, and throughout Southern California -- and even in our whole country -- we’ve lived nostalgically for a long time: It is a pleasant, slightly indulgent state of mind. But while on the one hand there is nostalgia, on the other is reality.

Reality, lately, is winning. The California water crisis is well-reported: not just the last four years of drought but the next 15, 20, 30. The haze of nostalgia is being burnt up by our warming world. It won’t do anymore to be sentimental about the past; the past is gone, now we have to adapt. We are. A desalination plant is being built in San Diego, with a second to follow in Long Beach. As of this summer, state-mandated fines exist for overwatering. Increasingly harsh rationing systems are being put into place by local communities. The university where I work has removed most water-reliant plantings, switching to drought-tolerant. And one of the first things my wife and I did when we moved into the neighborhood – despite the teasings of our grass-loving neighbors – was rip out our own grass. No more watering for us. No more mowing for me.

And it’s not just us. Last week we made a circuit through the neighborhood: The number of drought-friendly yards is now well over 20, and three more houses just in the last month have ripped out their sod. In less than three years, that’s more than a five-fold increase. This is good. It is, ironically, a sea change: Even here, in the land of Palin, people are setting aside their daydreams of the past and realizing that the future is not only going to be hard, but it’s already here.

Sean Bernard is an associate professor of creative writing at University of La Verne. His first novel, "Studies in the Hereafter," is forthcoming in August from Red Hen Press; his collection "Desert Sonorous" won the 2014 Juniper Prize.