"Dune," climate fiction pioneer: The ecological lessons of Frank Herbert's sci-fi masterpiece were ahead of its time

The Hugo and Nebula Award-winning novel turns 50 this year 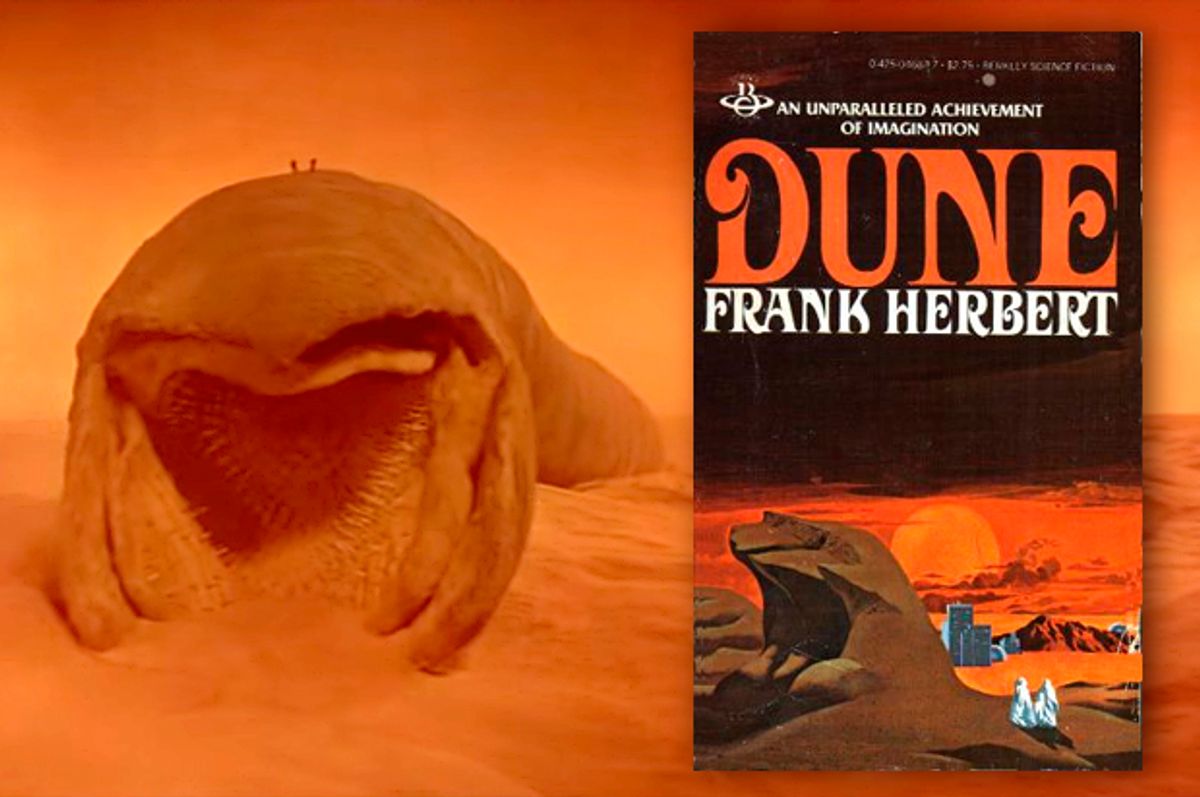 Frank Herbert's "Dune" turns 50 this year. Given the growing popularity of mainstream and science fiction concerned with climate change and other ecological issues, maybe it's time the epic space adventure novel received a renewed measure of respect.

Oh, "Dune" has received plenty of attention over the past five decades. It's been called the greatest science fiction novel of all time and won a Hugo and a Nebula, the top awards in its field. It may even be the best-selling novel in its genre. But still there's something about "Dune" and its major and minor sequels and prequels that has so far failed to capture the popular imagination as firmly as Tolkien's "The Lord of the Rings," Martin's "A Song of Ice and Fire" or even Lewis' "The Chronicles of Narnia."

That trend may shift, however, now that there is a renewed interest in literature – science fiction and otherwise – that explores the effects of a changing global climate. Every season in publishing seems to bring a new set of doomsdays, and dystopian/apocalyptic fiction has never been so plentiful. Much of it depends on familiar landscapes being ravaged by drought, rising seas and other environmental disasters, and "Dune" stands as an important early example of a novel that explored ecology and environmentalism and brought those ideas to a young and influential new audience.

"Dune" chronicles the coming-of-age of 15-year-old Paul Atreides, son of Duke Leto, who has been sent by the Emperor of the universe to rule over the desert planet Arrakis. Arrakis is the only source of melange, the priceless spice/drug that not only prolongs life and expands human consciousness, but makes interstellar travel possible. It's the ultimate precious natural resource, a substance on which an entire empire depends.

Lady Jessica, Leto's concubine and Paul's mother, is a member of the Bene Gesserit, an ancient order of female psychics who seek to influence history through eugenics. Over the course of the book, it becomes clear that Paul is the "Kwisatz Haderach," a male offspring able to manipulate time and space with the powers of his mind. Betrayed by a close associate and left at the mercy of the Harkonnens, a rival family determined to rule Arrakis, Paul and Jessica flee to the desert, home to gigantic sandworms, where the tenacious Fremen eke out a hardscrabble existence among the dunes by worshiping water while wearing "stillsuits" that recycle all of their bodies' moisture. Paul, rechristened as Muad'Dib, seems fated to become a messianic figure, who may eventually lead the Fremen on a disastrous jihad.

What sets "Dune" apart from the space adventures of the time is the amount of meticulous detail Herbert brought to the task of world building, and how he managed to layer his saga with well-chosen elements of religion, politics, mythology and ecology. A reporter for the Seattle Post Intelligencer, the San Francisco Examiner and other West Coast papers, Herbert was inspired by a visit he made to Florence, Oregon, where sand dunes were creating havoc by drifting across roads and into buildings. The United States Department of Agriculture began planting European grasses on the dunes to stabilize them, and Herbert, planning to write an article titled, "They Stopped the Moving Sand," charted a plane to observe the projects progress. His research led him to consider why deserts were so often home to messianic figures.

After the novel appeared in serialized form in the science fiction magazine Analog, Herbert and his agent tried to interest publishers in producing it as a single, unified novel. More than 20 publishers turned it down, until Chilton, known for its car maintenance manuals and possessing an expertise is printing large books, took a chance on it.

"Dune" has all the accouterments that dyed-in-the-wool nerds adore: appendices with lengthy treatises on Arrakis' ecology and religion; mini profiles of various planetary royalty; a glossary; and, of course, a map. Its influences range from T.E. Lawrence to Carl Jung to Rachel Carson, author of the environmental wake-up call "Silent Spring."

Gerry Canavan, assistant professor of English at Marquette University and co-author of "Green Planets: Science Fiction and Ecology," sums up the novel's legacy well when he writes in an email interview, "'Dune' is really a turning point for science fiction that takes ecology seriously as a concept."

Frank Herbert's son would be among the first to agree with that assessment. In "Dreamer of Dune," his 2003 biography of his father, Brian Herbert recounted many instances that demonstrated his father's interest in environmental issues, including his backyard experiments with solar and wind power.

In a telephone interview from his home near Seattle, the younger Herbert said, "In 1970, on the First Earth Day, Frank Herbert spoke to 30,000 people in Philadelphia and he told them, 'I don't want to be in the position of telling my grandchildren, 'I'm sorry, there's no more Earth left for you. We've used it all up.'"

With Kevin J. Anderson, Brian Herbert collaborates on a series of prequels ("Sandworms of Dune," "Mentats of Dune") that extend the Dune saga centuries back in time. Herbert also writes novels and short fiction on his own, and they frequently reflect his interest in ecology and environmentalism. His novel "Ocean," written with his wife Janet, imagines the day when marine life turns against humanity. "The Little Green Book of Chairman Rahma" posits a time in which the U.S. Government has been overthrown and the environment has been saved.

Brian Herbert remembers his father's gift for extrapolation and his unwillingness to be complacent about finite resources. "Dad did not want us to assume that the way we live today would last forever. He thought that was a myth."

Many of today's science fiction writers grew up with "Dune" and remember it fondly. The late Octavia Butler, who wrote her own tale of ecological disaster in "Parable of the Sower," was a fan. British literature professor and science fiction author Adam Roberts has called it his "gateway drug" to the field. Paolo Bacigalupi, author of "The Wind Up Girl" and "The Water Knife," set in a drought-ravaged Southwest, counts it among his favorite books. His water-starved characters use "Clear sacs" to recycle urine into water, a scenario not too far from the Fremen's "stillsuits," which capture and protect every drop of human moisture.

"Dune" is not universally revered, however. Sherryl Vint, professor of English at University of California, Riverside, says, "Recent readers are put off by the sexism of the novel in a way that I think didn't bother earlier readers. And more recent criticism has realized how imperialist it is."

Asked to identify writers influenced by "Dune," Vint says some critics point to microbiology professor Joan Slonczewski, whose novels contain themes counterpoised to those in Herbert's work. "If 'Dune' is about a desert world and struggles of patriarchal culture, 'Daughters of Elysium' is about a water-based world/culture and feminist values."

Although their styles and concerns are vastly different, it is easy to see a connection between Herbert's magnum opus and the work of Kim Stanley Robinson, author of "2312" and "Shaman." Robinson is the more nuanced and graceful writer, but his Mars Trilogy, in which the Red Planet is terraformed into a place that can sustain human life, owes a debt to the planet-altering ways of the Fremen in "Dune."

During his stint last year as a participant on NPR's Science Friday Book Club, Robinson spoke of first reading "Dune" as a college student on a road trip through the desert. “I would read by flashlight, I would read in tents, I would read in the backseat of the car when other people were driving,” he said. "I was very impressed [by 'Dune']."

When "Dune's" "planetary ecologist" Leit-Kynes lies dying in the desert of Arrakiss, he recalls the words of his own father: "The highest function of ecology is understanding consequences." That sentiment could just as easily be found in Robinson's new novel, "Aurora." Set on a generation starship heading from Earth of Tau Ceti with a passenger load of more than 2,000 human inhabitants, the book does an exemplary job of demonstrating how each crewmate is dependent on the actions of the others and how the tiniest input can have result in disastrous outputs.

Otto considers "Dune" of particular importance, "for its extremely close attention to the science of ecology and the complex ways that culture, society, politics, religion, and the non-human world intertwine."

In comparing "Dune" to the Golden Age science fiction that had preceded it, Canavan said, "I love [Isaac] Asimov, but if you think of something like his imperial capital Trantor – a city the size of an entire planet – you realize that there's really no way such a thing could be ecologically feasible. The logistics and bureaucracy required to ship water, food, and materials in and waste out – day in and day out – would be unimaginable."

"Dune" has a much more sparse ecosystem, but Herbert explores how the limitation of water would transform a planetary ecology and determine whether it could support human life.

Canavan says, "Most of the works of its era weren't thinking in these terms at all, essentially imagining that technological progress would render all ecological limits irrelevant."

"Dune" does appear to have inspired work on technical innovation to deal with ecological limits. As reported for the online science magazine Nautilus by Andrew Leonard, academics in drought-ravaged California are partially emulating the water-saving ways of the Fremen by experimenting with "fogcatchers," devices that pull and collect moisture from the air.

Herbert's Fremen are all about achieving balance, and Otto sees "Dune" as a literary precursor to the permaculture movement, "that effort on the part of farmers, architects, economists, teachers, and others to build a society in which we scale our use of resources to their local availability." Herbert experimented with solar heating, methane collection and wind power. Those enthusiasms spilled into the "Dune" books and are reflected in the philosophies of the Fremen.

Otto says, "[They] live this way – ecologically, sustainably – out of necessity. They are forced to live on the resource-scarce Arrakis. Today's permaculturists understand that we cannot endlessly consume on a finite planet. So like the Fremen, who have a number of 'permacultural' technologies, we also need technologies that integrate us into ecosystems."

Gerry Canavan agrees that "Dune" initiated a growing interest in science fiction that grapples with environmental issues. "Readers often try to use science fictional speculation as a way of imagining what that future will be like or how we might intervene now to prevent it."

Otto acknowledges that his students exhibit a growing interest in science fiction that grapples with environmental issues, "particularly if the fiction is discussed with an eye toward what students can do in their own lives to make a difference." "Dune" is a great book for having those conversations, he says.

It's unlikely that humanity's future will look anything like what is presented in Frank Herbert's odd masterpiece. But as "Dune" celebrates its golden anniversary, it stands as a piece of literature with far-reaching influence, inspiring new generations of readers, writers and scientists to look at their own planet in a different light.