Pope Francis goes to Washington: Why congressional GOPers are about to get a papal smackdown

When the pontiff addresses Congress later this month, Republicans should be prepared for the worst 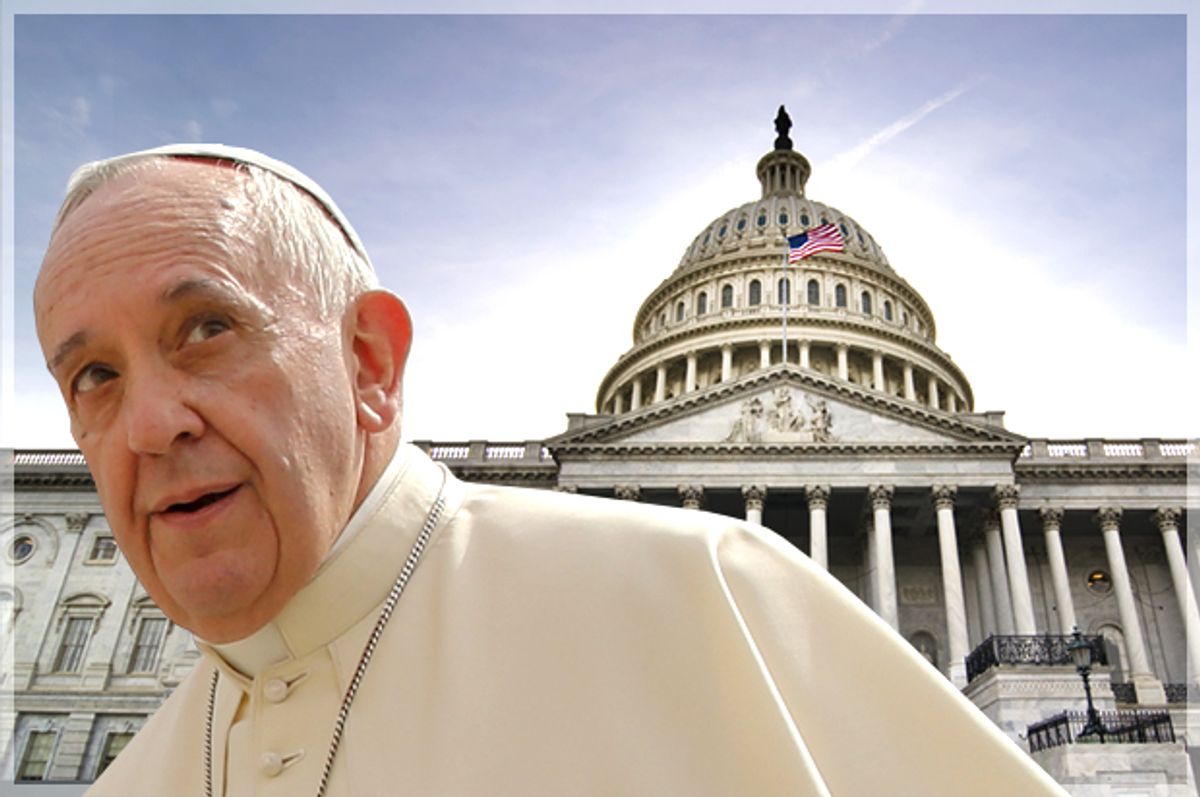 When John Boehner announced in March of 2014 that he had invited Pope Francis to address a joint meeting of Congress, it seemed like a great idea. The popular pontiff had been in office for just one year and his doctrinal persona was still somewhat of a tabula rasa. Sure, he had condemned “trickle-down” economics as an unproven theory that “expresses a crude and naïve trust in the goodness of those wielding economic power.” But he had also spoken out strongly against abortion and signaled that he had no intention of changing the Catholic Church’s signature conservative teachings on issues like gay marriage. And his very popularity seemed to auger well for the insistence of many in the GOP that religion should be at the center of public life.

And when the pontiff accepted the invitation in early 2015, it seemed like a coup for the GOP. Boehner clearly saw an opportunity to marry some of Francis' rhetoric about caring for the poor and less fortunate with Republican economic doctrine, to reframe it as “compassionate conservatism” much the way that George W. Bush did to appeal to Catholics and moderates worried that the party’s policies toward the poor were too harsh.

“His tireless call for the protection of the most vulnerable among us—the ailing, the disadvantaged, the unemployed, the impoverished, the unborn—has awakened hearts on every continent,” said Boehner. “Many in the United States believe these principles are undermined by ‘crony capitalism’ and the ongoing centralization of political power in the institutions of our federal government, which threaten to disrupt the delicate balance between the twin virtues of subsidiarity and solidarity.  They have embraced Pope Francis’ reminder that we cannot meet our responsibility to the poor with a welfare mentality based on business calculations.”

But now, as the date of the pope’s historic speech approaches, more and more members of the party are bracing for what some are predicting could be a very bumpy ride on Sept. 24.

In the past year, Francis has emerged as a proto-socialist who leaves no doubt about where he stands on the current economic system. He has criticized capitalism as the “dung of the devil” and the foundation of a fundamentally unjust world order that leaves the poor and marginalized struggling to obtain “so elementary and undeniably necessary a right as that of the three ‘Ls’: land, lodging and labor.”

Not only has he blown a hole in longtime Republican efforts to suggest that free-market capitalism is the answer to helping the poor both in the U.S. and in the developing world; Francis has also linked this immoral capitalist system to the unsustainable exploitation of the planet. In his climate change encyclical "Laudato Si," he not only calls out climate deniers for failing to heed the “very solid scientific consensus indicates that we are presently witnessing a disturbing warming of the climatic system,” but explicitly denounces the belief of many on the Christian right that God had given man “dominion” over the earth to exploit its resources as they see fit.

“Our ‘dominion’ over the universe should be understood more properly in the sense of responsible stewardship,” said Francis.

So Republicans can expect to have to sit and listen to one of the most respected and beloved voices on the planet extricate an economic scheme that has been at the center of their identity since Ronald Reagan, call for immediate action to reduce the use of their beloved fossil fuels, and lobby for a massive redistribution of income.

And that’s before he even gets to immigration. Catholic candidates like Jeb Bush and Marco Rubio had tried to stake out a relatively moderate position on immigration that reflected the longtime emphasis of the church that undocumented immigrants should be welcomed. But they abandoned that even before Donald Trump joined the party and got the GOP candidates competing to see who could build the biggest wall to keep out migrants.

Francis, on the other hand, has made compassion for migrants around the world a hallmark of his papacy. He has decried “racist and xenophobic attitudes” regarding immigrants and called on the U.S. to implement more humane policies along the U.S.-Mexican border, saying the number of undocumented immigrants, particularly children, fleeing poverty and violence is a “humanitarian emergency.” One of his key Vatican allies on an advance trip to Washington said recently that if time had allowed, Francis would have liked to enter the U.S. via the Mexican border to make the ”point about welcoming immigrants, not building walls to keep them out.”

To be sure, the Vatican has been clear that Francis’ speech won’t be about dressing down any one party. And some have suggested that Democrats are just as vulnerable to criticism from Francis on the issue of abortion. But Democrats are confident that their agenda lines up with the social justice teachings of the church much more squarely. “Whether it's climate change or hunger or taking care of the poor, the Pope's message is really the embodiment of what Catholic social teaching has been about, historically,” Rep. Rosa DeLauro, D-Conn., told the AP.

DeLauro has long been at the forefront of efforts to highlight Catholic Democrats’ alignment with Catholic social teaching and to place the party’s support for abortion rights within this context. In 2006, she corralled 55 pro-choice and pro-life House Democrats to sign a "Statement of Catholic Principles" that called for social justice-based policies aimed at reducing poverty and “the number of unwanted pregnancies,” expanding universal health care, and “taking seriously the decision to go to war.” To DeLauro and many others, it sounds like something Pope Francis would say.