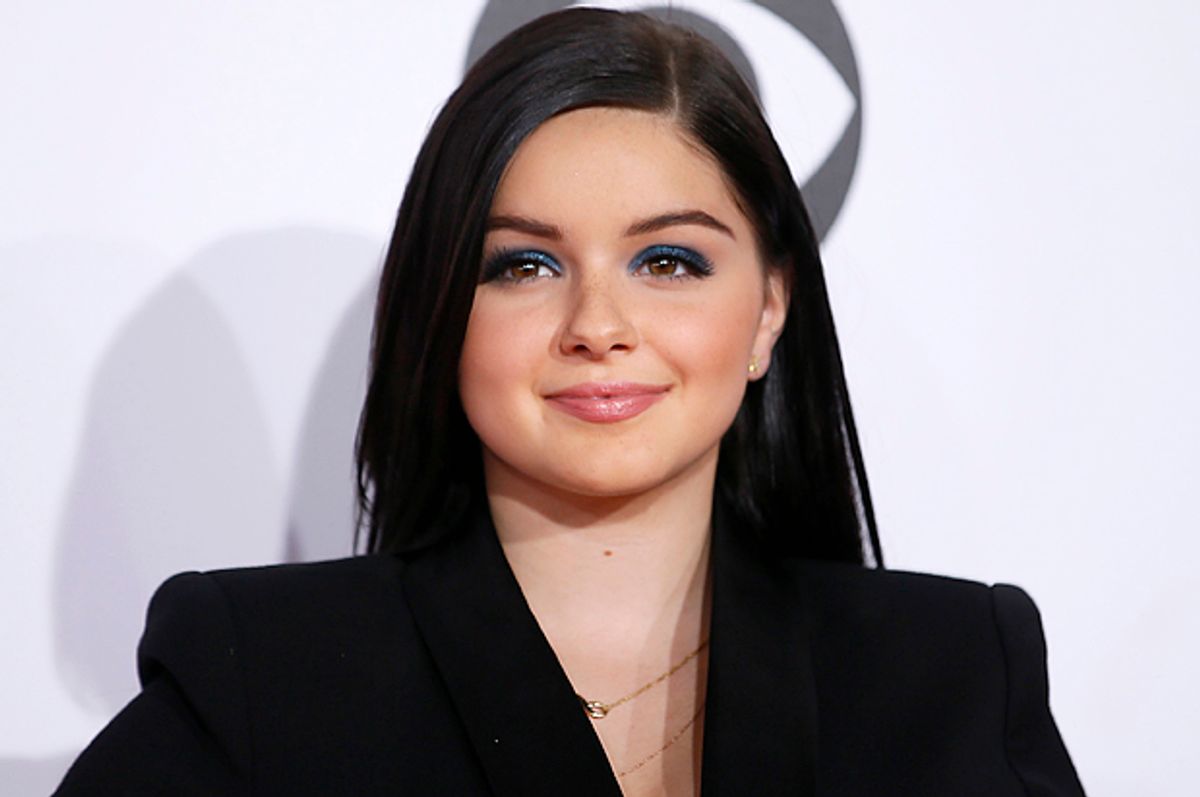 What I'd prefer right now is to not have us in a place where a 17 year-old girl's breasts are a headline-generating topic at all. But since that horse left the barn a long time ago, let's see if we can at least move in the direction of using this as an opportunity to be less creepy going forward.

In an interview in the new Glamour, "Modern Family" actress Ariel Winter reveals her recent decision to have breast reduction surgery — and the very public commentary about her body that preceded it. The 5' 1" actress says that the sudden and dramatic changes in her body made her at times "hurt so bad that I couldn’t take the pain," and that she had a few similarly shaped cousins who'd already blazed the trail by having the procedure. But though she stresses, "I got it for myself," she does also discuss the rude observations she's received over the past few years for her figure.

"We live in a day and age where everything you do is ridiculed. The Internet bullies are awful," she explains. "I could post a photo where I feel good, and 500 people will comment about how fat I am and that I am disgusting…. I wasn’t feeling so happy…. It’s hard when you’re a teenage girl and you already have a lot of ridicule and then you pile on more, and it's kind of… it just gets too much."

She adds, "It made me feel really uncomfortable because as women in the industry, we are totally over sexualized and treated like objects. Every article that has to do with me on a red carpet always had to do with 'Ariel Winter’s Crazy Cleavage!' Or 'Ariel Winter Shows Huge Boobs At An Event!' That’s all people would recognize me by, not, 'Oh, she does great work on Modern Family.'"

That's an accurate assessment. A 2014 red carpet E! report from the SAG Awards declares that "Ariel Winter's Cleavage Is Out of Control," leaving plenty of open opportunity for the commenters to declare the then 15 year-old "motor boat city" and call her "trash." And at last year's SAG Awards, InTouch ogled that the now 16 year-old's "cleavage proves she's all grown up" by "showing off her incredible curves," while E! once again marveled at her "sexy look" as she "rocks crazy cleavage… while flaunting her tiny waist and big bosoms." (The same "writer" this week ogled another female performer as she "flaunts boobs and skinny figure.") And Winter says that "Even at 14, people would ask me, 'Do you have fake boobs?' But we live in a society that that’s what they think about."

A girl doesn't magically become a woman on her eighteenth birthday, and other teen stars have also grappled with the seemingly endless speculation about their bodies, and by extension, their sexuality, as they've grown up in public. Kylie Jenner's 18th birthday, just this week, all but set off a frenzy of relieved, brakes off ogling over her "barely legal," "newly legal" and "finally legal" (all actual entertainment site headlines) status.

Teenagers are not children. But they're not adults either, and the narrative of their development, both physical and emotional, should be theirs to write. Calling her "fat" is gross, but guess what? Slobbering over how sexy she has become is gross too. It reduces a girl who's still growing and changing into an object for judgment, a creature to be assessed based on her perceived hotness and the ampleness of her assets. And even if you're a red carpet reporter, you really can just say that a female —  of any age, in fact — looks pretty without making it into an invasive conversation about her individual body parts.