I spent a week in the world's top bike cities, and I never wanted to come home 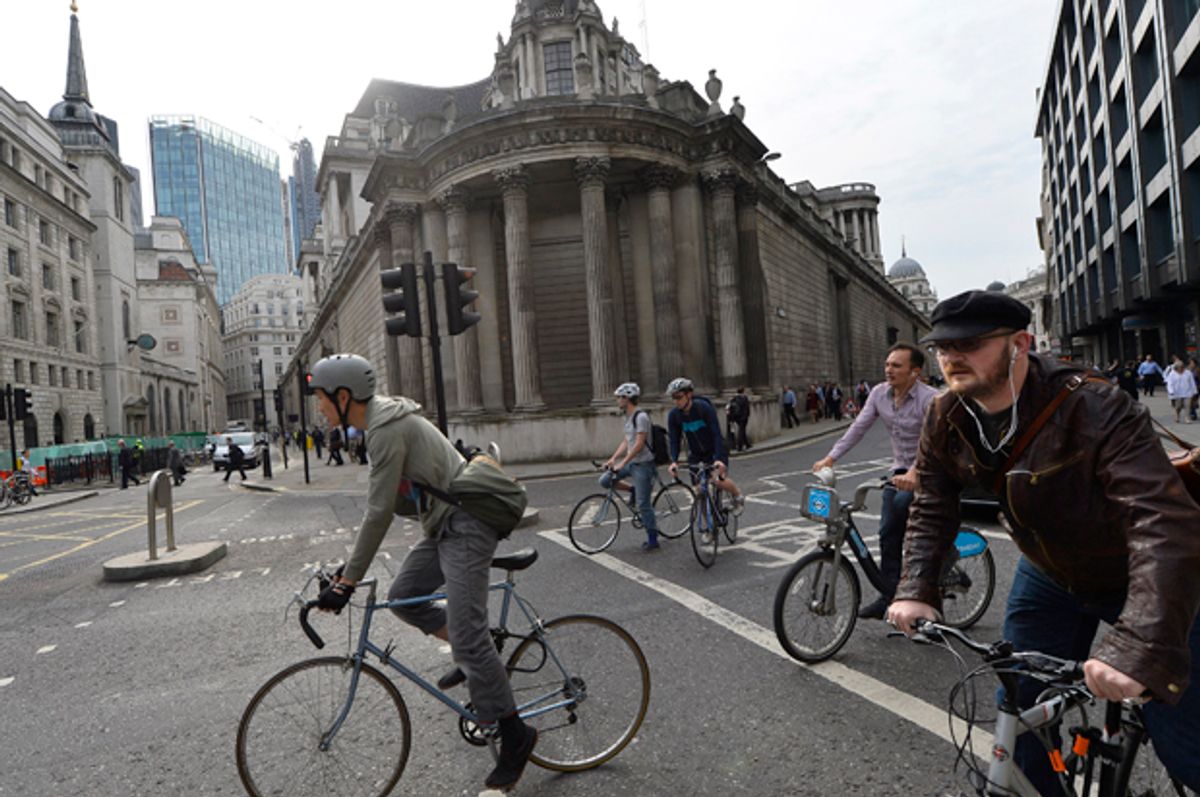 My week and a half in Europe passed in a heady blur of parks and sidewalk cafes and long days exploring the unfamiliar streets of cities in the peak of summertime gaiety. Traveling with my younger brother through Iceland, Copenhagen and Amsterdam, we knew everyday life in these far-off lands couldn't be as good as it seemed. But it sure looked enticing. We saw free-roaming sheep scattered precariously across steep mountainsides. We saw couples our parents' age splitting joints in coffee shops, kayaked past an old man feeding ducks and herons from the back door of his houseboat. I ate a hot Belgain waffle covered in Nutella. I swear, it never got hot, and it almost never rained. And nearly everywhere we went, we went via bike, as if it were the fastest, cheapest and most efficient way of getting from point A to B.

Yes, if you haven't figured it out already, this is going to be one of those articles where the author goes to Europe and waxes poetic on just how much better they do things over there. But indulge me, if you will -- if not on the lax open container laws and generous parental leave policies, then at least on bike culture. Because if you haven't seen what a real bike city looks like, you don't know what you're missing.

I didn't intentionally set out to visit the world's No. 1 and 2 best bike cities, although cycling was certainly on the agenda when I booked my tickets. And I had no way of anticipating what it would look like when an entire city is designed to prioritize two-wheeled transportation. I had thought that I'd lived in bike cities before. I spent a year in D.C., where I zipped past cars and around traffic circles to arrive at work each morning. Or rather, as I now realize, where I squeezed myself past and around bumper-to-bumper traffic and narrowly avoided death on a daily basis, helmet tightly fastened, entire body on alert to oncoming hazards, trips torturously rerouted to include, for as much of them as possible, the semblance of a bike lane. Back in New York, I gave up the commute, clinging instead to the strip of paths that will get me around Central Park or up and down the waterfront on the Brooklyn and Manhattan sides of the East River, but rarely to practical destinations like a supermarket, or my midtown office.

"In America, you're seen as somewhat weird if you ride a bike," commented a friend who'd grown up in Copenhagen and recently spent time living in New York -- his exposure to America so skewed left that he asked me, with honest perplexity, how anyone in the U.S. could support Donald Trump. In Copenhagen, where 45 percent of residents arrive at work or school via bike, there's nothing "alternative" about it. There's nothing dangerous, or adventurous or even sexy about it. The rental I procured was similar to what I saw most residents riding: a clunky frame with upright handlebars, an oversize basket in front and back-pedal brakes. Riders didn't weave; they kept to the right, keeping pace in orderly lines and passing one another, when needed, with a courteous ring of their bell. They never ran lights. Mothers balanced babies in rear-mounted seats, and pushed children piled into the fronts of cargo bikes. No one wore helmets.

Bikes were given their own, generous share of the road, their own traffic signals. We had to get used to looking twice before crossing the street: once for oncoming vehicles, and again for oncoming bikes. Mesmerized, I took this video from the sidewalk -- it's slightly misrepresentative, as the road was being paved and so was closed to traffic, but the stream of bikes making use of the raised bike lane was typical. Picture the occasional car passing through the center lane, and you'll get the idea:

Amsterdam was similar, if busier: There were many more tourists struggling to get their bearings, and road space was shared not just by bikes and pedestrians, but also trams, leaving even less space for cars. The city boasts four times as many bikes as automobiles. It has more bikes, even, than people.

It’s impossible not to fall slightly, and blindly, in love with a country when you're not trying to actively live there. In Iceland, a country powered by renewables, I found myself wishing that the entire world had such ready access to geothermal energy -- until my guide started pointing out the sites of the country's past volcanic disasters, and I remembered that there's a considerable downside to Iceland's unique geological makeup. Likewise, the first question I got when I called home to enthuse about bike culture in Denmark and Holland was, "What happens when it rains?"

"The Dutch all bike in the rain," an Amsterdam local assured me as we dined side by side at a neighborhood Moroccan restaurant. "They bike in snowstorms. It's just our culture: it's easy, it's affordable, it's healthy."

I didn't quite believe that last part, given the tendency I'd observed for the Dutch to steer their bikes with one hand while holding lit cigarettes in the other. But some quick Googling confirmed that the Dutch and the Danish aren't intimidated by the elements. And my new friend's explanation for why this was so left me at once envious, and dismayed. Because if what it takes to get people out on bikes is some deep, engrained attitude that it's just what you do, then I couldn't imagine bicycling ever truly taking off the U.S. the way it has there.

But to suggest that some cultures are just naturally more drawn to biking to skip over one very important fact: if biking is so easy and cost-effective in Amsterdam and Copenhagen, it's because those cities have invested an enormous amount of money and planning into making it so. All cities, before cars took over, were bike cities; it took action, on the part of activists and politicians, for these two to remain that way. In the 1950s and '60s, writes Renate van der Zee in the Guardian, Amsterdam very nearly succumbed to the influx of cars, until the high number of traffic casualties, many involving children, lead to the creation of a pro-bike movement. The Netherlands' already strong cycling tradition helped this movement gain traction, but it was only one factor; urban planning that prioritized bike transport was what kept the public pedaling.

Copenhagen, too, made a concerted effort to embrace bikes during this time period. And its success as a bike hub depends on continued investment in infrastructure. Here's Austin Troy, writing in Slate in 2012, about what that looks like:

Biking in Copenhagen is easy and fast partly because of the city’s amazing investment in bicycle infrastructure. With more than $10 million in annual investments (20 to 25 percent of the road budget), the results are stunning. In addition to 397 kilometers of combined cycle tracks, lanes, and greenways and almost 35,000 bike parking spaces on roads as of 2008, the city has implemented some innovations for bikes, such as the so-called “green wave,” in which traffic lights on several main arteries into the city center are synchronized during rush hours for the benefit of bikes. This means that bikers can maintain a comfortable 20-km-per-hour cruising speed without putting a foot down to stop for a light for up to 6 kilometers. And on one of the busiest of those routes, they’ve closed down the road to car traffic.

...No matter how safe, fast, convenient, and inexpensive bike commuting can be made, however, it won’t be adopted if it can’t at least partially out-compete cars. So, beyond the “carrot” of incentivizing bicycle commuting, Copenhagen (and many other European cycling cities) also employs the “stick” of policies designed to discourage car use. Some of these policies are actually national—for instance, Denmark imposes a tax of 180 percent on car sales (which is not as bad as it sounds, given the $20-per-hour minimum wage), and gas costs almost $10 per gallon. Every year 2 to 3 percent of parking spaces are removed to gradually wean residents from auto-dependency. In addition to being scarce, parking is expensive—about $5 an hour in the city center. And as the inconvenience and cost of parking increase, so, too, does the rate of bicycling.

To the carrot and the stick, Grist's Greg Hanscom, who like me fell head-over-heels for Copenhagen's bike culture back in 2013, adds the "tambourine":

On Queen Louise’s Bridge, the city has installed a bike counter that ticks off the number of cyclists that have passed each day, giving riders a sense that they’re part of a movement, not just lost in the crowd. At many intersections, the city has installed footrests for cyclists waiting at red lights emblazoned with friendly messages like, “Hi, cyclist! Rest your foot here … and thank you for cycling in the city.” But the most innovative of all is the “bike butler” program: brightly clad city workers who tidy up the bike parking areas, and will even do minor repairs while the owners of said bikes are away.

(I made use of some of those footrests; but, unused to getting treated well as a cyclist and unable to read the language, I was convinced they must have been put there for some other purpose.)

This investment pays off: By factoring in the health benefits of cycling and the societal ills caused by cars, a recent analysis of Copenhagen's approach to transportation found that every kilometer traveled by car costs society .15 euros, while society earns .16 euros for every kilometer traveled by bike. "If we want people to cycle, then we have to change our approach towards urban infrastructure," the author of that paper, Stefan Gössling, told Fast Company. "Cyclists will only cycle [in large numbers] when they feel physically safe and when it's fast, which means they need to be physically separated from cars."

They also need to be able to maintain that feeling of speed and security for the entirety of one's trip. In Copenhagen, we never had to second-guess whether our bikes would be able to take us where we wanted to go; we even rode 45 minutes north of the city to a forest, following wide, clearly marked bike lanes the entire way. Conditioned as I've been by Dupont Circle, I worried, for most of the trip, about a traffic circle the map warned we'd encounter -- but that, too, included space for us, and we were through it and our way as if it were nothing. Compare that to these clever, disjointed maps drawn by Emily Badger and Christopher Ingraham at the Washington Post, depicting the D.C. city grid from a cyclist's perspective: unless you're prepared to leapfrog through traffic as you move from one stretch of bike lane to another, the city can hardly be considered accessible.

I don't really have a desire to move abroad, though I know that means I may never get to experience life as a permanent member of a real bike city. But tough as it is to adjust to life post-vacation, I'm holding out hope that the U.S. may one day evolve past its current, car-centric culture. While nowhere near the levels of the cities I visited, bike commuting in this country is on the rise, having grown 60 percent between 2000 and 2012; in Portland, where investment in bike infrastructure is a priority, the commute rate jumped from just 1.8 to 6.1 percent in that time. Small and midsize cities, already safer due to their lower levels of automobile traffic, are seeing strong bike growth as well. And with millennials getting behind the wheel at significantly lower rates than generations past, this may finally be the time for America to come into a bike culture of its own. To be on our way, we're just going to need a bigger push.