Campus PC panic is getting ridiculous: Here's what a "trigger warning" really looks like — and what it does for students

A professor's job is not to surprise, humiliate or traumatize students—but you wouldn't know it from the backlash 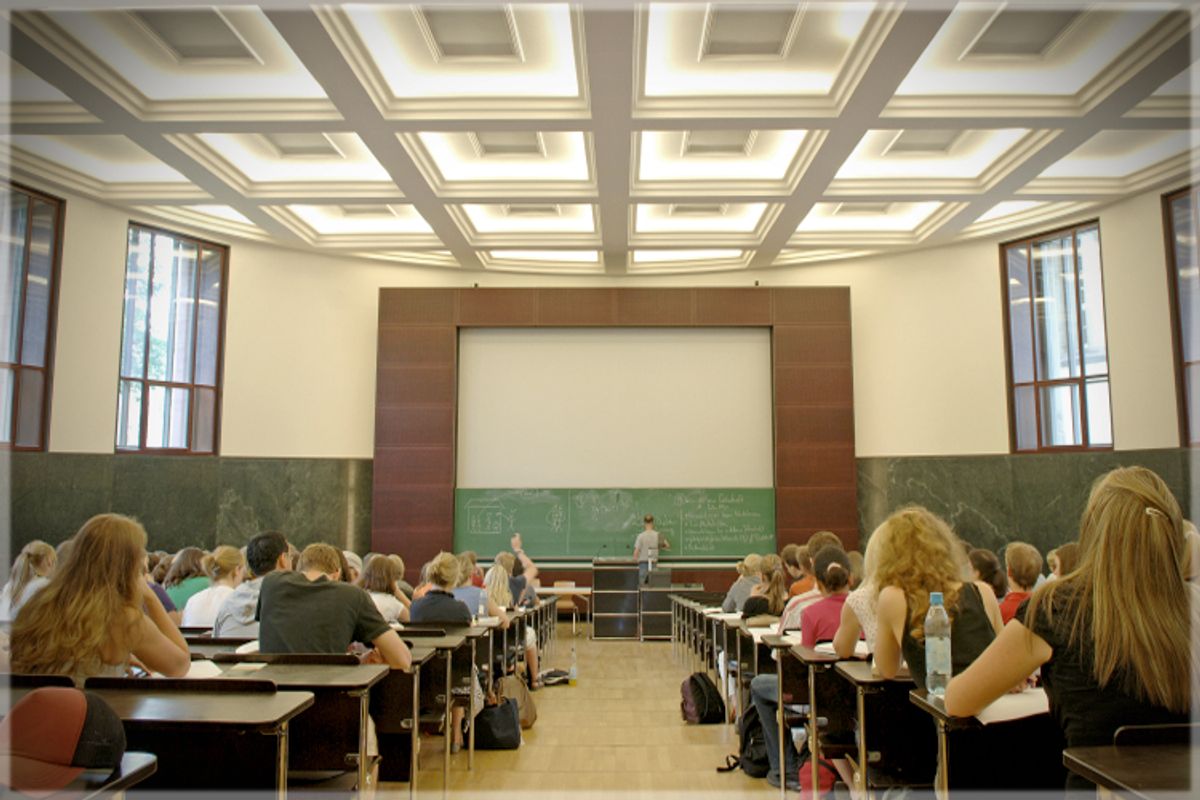 Thanks to Greg Lukianoff and Jonathan Haidt, the reading public has been treated to yet another installment in the ongoing jeremiad against trigger warnings, microaggressions, and the (debunked) culture of political correctness on American college campuses. Published in the September 2015 issue of The Atlantic, “The Coddling of the American Mind” picks up where Jonathan Chait, Laura Kipnis and the anonymous “liberal professor” – “terrified” of his students – left off.

In other words, it’s more of the same paranoid claptrap, substantiated with yet another recitation of the same tired anecdotes. Though my disagreements with the piece could run for pages, I’ll attempt to distill my objections.

Lukianoff and Haidt peddle the notion that the problems of modern campus culture stem from millennials’ coddled upbringing by the so-called helicopter parents. Left unexamined is the possibility that, while many present-day college students may have spent more time staring at a computer screen than scraping their knees and crashing their bikes in some idyllic postwar Levittown, their childhoods may not have been any safer as a result. That, instead of being taunted by neighborhood bullies on some bucolic playground, they were instead being brutally harassed by middle-aged trolls in the comments section of Tiger Beat. That, perhaps millennials’ preoccupation with social and cultural safety stems not from an overabundance of the latter but rather from its absence.

The authors try to substantiate their belief in the absurdity of 21st century campus culture by pointing to distorted and de-contextualized stories, for example referencing the infamous "water buffalo incident" at the University of Pennsylvania, without grappling with the latter institution’s long-standing history of racism and racial hostility to the West Philly neighborhood in which it sits, or invoking Laura Kipnis’s Title IX investigation without going into detail about the controversy surrounding alleged errors in Kipnis' essay, as well as how the university handled the complaints.

And Lukianoff and Haidt leave readers outside of academe with the impression that present-day college syllabi are literally dripping with trigger warnings. Let me say unequivocally – and using proof every bit as flimsy and anecdotal as theirs – that I see no evidence of this. In six years as a college-level course instructor at a major American research university, and in the same number of years as a doctoral student in a dual-title Women’s, Gender, and Sexuality Studies program – ostensibly one of the hotbeds of political correctness – I have yet to encounter a single classroom trigger warning.

What I have seen is people being cognizant of their students’ and peers’ feelings and concerns. For four semesters now, I’ve been showing students in my introductory American Civil War course portions of "12 Years a Slave." Before doing so, I regularly warn them that the content of the film is graphic – that it contains scenes of brutal violence, racist language, and nudity. I even give students the option to skip class, without penalty, on the days when I show the film – though, to date, I’ve yet to have a single student take me up on this offer.

I do this not because I believe that this film will trigger post-traumatic episodes – I’ll grant that the scholarly basis for "trigger warnings" is flimsy – but because it’s the decent thing to do. Indeed, I’d venture to guess that even the most hardened intellectual – even those academics most inured to the unexpectedly horrifying possibilities of learning – would have appreciated, at the ripe age of eighteen, a fair warning before sitting through three minutes of Solomon Northup’s near-death lynching in "12 Years a Slave": watching, wholly unprepared, as Chiwetel Ejiofor splutters breathlessly with his neck in a noose and his toes in the mud.

To prepare students for scenes like these and to offer them an out is not, and should not be seen as, a trigger warning. It is simply a sign of respect for one’s students, for the wrenching process of learning, and for their ability to make informed decisions about their education and welfare. Sensitive teachers have been doing it for decades – and no doubt many will continue long after the heyday of the trigger warning has passed. Educators’ job, after all, is not to surprise, humiliate, and traumatize their students, but rather teach them how to navigate these challenges with maturity and competence. Contrary to Lukianoff and Haidt’s belief, warning students about disturbing material actually helps, rather than hinders, in this process.

But no doubt the foremost problem with “The Coddling of the American Mind,” as with its comrades in the growing genre of anti-political correctness literature, is its utter obliviousness to the end goal of conversations about trigger warnings and microaggressions.

After all, the people who are promoting these ideas are not, for the most part, trying to stifle free speech; they’re instead trying to create the conditions in which it will flourish. Some of their attempts have, admittedly, been clumsy and excessively punitive. But we should also recognize and respect that many of these campus activists are trying to grapple with a new frontier of bigotry and exclusion — to look beyond the gross legal and institutional prejudice of the Jim Crow, boys-only era of higher education, and instead consider how small, daily, and seemingly innocuous behaviors nevertheless contribute to the present state of racial, gender and class-based exclusion.

Lukianoff and Haidt, in one of their tedious definitional statements, call this "catastrophizing." Well, forgive me — and many others — if I believe that the abysmal representation of black and Latin@ youth in elite institutions of higher learning in fact constitutes a catastrophe, and if I see an implicit link between a culture of microaggressions and the present state of affairs.

I do not want to sanitize or excuse the excesses of this loosely-bound movement. Transgressors of the campus Left have, indeed, been tarred and feathered when a respectful reproach — or even no action at all — would have been more appropriate. Omar Mahmood, booted from the University of Michigan’s newspaper after penning a mild critique of campus culture, looms large among the victims of an over-zealous collegiate Left. So too does the Indiana University-Purdue University student accused of racial harassment for reading a book with an image of the Klan on the dust jacket (although the university, it should be noted, has subsequently apologized for the incident).

But since when have we expected reasoned, un-emotive restraint from 18-to-22 year-olds and novice activists? Certainly, we find no model for such behavior in the annals of Boomer activism, when a rising generation of politically-conscious young people chased the acolytes of apple pie, American exceptionalism, and in loco parentis off campus with torches and pitchforks.

The kids, in other words, are all right. Though prone to excess on occasion — and abetted by liability-obsessed campus administrators, looking for a quick, punitive fix to bad publicity — the basic thrust of their activism is a just one. So, to the critics of "political correctness": get over the linguistic obnoxiousness of terms like "trigger warnings" and "microaggressions," and instead pay closer attention to the deeper intent of students’ actions. If, in the decades to come, America achieves a more just and equitable system of higher education, we’ll thank you for your forbearance.