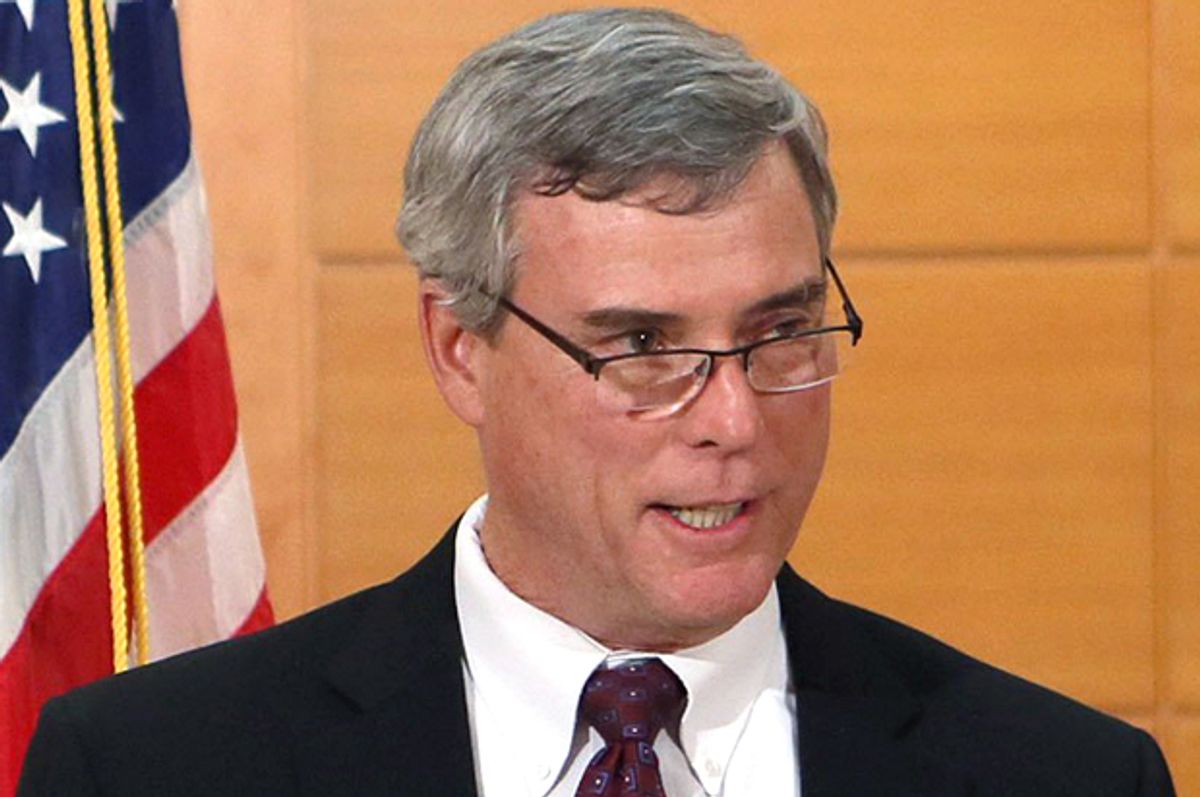 The brutal and iniquitous treatment African-Americans suffer at the hands of their criminal justice system has been a chief topic of conversation in the American mainstream for much of the past year. But the issue got even more attention earlier this week with the one-year anniversary of the death of Michael Brown, the black Missouri teen who was shot dead by Darren Wilson, a white cop. And while public awareness of the more viscerally oppressive elements of the so-called New Jim Crow has undoubtedly increased, this running tally of Americans killed by police from the Guardian shows that the problem is far from over.

For all the attention paid to police, though, it's important to remember that they are just one part of a larger system — and according to a recent report from Stanford University Law School Criminal Justice Center, there's reason to believe that another one of the criminal justice system's most important appendages has problems of its own. As two of the study's co-authors — Professor David Alan Sklansky and Stanford Criminal Justice Center Executive Director Debbie Mukamal — wrote in an Op-Ed for the Los Angeles Times, prosecutors "are in many ways the most powerful officials in the American criminal justice system"; but according to their study, California's prosecutors are far less diverse than the rest of the state.

Recently, Salon spoke over the phone with Sklansky about why the report is necessary, what it found, and what these findings suggest to policymakers and society at large. Our conversation has been edited for clarity and length and can be found below.

Why are prosecutors important?

Prosecutors have been thought for some time to be the most powerful figures in the American criminal justice system. They're powerful because they stand as gatekeepers for the system and because they have enormous discretion [with the system].

What does it mean to stand as a gatekeeper?

And what do you mean when you say they have an "enormous" amount of discretion?

Because the vast majority of criminal cases in this country are resolved by plea bargain, and not by going to trial, the prosecutor's decision about what kind of charges to file — and what kind of plea agreement to enter into — will often effectively determine a defendant's conviction and sentence.

Why the sentence, too?

Because both at the federal and at the state level, we have lots of laws that impose mandatory minimum sentences for particular offenses. So that means that whether the prosecutor charges that offense or not will determine whether the judge is required to impose a particular sentence on a criminal defendant. Charging and plea bargain decisions by prosecutors are subject to little or no review by the courts or by anybody outside of the prosecutor's office.

So those mandatory minimum laws, they've increased the power of prosecutors?

Before your study, what did we know about the demographic breakdown of prosecutors in California?

Very little. And California was no different from the country as a whole in that regard. We've had good statistics for decades now on the race/ethnic/gender demographics of police officers, but we've had virtually no publicly available information about the demographics of prosecutors. Our study was designed to close that gap.

What did you ultimately find?

How do those figures compare to the kind you see in, say, police departments?

Prosecutors are even less representative of the demographics of the state than law enforcement.

Was there a gender disparity as well?

We also found that women were underrepresented in supervisory roles in district attorneys offices in California. Forty-eight percent of state prosecutors are female, but that figure drops to 41 percent among prosecutors with supervisory titles.

Let me play devil's advocate for a moment. Obviously, those figures don't sound good; but is there reason to think this has an adverse effect on the functioning of prosecutors' offices — and the criminal justice system in general?

Our study didn't try to document the effect of race and gender diversity on prosecutorial decision-making. But there's lots of reasons to think that criminal justice agencies that don't reflect the communities that they serve do a worse job securing justice and appearing fair.

Some of that evidence comes from studies of prosecutors offices and some of it comes from studies of other criminal justice agencies. With regard to prosecutors offices, there is some evidence, produced by other researchers, that offices with higher percentages of minority attorneys result lower sentences for minority defendants. There's not a lot of studies like that, because researchers have been handicapped by not having the kind of data our study is providing.

What about with regard to police departments instead?

Studies of police departments have suggested that diversity in the ranks is important for a bunch of different reasons.

First of all, minority members of any organization ... bring their experiences and perspectives into their offices in ways that can change conversations and unsettle longstanding assumptions. Prosecutors make enormously important decisions — not just in individual cases, but on a wholesale level. Prosecutors set policy by deciding what sorts of crimes they want to concentrate on and how they want to enforce those laws.

And then there's the political problems attendant with having a non-diverse agency or office trying to police a diverse population.

Events over the last year in Missouri, New York and Baltimore have reminded us that appearances of fairness in criminal justice are important; and diverse workforces in criminal justice agencies ... help reassure the community that the office is pursuing fairness with regard to members of all the various parts of the community that it serves. So just as police departments can lose legitimacy if their workforces are unrepresentative, there's reason to fear that that can be true of prosecutors offices as well.

And, finally, the job of a prosecutor is a good job.

It's very often a stepping-stone to elected office, judicial appointments or prominent roles in the legal profession. So it's important to make these opportunities fully available to members of all communities in California.

I know this wasn't the focus of your study, but do you have any recommendations for how this problem — the problem of a too-white, too-male prosecutor corps — might be mitigated or solved?

Yes, and we think it's clear that this is not just a problem for prosecutors offices; it's a problem for the legal profession and for law schools to address as well.

And if we want to make prosecutors offices more diverse — and I think we do — we should also be working to make the legal profession more diverse, and in order to do that we need to make the pool of law students more diverse and more representative.